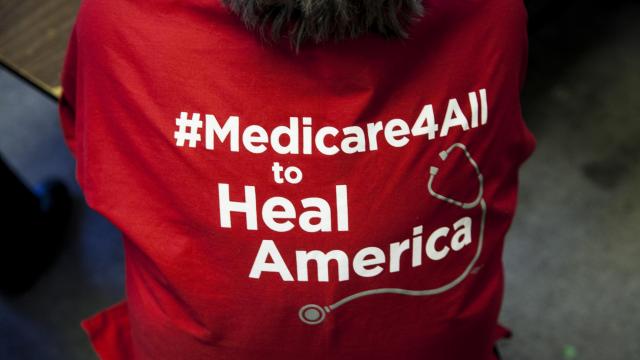 WASHINGTON — The Affordable Care Act was conceived as a mix of publicly funded health care and privately purchased insurance, but Republican attacks, culminating this month in the death of a mandate that most Americans have insurance, are shifting the balance, giving the government a larger role than Democrats ever anticipated.

And while President Donald Trump insisted again on Tuesday that the health law was “essentially” being repealed, what remains of it appears relatively stable and increasingly government-funded.

In short, President Barack Obama’s signature domestic achievement is becoming more like what conservatives despise — government-run health care — thanks in part to Republican efforts that are raising premiums for people without government assistance and allowing them to skirt coverage.

By ending the tax penalty for people who do not have coverage, beginning in 2019, Republicans may hasten the flight of customers who now pay the full cost of their insurance. Among those left behind under the umbrella of the Affordable Care Act would be people of modest means who qualify for Medicaid or receive sizable subsidies for private insurance.

“Republicans have inadvertently strengthened the hand of Democrats like me who prefer richer subsidies to a mandate and welcome the expanded federal role that will come with those subsidies,” said Joel S. Ario, a former insurance commissioner from Pennsylvania who worked in the Obama administration.

In days, the Trump administration is expected to carry out an executive order with proposed rules that would allow people to buy less expensive — and less comprehensive — coverage, through either business and professional associations or short-term private policies.

The Affordable Care Act’s success in reducing the number of uninsured owes more to Medicaid than to private health insurance. About 75 million people are now enrolled in Medicaid, a number that has increased by about one-third since the adoption of the Affordable Care Act. A smaller number, about 10 million, buy coverage from private insurers through the health law’s marketplace.

Among people ages 18-64, the proportion with private health insurance coverage is about the same today as in 2005, according to the National Center for Health Statistics. But the proportion with public insurance coverage has increased to more than 19 percent, from 11.5 percent in 2005, and the share of people in that age range who are uninsured has fallen to 12.5 percent, from about 19 percent.

In total, more than one-third of the population is covered with federal assistance, through Medicare, Medicaid, the Department of Veterans Affairs, the military and Affordable Care Act subsidies. (And that does not include the larger group of people who benefit from tax subsidies for health insurance provided by employers.)

Trump and Republicans in Congress failed this year in their efforts to cut Medicaid and could try again in 2018. House Speaker Paul Ryan said this month that Republicans would try next year to slow the growth of federal health spending because “it’s the health care entitlements that are the big drivers of our debt.”

But Sen. Mitch McConnell, the majority leader, has been leery of another run at health care in an election year, and it is possible that Medicaid could, in the near future, actually grow further under the Affordable Care Act. Maine voters approved a referendum last month to expand Medicaid in that state, though Maine’s Republican governor, Paul R. LePage, is dragging his feet. LePage will not be on the ballot in November, when the state could elect a governor more willing to accept the referendum’s results.

The governor-elect of Virginia, Ralph S. Northam, has vowed to expand Medicaid and could have an evenly split House of Delegates, depending on the outcome of a drawing of lots this week that will decide the winner of a tied race in southeastern Virginia.

A Democratic wave election in November could also shift the balance of power in a few other state capitals.

While the marketplaces, or exchanges, have struggled with a series of problems since they opened in 2014, Medicaid, administered by an experienced corps of state officials, has gone from strength to strength. Public appreciation for the program has steadily increased as people come to understand its importance in the health care system, including its central role in combating the opioid epidemic.

Insurers are still required to provide coverage to anyone who applies. They cannot deny coverage or charge higher premiums because of a person’s pre-existing conditions. And people receiving premium subsidies are generally insulated against insurance price increases.

By contrast, the sharp increases in premiums in many markets this year have made insurance less attractive and less affordable for middle-income people who do not receive subsidies. The brunt of premium increases falls on people who must pay the entire cost themselves — an individual with annual income over $48,240 or a family of four with income over $98,400.

McConnell says he remains committed to bringing to a vote early next year two bills to stabilize insurance markets. One would restore government subsidies to insurance companies to help cover out-of-pocket expenses for low-income customers. Another would offer money to states to lower premiums, perhaps by setting up “reinsurance” programs to cover the highest-cost customers with serious illnesses.

Trump appeared to embrace some kind of bipartisan health care legislation Tuesday with a Twitter post from his resort in Palm Beach, Florida: “Based on the fact that the very unfair and unpopular Individual Mandate has been terminated as part of our Tax Cut Bill, which essentially Repeals (over time) ObamaCare, the Democrats & Republicans will eventually come together and develop a great new HealthCare plan!”

But even with those measures, health policy experts say they expect the Affordable Care Act’s marketplaces to be populated increasingly by consumers who qualify for financial assistance or have clear medical needs.

“It seems to me that the exchanges will evolve into an extended form of government coverage very much akin to Medicaid,” said J.B. Silvers, a professor of health care finance at Case Western Reserve University, in Cleveland. Increasingly, he said, “those who are not subsidized will drop out because of the high prices, and those getting the subsidy will still see great bargains,” after taking account of the subsidies.

When the Affordable Care Act was passed in 2010, the Congressional Budget Office expected that the insurance exchanges would be more important than Medicaid in expanding coverage. The reverse has been true.

“Enrollment in the exchanges is nothing like what anyone expected,” said Daniel N. Mendelson, the president of Avalere Health, a research and consulting company. “Repeal of the mandate will probably serve to take out some relatively healthy people who think they can coast by without insurance. What we will have left is a heavily subsidized high-risk pool for low-income people who are not eligible for Medicaid.” Medicaid covers substantially more people than Medicare, the insurance program for older Americans. Even though only 31 states have expanded Medicaid, total enrollment is about the same as what the Congressional Budget Office was predicting in 2010, when it assumed that all states would expand eligibility under the Affordable Care Act. The Supreme Court ruled in 2012 that the expansion of Medicaid was an option for states, not a requirement.

Congress’ decision to eliminate the individual mandate means that healthier people with less need for insurance are less likely to buy it. The remaining pool of insurance buyers will have higher costs, on average, so insurers will increase premiums even more. And when premiums rise, consumers are entitled to larger subsidies from the federal government to help defray the higher costs.

In some ways, Medicaid is more generous than commercial insurers. The benefits are more comprehensive, and coverage is nearly free, with beneficiaries required to pay only nominal amounts. While Medicaid is a government program, most states contract with private insurers to deliver and manage care.

Among the few companies that have been successful on the Affordable Care Act exchanges are insurers like Centene that have experience in Medicaid.

“The reason so many people are on Medicaid,” said Sara Rosenbaum, a professor of health law and policy at George Washington University, “is that so many people have low incomes.”