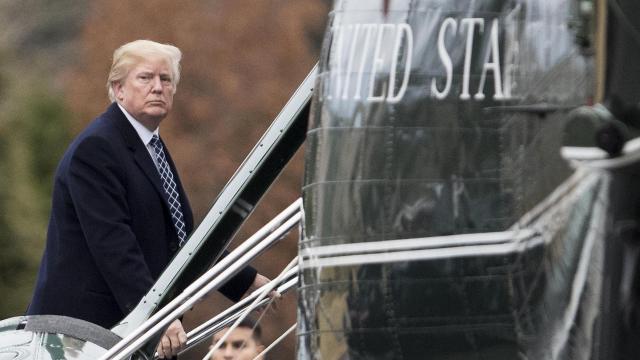 Michael Cohen, Trump's personal attorney, said the President "vehemently denies" the encounter, but did not address the alleged payment in a statement to CNN.

The story, which cites people familiar with the matter, says Cohen arranged a $130,000 payment to Stephanie Clifford -- whose stage name is "Stormy Daniels" -- a month ahead of the election. Cohen denies the sexual encounter took place.

CNN has not independently confirmed The Wall Street Journal's reporting.

"These rumors have circulated time and again since 2011," Cohen said in a statement to CNN. "President Trump once again vehemently denies any such occurrence as has Ms. Daniels." Cohen, once one of Trump's most trusted aides, is no longer in regular contact with Trump -- a distance forced by the Russia investigations, in which Cohen has been entangled.

A White House official said in a statement: "These are old, recycled reports, which were published and strongly denied prior to the election."

The Wall Street Journal reported that Daniels' alleged encounter with Trump took place in July 2006 after a celebrity golf tournament in Lake Tahoe.

In a statement provided by Cohen from Daniels, she also calls the article "absolutely false."

"My involvement with Donald Trump was limited to a few public appearances and nothing more," she wrote in a statement, dated January 10. "When I met Donald Trump, he was gracious, professional and a complete gentleman to me and EVERYONE in my presence. Rumors that I have received hush money from Donald Trump are completely false. If indeed I did have a relationship with Donald Trump, trust me, you wouldn't be reading about in the news, you would be reading about it in my book. But the fact of the matter is, these stories are not true."

CNN asked Cohen, who had provided Daniels' statement, for her contact information, but he did not respond.

Two sources at ABC News told CNN that Daniels was in touch with producers at ABC's "Good Morning America" in the fall of 2016 about a potential interview and was prepared to discuss Trump.