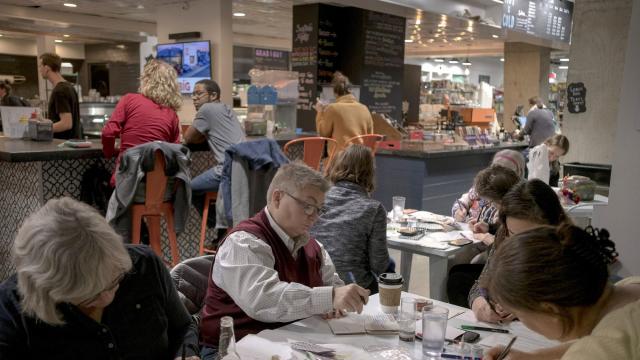 MARIETTA, Ga. — In the big data era of politics, where campaigns are betting millions on software that can harvest hundreds of pieces of information about a single voter, Tony McMullin is making a decidedly different wager.

He is trying to show that elections can be won through the persuasive power of a plaintive handwritten postcard.

It is a battle of quaint vs. quant.

An army of almost 40,000 volunteers, seeking catharsis in the Trump era, have answered McMullin’s call to do more than wring hands, and instead start writing, producing more than 1.5 million postcards since September to try to swing close races in the midterm election. This week, the group aims to send postcards to every registered Democrat in North Dakota to try to win the re-election of Sen. Heidi Heitkamp.

“We called it Sharpie therapy,” said Ellen Bender, who has convened multiple postcard-writing sessions at a Le Pain Quotidien on the Upper East Side of Manhattan. “Instead of throwing the remote at the TV, we would write postcards.”

Beyond psychic soothing, it is not clear that the exercise is actually helping candidates. McMullin, who also goes by Tony the Democrat, started Postcards to Voters last year to motivate supporters of Jon Ossoff, a Democratic candidate in a special congressional election in suburban Atlanta. He lost.

He targeted the August special House election in Ohio with an all-out postcard blitz for the Democrat, Danny O’Connor. He lost.

Undeterred, McMullin, 52, quit his job at SunTrust Bank to oversee the postcard group full time. The midterms have created such demand that he needs dozens of volunteers to keep up with administrative tasks alone.

Still, his work is the political equivalent of a single bookstore trying to compete against Amazon. McMullin says the special election campaign last December to elect Doug Jones to the Senate represents one of the group’s successes; the troops sent more than 380,000 postcards to Alabama voters. But one official involved in the Jones campaign said he had not detected any impact from the postcards.

Still, there is clearly an allure to the volunteers. Postcard writing is more personal than phone banking, more tactile, and, in many cases, more social.

“I think that as you are writing, there’s something going on that’s a connection between your hand and your head, your brain,” McMullin said. “You are envisioning that voter going to the mailbox and getting your postcard. Each time you are writing one, you picture a positive outcome.”

In Zanesville, Ohio, last August, supporters of O’Connor brought their postcards to a fundraiser to show to friends. With so much campaign information flooding their televisions and mailboxes, they were confident a handwritten gesture would make a deeper connection.

“In the postcard, you know you are creating something that stands a good chance of being held, or being put on a bulletin board or a fridge,” McMullin said.

McMullin is transparent about the results of the efforts on the Postcards to Voters home page, which shows that wins have outpaced losses, even though the outcomes cannot be directly attributable to any one factor. They mailed more than 185,000 to back Conor Lamb in a special House election in Pennsylvania.

The midterm elections next week are the latest test. Along with Heitkamp, his group is writing cards to support Phil Bredesen, the Democratic Senate candidate in Tennessee; governor candidates Stacey Abrams in Georgia and Andrew Gillum in Florida; and Democratic candidates in more than a dozen competitive House races. They also are writing for the Senate campaign of Beto O’Rourke in Texas, a Democrat so popular nationally that as soon as McMullin announced the effort, postcard writers on the first day requested more than 33,000 addresses to target.

From his home in this rambling Atlanta suburb, McMullin sat at his command center this week — his dining room table — along with two volunteers, to monitor incoming emails requesting more voter addresses. He provides a script for the writers, then users sometimes add their own flourish, with words or artistic renderings.

McMullin has also put his own digital experience to use with an automated computer program — or “bot” — named Abby that issues the addresses. Analytics software tracks the progress of postcard writing in real time.

The rules are simple. Volunteers have to prepare and submit a picture of a sample postcard so their handwriting can be approved. Those who try to use computers to write the cards are rejected.

Initially, McMullin said he thought the effort would attract introverts who would take on a solitary task. Instead, postcard parties are taking place from New York to California.

He used to scour the internet for elections where he thought the postcards would be helpful. Now, campaigns are asking for him.

“I would not be doing this, taking my own time, if I didn’t think there was a real benefit,” said McMullin, who was weaned on grass-roots politics during Howard Dean’s presidential campaign in 2004.

He said that lawyers have assured him the postcard effort does not run afoul of campaign finance regulations. The cards are mailed to “Valued Voter” or some variation of that, and not to an individual. But the people who write the card usually sign their names. The focus is on infrequent or newly registered voters.

He said he does not make money on the venture, though the group does sell postcards on Amazon. The senders pay for their own postage.

And McMullin is already prepared for Nov. 7, the day after the midterm elections, when presumably, the energy among his volunteers will die down. He anticipates a Senate runoff election in Mississippi in late November, and he will urge postcard writing for the Democrat, Mike Espy, if he makes it through.

“We will definitely write every Democratic voter in Mississippi at least once,” McMullin said, adding, “There’s always an election going on somewhere in the country.”