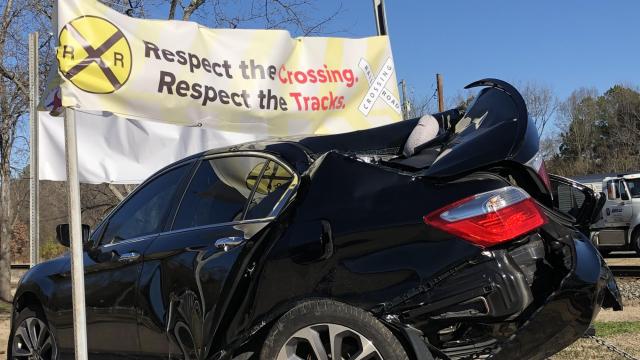 Morrisville, N.C. — A crashed car has been placed at a Morrisville railroad crossing to prove a point -- that trains don't stop for cars or pedestrians.

The North Carolina Department of Transportation and the Morrisville Police Department created the display at the intersection of Morrisville-Carpenter Road and Chapel Hill Road on Jan. 3 to show how dangerous it is to ignore railroad crossing barriers.

No one hurt as freight train slams into car in Cary

The wrecked car, which is from an actual train crash that occurred Nov. 30, will remain there through the end of the month along with a sign that reads, "Respect the crossing. Respect the tracks."

According to officials, three cars and trains have collided at that intersection since 2013. Four people died as a result of those crashes.

The NCDOT said it takes a train traveling at 55 mph more than a mile to stop. Trains always have the right-of-way, even when emergency vehicles are involved.

Officials ask that all drivers keep their cars behind the white lines when waiting at a railroad crossing.