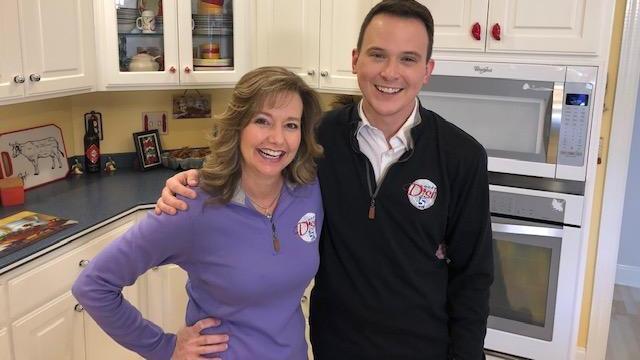 Every Friday on WRAL's Morning and Noon News, reporter Brian Shrader and Lisa Prince, with the N.C. Department of Agriculture, host Local Dish and introduce us to a new recipe featuring food from N.C.

The food looks delicious, but I have always wondered where Brian and Lisa shoot the cooking segment. Turns out, it's a very interesting story. Brian graciously agreed to tell us all the behind-the-scenes goodies.

You can read Brian's story below:

I have guaranteed lunch plans once a month.

That’s when photographer John Cox and I head to Fuquay to shoot a month’s worth of "Local Dish" recipe segments. They air Fridays in WRAL’s morning and noon newscasts. We work with the North Carolina Department of Agriculture’s Lisa Prince to bring you recipes that hopefully give you some good ideas for using North Carolina ingredients.

During each visit, we make four recipes. Lisa and her sister, Michelle, spend a couple of days buying the ingredients and preparing the recipes before we shoot them. They toil in Michelle’s kitchen to make sure the recipes are ready for prime time, making tweaks and planning out the prep work so we can make them easily on television. They have about 23 billion little bowls and dishes to hold the ingredients (I’m glad I don’t have to wash all those dishes after we shoot the recipes). They dutifully put Cling Wrap over each one and group them by recipe.

John and I arrive at Michelle’s telegenic kitchen around 10 a.m. While John sets up his lights and camera, Lisa and Michelle bring out the ingredients for the first recipe. They know the order in which we’ll need the ingredients, and they set them out on the counter. Lisa and I start preparing the dish, stopping occasionally so John can get some close-up shots of the prep work. We’ll usually put the first dish in the oven, letting it cook while we begin doing the next recipe. When we’re finished preparing the second recipe, we’ll take the first dish out of the oven and record the part where I taste it. The second dish cooks while we begin preparing the third recipe, and so on.

Lisa and Michelle may have missed their calling as logisticians. They are excellent managers of materials and time. A couple of months ago, John was on vacation and I was able to get another great photographer, Greg Clark, to go with me on the recipe shoot. The assignment desk needed Greg to shoot a story with reporter Bruce Mildwurf in the early afternoon. I told Lisa and Michelle that we’d have to hurry through our recipes as quickly as possible so Greg could get back to the station. They responded with lightning-quick efficiency and precision. We did four seafood recipes in about 2 ½ hours.

On a typical day, we finish around 1 p.m. and stand around Michelle’s kitchen enjoying the fruits of our labor. We all have a good time while we’re shooting the segments, and I hope that shows on TV. Lisa and Michelle are fellow native Fuquay-Varinians, so we keep each other in stitches with our common experiences of growing up in the ‘Quay. After dropping a tomato on Lisa's "britches" on our first recipe, I think she would agree that I’m not as sloppy as I used to be.

I’m expanding my dining horizons with these segments. I’d never had shrimp and grits before our recipe shoot last month. I’ve really missed out on some good food! I also try to be as honest as possible when I taste the dishes. For instance, I choked back the cucumbers and onions in vinegar. I’m a Southerner, but I may get my card revoked for this: I can’t stand the stuff. But I could tell that if you liked those three things together, you’d love Lisa’s recipe for it.

She’s introducing me to a new world of culinary delight, but I proceed with caution. If I’m not careful, I’ll have to start marathon-training with WRAL anchor Kelcey Carlson in order to keep my waist within the confines of my slacks.

Thanks to Brian for sharing some "Local Dish" secrets!