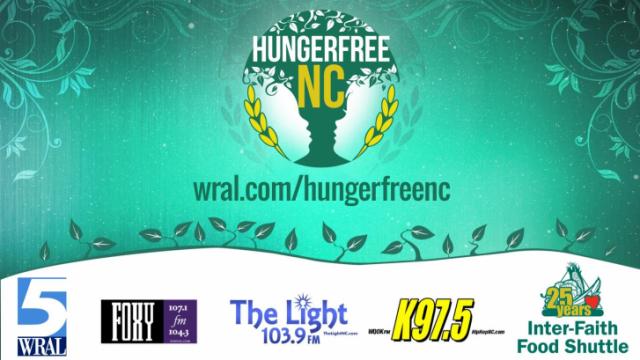 WRAL News anchor David Crabtree focused his weekly half hour program, On the Record, on the topic of hunger with guest Inter-Faith Food Shuttle CEO and Founder Jill Staton Bullard.

WRAL-TV and the three radio stations of Radio One Raleigh hosted a 13-hour fundraiser on TV, radio, web and social media. The media partners have been planning the project for almost a year.

Television ratings show the topic is one of high interest in the market. Each of the four specials was either No. 1 or No. 2 in the time period. Combined, the programs, along with the MEDIAthon, reached nearly 1 million Raleigh-Durham TV households.

The hashtag #HungerFreeNC trended among the top 20 topics in Raleigh for almost a week. It trended No. 1 for 14 hours during and after “A Place At the Table” documentary. For nearly six hours during the MEDIAthon, the topic generated four of the top five most discussed topics in the market.

Using statistics from Simply Measured, the hashtag was tweeted more than 3,200 times by nearly 1,000 unique accounts. It averaged 2.6 million daily impressions, reaching more than 26 million potential impressions over the 10-day run of the campaign. The station used Tagboard to aggregate the hashtag across multiple social media networks and integrated that social element into live television coverage.

“This is the type of project Capitol Broadcasting Company champions,” said Steve Hammel, vice president and general manager of CBC owned WRAL-TV. “We brought North Carolina’s hunger crisis into the light. We educated hundreds of thousands of people in our community. We funneled dollars to an organization we believe has innovative solutions underway. It’s a giant first step, but there is much more work to be done.”

Radio One Raleigh’s Regional Vice President and General Manager Gary Weiss says, “All of us at the Radio One Raleigh stations are exceptionally proud to have partnered with Capitol Broadcasting and Inter-Faith Food Shuttle to raise money for this worthwhile effort and heighten awareness of the critical issue of the hungry in our state. We also thank the many listeners, viewers and those in the business community for their part in helping us attain the level of financial success we achieved in this effort!”

Inter-Faith Food Shuttle CEO and Co-Founder Jill Staton Bullard says, “We are so excited that the conversation has started: Hunger is out of the closet! We know it takes the whole community to overcome the root causes of hunger. We are so grateful that WRAL and Radio One have put the spotlight on this issue and showcased long term solutions. But we’re not done yet and we need everyone to join the movement.”