WRAL reporter Mikaya Thurmond and photojournalist Darrell Pryor were headed down I-40 east in Benson around 4 a.m. when they witnessed an explosion.

"It was almost instantaneous," said Thurmond. "I immediately asked Darrell to pull over." 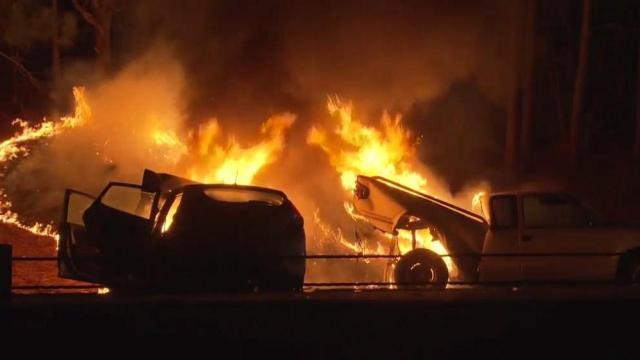 Thurmond called 911 as Pryor hopped out of the news van and ran across the highway to make sure no one was inside either of the two cars involved.

According to Thurmond, one car appeared to be abandoned on the side of the road, and a second car crashed into it.

The team said nearby trees caught fire and other witnesses stopped their cars to help.

Pryor and Thurmond said one woman got out of the car, unharmed, but she was stumbling around and very disoriented. Her first concern was looking for her dog, which apparently was in the car with her and took off after the crash.

I-40 west was closed for about 45 minutes while police and highway patrol officials investigated. Officials are still on the scene searching for the missing dog. 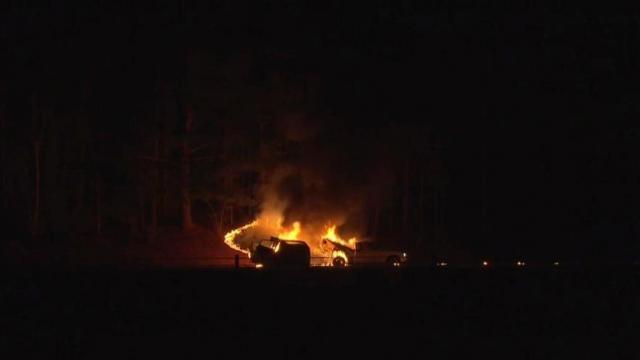 "To witness something like this was so emotional," said Thurmond. "You just start thinking about the people who could be inside and the impact this could have on their families."

The investigation revealed that the car driven by the woman hit a truck that had been tagged on the side of the road yesterday. She has a suspended license and was transported to a local hospital with injuries.

"In our industry, we cover crashes often, but it is rare that we actually see it happen," commented Renee Chou. "You are heroes to us."