WRAL's Coats for the Children telethon raises more than $125,000 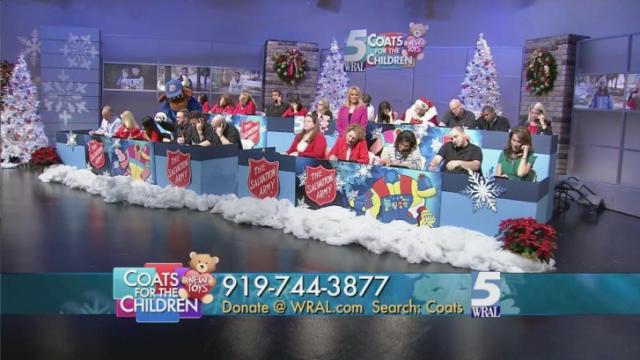 Raleigh, N.C. — ​Thanks to the generosity of viewers, WRAL raised more than $125,000 Friday during its 27th Annual Coats for the Children telethon.

For 27 years, WRAL has teamed up with The Salvation Army for the annual Coats for the Children Campaign. The big telethon kicked off at 6 a.m. on Friday.

There are more than 8,800 children in Wake County who rely on the campaign. The primary goal is to collect warm winter clothes for needy families, but another important part is collecting new toys.

"Each of us grab one on the way out the door each morning, but never think that there are hundreds, maybe thousands, of children in our area that do not have a coat," said Major Pete Costas, area commander of The Salvation Army of Wake County.

Last year, during the 26th Anniversary of WRAL’s Coats campaign, the daylong telethon raised more than $93,000 for the Salvation Army.

Since 1989, WRAL has collected over 150,000 coats and raised $1.5 million to provide winter clothing for Salvation Army families.

"The Coats for the Children campaign is essential to these children. Not only that, but it is life changing,” Costas said. “A coat provides more than just warmth; a coat can provide a child with hope in their time of need.”

From now until Dec. 31 you can donate by searching "COATS" on the WRAL.com homepage.