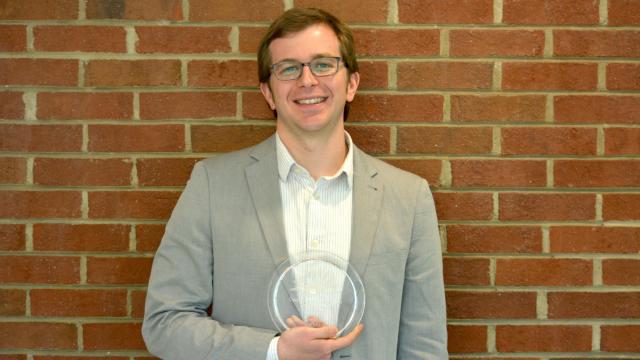 Dukes was recognized for his efforts to make thousands of UNC academic fraud records more accessible to the public and for his reporting on the death of an inmate who was found in the back of a prison transport van in 2014.

First Amendment and media lawyer Hugh Stevens presented Dukes with the award, calling him an "absolutely assiduous and dogged pursuer of public records."

Dukes was nominated by WRAL.com Content Director Jodi Leese Glusco, who wrote that she could "think of no other journalist doing more to make government records accessible to the public through search, analysis and reporting, than Tyler Dukes."

Last fall, after the University of North Carolina at Chapel Hill posted 200,000-plus pages of public records on its website, Dukes noticed that the records were not searchable. The documents were posted as PDFs with no "readable" text encoded in the files, meaning readers couldn't search for names or other keywords and were forced to look through the documents one by one.

To help the public sift through the records, Dukes processed the documents to make the text searchable and created an app to open that search to the public. Users could then easily share what they found.

Dukes was also recognized for his reporting on Michael Kerr, a 53-year-old inmate who was found dead in the back of a prison transport van after he was moved to Central Prison in Raleigh on March 12, 2014.

Kerr was an Army veteran and suffered from schizoaffective disorder that went untreated for at least six months. He was left handcuffed for five days in solitary confinement at Alexander Correctional Institution before prison officials finally transported him to Central about three hours away, where he was expected to received more specialized care.

No charges were filed in Kerr's death, but both federal and state authorities continue to investigate. Meanwhile, 25 people resigned or were disciplined in the wake of the incident, some of whom successfully appealed their dismissals in state courts.

The story was recognized by the Radio Television Digital News Association of the Carolinas for Original Web Reporting.

"His expertise has been instrumental in many probing stories written by him and others in the newsroom," Gall added. "We're proud of the important work he's doing, and it's gratifying to see him recognized for that."

The N.C. Open Government Coalition also gave awards to Jon Elliston, an investigations and open-government editor at Carolina Public Press, who was honored for his public records advocacy, and to Henderson County Attorney Charles Russell Burrell, who was recognized for his work with public records in government.

Dukes said he was honored to receive his award "alongside two champions of transparency from both inside and outside North Carolina government."

"The use of public records is vital to helping us all understand how we're being governed from the local to the federal level, and I'm grateful to work at a news organization that recognizes and supports this critical part of accountability journalism," Dukes said.