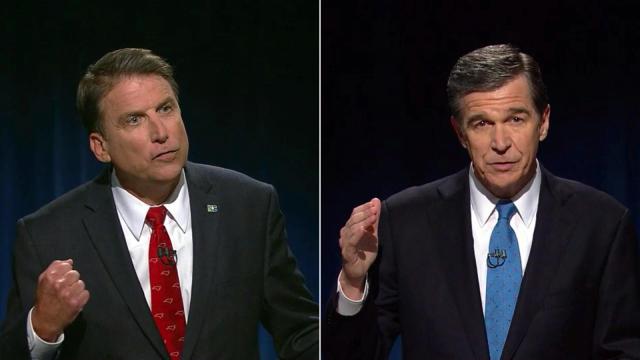 Raleigh, N.C. — The race between Republican Gov. Pat McCrory and Democratic Attorney General Roy Cooper has tightened in recent weeks, and the two men are in a virtual tie days out from the election, according to the results of an exclusive WRAL News poll released Tuesday.

SurveyUSA polled 659 people statewide who have already cast their ballots or are likely to vote between Friday and Monday and found the Cooper leads McCrory 48 to 47 percent. The poll has a margin of error of +/- 3.9 percentage points.

In a WRAL News poll conducted three weeks ago, Cooper held a 48 to 44 percent advantage.

McCrory appears to have benefited from his high profile in the wake of Hurricane Matthew, and 39 percent of respondents rated his handling of the disaster preparation and recovery effort as excellent, with another 31 percent said his efforts were good. Only 6 percent said he did a poor job of responding to the storm.

At 45 percent, the governor's approval rating is the highest it's been in the four WRAL News polls conducted this year, and it's only 1 point below his disapproval rating, which is the closest he's come in the four polls to breaking even.

Meanwhile, Cooper's approval rating remains far ahead of his disapprovals, 47 to 33 percent, although 20 percent are still undecided about his performance as attorney general.

The WRAL News poll also asked about three issues that have been at the forefront of the gubernatorial campaign: the economy, education funding and House Bill 2, the state's controversial law on gay and transgender rights.

McCrory has campaigned heavily on the state's improved economy, which he's dubbed the "Carolina Comeback," but he and Cooper are virtually tied among voters who say the economy plays a large or some role in their choice for governor.

Cooper has pressed the governor on North Carolina's low national ranking in per-student spending and average teacher salary, and about three-quarters of Cooper supporters said education funding strongly influences their vote, compared with only 42 percent of McCrory supporters.

Cooper also has criticized McCrory repeatedly over House Bill 2. Sixty-eight percent of Cooper supporters and 52 percent of McCrory supporters said the law would have a strong influence on their vote for governor.

Breaking down the overall results, the gender gap has widened in recent weeks. McCrory's lead among men has grown from 5 to 12 points, while Cooper's lead among women has increased from 12 to 14 points. Cooper has moved ahead among voters ages 18 to 49, while McCrory has overtaken his opponent among voters 50 and older.

McCrory has narrowed the gap in metro areas across the state while maintaining a 17-point edge among rural voters. In early October, Cooper held a 62 to 29 percent advantage among urban voters, but that has dwindled to 58 to 39 percent. Among suburban voters, his lead has dropped from 12 to 6 points.