Raleigh, N.C. — North Carolina voters say a new law has hurt the state's image and job prospects and should be completely or partially repealed, but they believe people should be required to use public bathrooms that correspond to their birth gender, according to a WRAL News poll released Tuesday.

The results reflect the ongoing struggle statewide with the Public Facilities Privacy & Security Act, commonly referred to as House Bill 2, since it was signed into law almost three weeks ago following a one-day special legislative session. The law prohibits transgender people from using public bathrooms that correspond to their gender identity, excludes gays, lesbians and transgenders from discrimination protection in employment and public accommodations and bars cities and counties from extending such protection to them.

Since the law was passed, North Carolina has been publicly ridiculed by comics and pundits and criticized by corporate executives and celebrities. On Tuesday, Deutsche Bank became the latest firm to hold off on expansion plans in the state, freezing an expansion of its operation in Cary, because of the law.

SurveyUSA polled 779 registered voters across the state for WRAL News between Friday and Monday to gauge their opinions on House Bill 2 and its fallout. The poll has a margin of error of plus or minus 3.6 percentage points.

Half of those surveyed disapprove of the law, while 38 percent approve of it and the remaining 12 percent aren't sure. Women and blacks show more hesitancy toward the law than men and whites, and support for the law breaks along political ideological lines, with conservatives strongly in favor and liberals opposed. 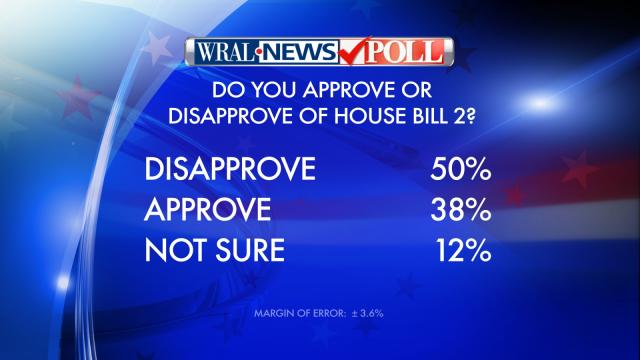 When the specific provisions of the law are examined, however, those clear lines become more jumbled.

On the bathroom provision, 56 percent said they somewhat agree or strongly agree that transgender people should use the bathroom that matches the gender listed on their birth certificates, not one that aligns with their gender identity. Thirty-four percent somewhat disagree or strongly disagree with that provision. Meanwhile, 56 percent also said that allowing a transgender person to use a women's bathroom poses a security risk to women and children, while 35 percent disagreed with that stance.

Republican legislative leaders called the special session after the Charlotte City Council approved an ordinance allowing transgender people to use the bathroom in which they feel more comfortable. The lawmakers said they needed to take immediate action to prevent sexual predators from going into women's bathrooms under the guise of being transgender. 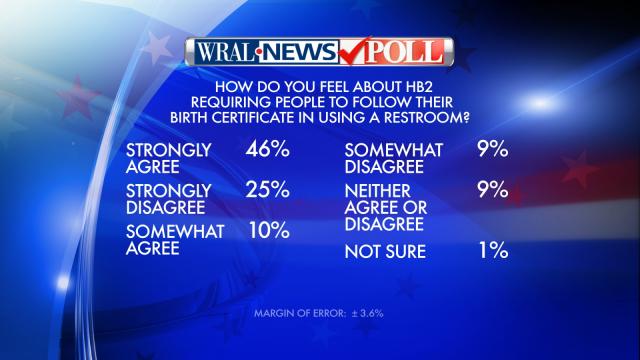 People in Charlotte had the strongest response of any metro area in supporting the bathroom provision of House Bill 2 at 62 percent – 55 percent of Triangle respondents and 48 percent of those in the Triad agreed with it – and believing that transgender bathroom use poses a risk to women and children.

The discrimination provisions of the law are opposed by a majority of those polled, with 52 percent saying protections should include the LGBT community and 36 percent saying they shouldn't. Younger people and minorities provided some of the strongest support for extending protections to gays, lesbians and transgenders, while conservatives and evangelicals were the staunchest opponents. 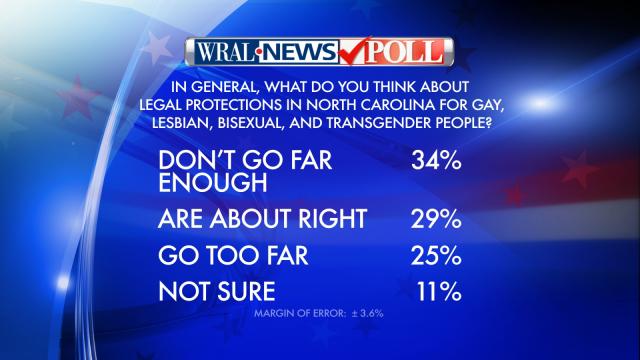 About a third of respondents said legal protections for gays, lesbians and transgenders don't go far enough in North Carolina, while 25 percent said they go too far and 29 percent said they are adequate. Younger voters, minorities, independents and liberals said more protections are needed for the LGBT community, while older voters and conservatives said too many protections already exist.

People who identify themselves as "very conservative" were the only group that clearly believes House Bill 2 has helped the state's image, at 41 to 28 percent. Responses from those who identify as "strong Republicans" were just outside the margin of error, at 39 to 35 percent. Neither of those groups, however, back the stance that the law has helped bring new business to the state.

More than three-fourths of respondents said House Bill 2 needs to be changed, with 37 percent backing an all-out repeal. Twenty percent said the bathroom provision should be the only portion to remain on the books, while 19 percent said other changes should be made. Eighteen percent said the law should remain as is. 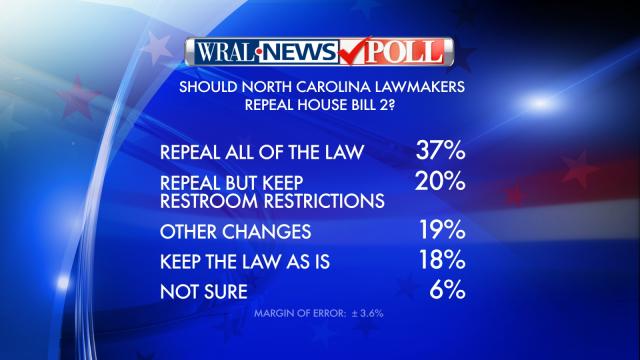 Conservatives and Republicans again provided the staunchest support for keeping the law intact, but evangelicals were evenly split on the question, with 26 percent saying it should be left alone, 23 percent calling for a complete repeal, 21 percent in favor of retaining the bathroom provision and 23 percent saying other changes should be made.