WRAL News poll: HB2 could have impact on fall campaigns

Conducted by SurveyUSA exclusively for WRAL News, the poll found Republican Gov. Pat McCrory trailing Democratic challenger Roy Cooper 43 percent to 47 percent, with more than two-thirds of voters saying that a politician's position on the bill will either "strongly" or "somewhat" influence their votes.

"Probably the past two weeks have taken a toll on McCrory, and he needs to hope for a short 'short' legislative session this summer so he can get into the summer and re-balance the political equation," said Michael Bitzer, a professor of political science at Catawba College.

McCrory has defended the bill after signing it only hours after it passed the General Assembly on March 23. Cooper has labeled the bill "a disgrace" and refused to defend it in court.

"For both McCrory and Cooper, it's a dynamic that probably both of them want to go away, except that it seems to energize their respective bases," Bitzer said.

Both of the candidates have used House Bill 2 to raise money and have been regularly communicating with supporters about the bill. 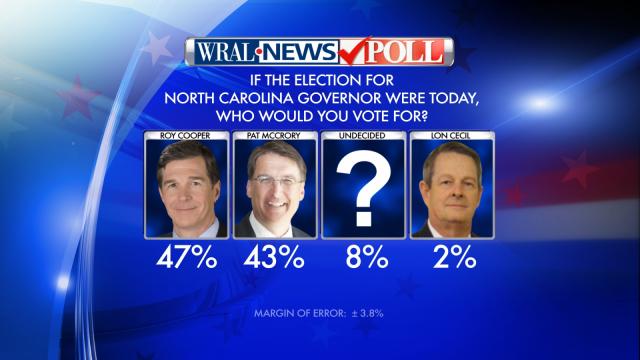 The poll's margin of error is plus or minus 3.6 percentage points, meaning that Cooper and McCrory are still in a statistical tie. However, the result is the reverse of a finding by liberal-leaning Public Policy Polling, which found McCrory leading Cooper by 2 percentage points just before lawmakers passed House Bill 2.

It's unclear whether House Bill 2 played a role in Cooper's overall lead on McCrory. The numbers of voters who said they approve or disapprove of McCrory's job performance did not move significantly between a WRAL News poll released just before the March 15 primary and this week's survey. However, Cooper's approval rating climbed 18 points during the same time period.

Similarly, only 30 percent of respondents said they approve of the job the North Carolina General Assembly is doing, with 51 percent disapproving. Those numbers are about the same as a month ago.

Of respondents likely to cast ballots in November, 58 percent said a candidate's position on House Bill 2 would strongly influence his or her vote, while another 24 percent said a candidate's position would somewhat influence his or her vote. Only 14 percent said the bill would have no impact. Voters who identified themselves as strongly liberal or conservative were more likely to report that the measure would have a strong impact on their votes. 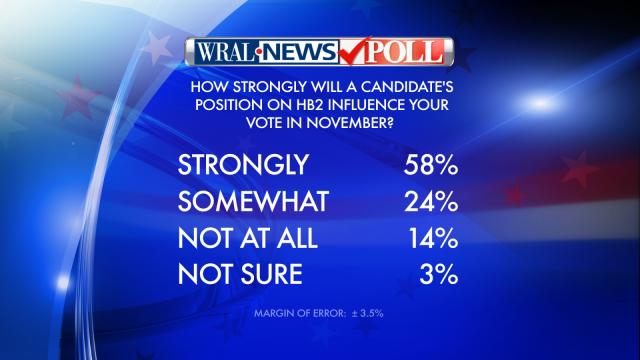 "It's one of those cultural issues that can get legs," said Carter Wrenn, a veteran Republican political consultant. "It has landed in politics where it has gotten plenty muddied up, but it's a cultural issue."

Wrenn said it was typical for partisans to feel more strongly about an issue like House Bill 2. But 56 percent of voters who identified themselves as truly independent – leaning neither Republican nor Democratic – said it would also be on their minds when they go to the polls.

Gary Pearce, a longtime Democratic consultant, pointed out that the law has dominated newspaper headlines and local television news and has even been featured on national news programs.

"Here's the one thing that is different right now – there's an enormous amount of coverage. It dominates anything else in North Carolina politics. The question is, will that continue?" Pearce said.

If the intensity of news coverage slackens, he said, so will electoral passions with regard to the bill.