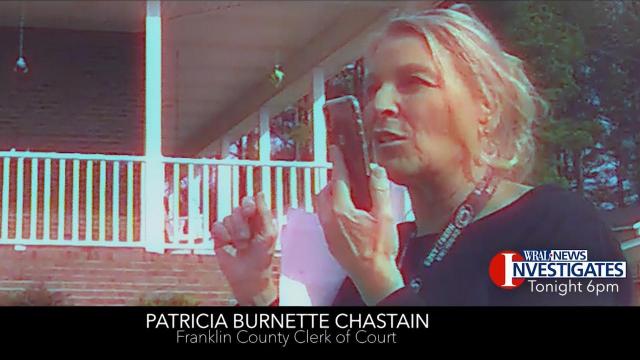 A local clerk of court accused of overstepping her bounds in a WRAL Investigation now finds herself answering questions from the state auditor. During a recent audit of the Franklin County Clerk of Court, auditors found five areas of non-compliance.

First, the office did not record bank reconciliation adjustments identified by the North Carolina Administrative Office of the Courts. Despite a high percentage of problems discovered in records audited, only $310 was involved in the transactions. In response, the clerk, Patricia Burnette Chastain admitted some employees were not trained properly.

Second, auditors found the clerk’s office did not do enough to find the rightful owners of unclaimed property and submitting some of those funds to the State Treasurer’s Office. In some cases, auditors noted there was no evidence the clerk’s office tried to find the rightful owner of the property. Chastain admitted new employees were not properly trained and instituted new monitoring measures to prevent the issue from happening again.

Auditors noted about $5,000 in estate transactions that were not handled properly. Chastain said her staff improperly tried to make phone contact with estate representatives, instead of written correspondence. She also admitted some calculation errors.

Fourth the on list was issues was guardianship proceedings where the county or the an appointed person oversees the estate of children or incapacitated adults. There were instances where guardians did not have the proper level of bonds to cover money in estates. Auditors also noted concerns with annual estate inventory reports.

Earlier this year, WRAL Investigates was contacted about Chastain and her involvement in a dispute between two neighbors. Body camera footage from a Franklin County deputy who was called to the scene by Chastain showed her trying to mediate the dispute in the field. The plaintiff, Adam Diaz, felt Chastain was overstepping her bounds and went beyond the role of the clerk of court.

'I'm telling you the law': Questions about Franklin County clerk of court's actions

Chastain told WRAL Investigates it was never her intention to intimidate the Diaz family and called the whole ordeal a misunderstanding. She later admitted to WRAL Investigates that she did not read the entire court file, including a restraining order obtained by Diaz against his neighbor, before she decided to visit both homes and get involved.