Viewers can now get more news from the largest news team in North Carolina with the permanent addition of WRAL News at 7 p.m. on WRAL. With the announcement of this additional half-hour of news, WRAL also announces a new anchor team at 4 p.m., pairing Lena Tillett with Kathryn Brown on the desk. Meteorologist Kat Campbell rounds out the 4 p.m. team, a position she already holds. 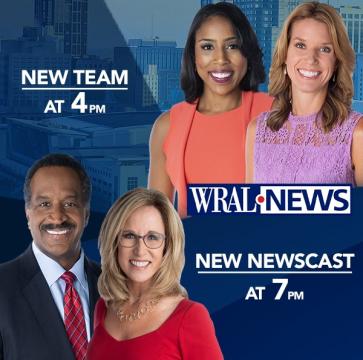 “I’m thrilled to join Kathryn Brown and Kat Campbell, two people for whom I have much respect,” said Tillett of the new assignment. “I look forward to the tremendous opportunity reaching viewers at a new time slot to serve our community.”

Since joining WRAL in 2016, Tillett’s role has continued to evolve. She was instrumental in the debut and expansion of the WRAL Live Center and helped launch the 9 a.m. newscast on FOX 50 last May. Tillett will continue anchoring at 9 a.m. on FOX 50 with co-anchor Ken Smith.

“Lena has demonstrated an outstanding on-air presence, in-depth news knowledge, and great versatility over the last four years,” stated Rick Gall, News Director of WRAL. “The 4 p.m. team of Lena and Kathryn allows WRAL News to build an even stronger arsenal of anchors while we continue to expand our news footprint.”

With Lena’s move to 4 p.m., Ken Smith moves to join the WRAL Morning News team in the WRAL Live Center beginning each weekday at 4:30 a.m. in addition to his daily anchor duties at 9 a.m. on FOX 50.

The arrival of the coronavirus pandemic in March gave rise to the need for unprecedented, specialized news coverage unlike anything in recent history. WRAL added daily 30-minute news specials under the banner of “Facts not Fear” at 7 p.m. to give viewers additional context and more detailed coverage of the rapidly changing story. Viewers responded positively, revealing an appetite for local news at 7 p.m.

WRAL's new 7 p.m. newscast is a hard news, fast-paced newscast with the ability to go in-depth on issues like coronavirus and the recent protests in ways that truly differentiate it from others. Debra Morgan and Gerald Owens anchor the new half-hour of news, David Crabtree contributes probing interviews on special topics, and meteorologist Kat Campbell is in the WRAL Severe Weather Center.

“The response from viewers for additional news content at 7 p.m. has been very strong,” said Joel Davis, VP & General Manager of WRAL-TV & FOX 50. “It became clear that not only was 7 p.m. a more convenient time for many viewers, but there was also an appetite for longer form story-telling and interviews.”

With the new 7 p.m. newscast, several changes to the programming line-ups on both WRAL and FOX 50 were necessary.