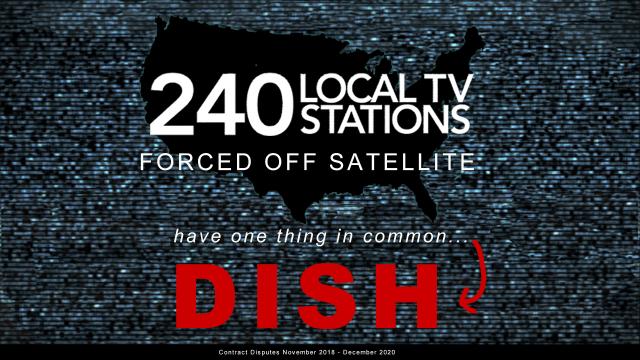 We are continuing to negotiate with DISH in an attempt to reach a fair new agreement.

You deserve to get the NBC, FOX and local news programming that you pay them for. Call DISH customer service at 1-800-333-3474 and tell them to return WRAL and FOX 50 on their pay-TV service.

Today marks four weeks since WRAL and WRAZ were removed by DISH. We are very sorry local viewers have been caught in the middle of this dispute. Unfortunately, there is still no progress to report. As noted in previous updates, we urge our viewers to search “DISH dispute” to learn more about how DISH has taken 240 local stations off the air in the past two years in similar disputes. The articles shed light on the efforts by DISH to rewrite contracts in a way that totally favors them and harms the local broadcasters. That is the heart of this dispute.  We continue to urge customers to call DISH and demand they negotiate. You should also ask for a rebate or refund from DISH since you are not getting what you are paying for.

There is no substantial progress to report in talks with DISH, unfortunately. As we’ve mentioned in earlier updates, DISH continues to insist on rewriting the basic contract by which we’ve done business for the past two decades in a way that becomes inherently unfair and burdensome to local broadcasters like us.

That means the NFC Championship game this coming weekend between Tom Brady and the Tampa Bay Buccaneers versus Aaron Rodgers and the Green Bay Packers may not be able to be seen in DISH households.

Additionally, these homes continue to miss out on WRAL News during a critical time in our state and nation. The last major ratings period (Nielsen, Nov 2020) shows the #1 most viewed local and national newscasts in the market and specifically in DISH households came from WRAL. WRAL News also recently won the award for Outstanding News Operation in the Carolinas along with the award for Best Newscast from the RTDNAC (Radio Television Digital News Association of the Carolinas).

If you are tired of missing your favorite shows, sports, and WRAL breaking news coverage, call DISH at 1-800-333-3474 and tell them you want WRAL and WRAZ back.

We continue to work on getting a fair agreement in place with DISH, but we have little progress to report. This coming weekend three of the four NFL playoff games will be on Capitol Broadcasting stations, including the battle featuring Tom Brady and Drew Brees. Those games will not be seen in DISH households unless this is resolved. If you are tired of missing your favorite shows, sports, and WRAL breaking news coverage, call DISH at 1-800-333-3474 and tell them you want WRAL and WRAZ back.

As previously mentioned, based on DISH’s recent history with other broadcast stations, we believe that it could be weeks or months before DISH will be willing to strike a fair deal with us. So, unfortunately, as of today, we do not have any progress to report.

If you are tired of missing your favorite shows, sports, and our breaking news coverage, call DISH at 1-800-333-3474 and tell them you want WRAL and WRAZ back.

Thank you for your continued support.

We have some bad news to deliver. Unfortunately, we have still not received a proposal from DISH in response to our proposal we provided them nearly a week ago, on Tuesday, Dec. 29.

Based on our review of the other 240 TV stations that DISH took down in the past two years, we must regrettably inform you that the current contractual impasse with DISH is likely to be an extended one. We feel that it is important for you to know this information so that you can plan accordingly, especially since three of the NFL playoff games this weekend will be on WRAL and FOX50, including Tom Brady’s playoff debut with Tampa Bay and the Steelers-Browns showdown.

We remain committed to achieving a fair deal, but that will not be possible until DISH is willing to engage with us.

DISH Subscribers: Many of you have called or written asking about the details of the current negotiations. It is our practice not to share the particulars of our private business negotiations. Nevertheless, because we know this is important to you, we wanted to share what we can with you.

We left a proposal with DISH on Tuesday, Dec. 29, and are waiting for them to respond. If you do a Google search for “DISH dispute,” you’ll find that 240 channels have been taken off DISH in the past year and a half alone. Many involve companies such as The E.W. Scripps Company, which owns 60 television stations and which never had had any type of dispute before. In those cases, like our case, there is a lot of concern about DISH trying to rewrite the basic contract by which we’ve done business for the past two decades in a way that becomes inherently unfair and burdensome to local broadcasters like us.

We’re sorry you have lost our channels during this dispute, and we are hopeful DISH will negotiate to restore service as soon as possible.

Thank you for your concern and support.

DISH Programming VP Melisa Boddie has stated to customers and local media outlets that they “…offered an extension to keep these stations up for customers while negotiations continued, but Capitol never responded.”

That is simply not true. A negotiation requires both parties to participate fully, and, at this point, Capitol has not yet received a return proposal from DISH to our last proposal that was submitted before this dispute began.

Since November 2018, DISH has lost at least 240 local and regional stations across the country due to failed negotiations. The common denominator? DISH.

Why did this happen?

WRAL and FOX 50 have fallen victim to the same fate as hundreds of other local TV stations across the country, removed by DISH after they refuse to reach a fair agreement to carry our stations.

Welcome to the modern-day David vs. Goliath. We are one of the few small, locally owned broadcasters left in the country. As the broadcasting business changes, we're fighting for our livelihood and our ability to bring you the exceptional news and programming you expect. WRAL and FOX 50 are locally owned and operated in Raleigh, by Capitol Broadcasting Company, a business that has served our local community for more than 60 years. We are now and have always been, family-owned and operated.

Who is Goliath in this scenario? DISH network. DISH is a massive, $13 billion corporation very skilled at putting the squeeze on small companies like ours and using their marketing machine to tell the story they want you to believe. What is happening to us has happened to local stations all over the country.

This is a contract dispute about what's fair. We're a local, family-owned company up against a giant corporation. We hope you'll stand with us for what's right. DISH is profiting from our stations in the millions, at our expense. As two of the most watched channels in their entire lineups, we are asking for a fair price for our product. And we've decided that we aren't going to be bullied.

WRAL and FOX 50 are free to watch over the air with an antenna. DISH charges you to watch them on your television. The law requires all satellite and cable companies to negotiate with local TV stations for the right to carry the television signals on their paid services. Since they charge you to watch our free channels, we are allowed to charge them a carriage fee. It's the law. Since we do not control what they charge you for our channels, the only thing we can do is negotiate a fair price for our product, which is what this is about.

What can I do?

Tell DISH you want WRAL and FOX 50 back.

The bottom line is this, your contract or agreement is with DISH. Call the number on your bill, tweet them, post on their Facebook page and tell them you don't want to pay for a service that does not include WRAL and FOX 50 and you expect those channels returned. Ask them for a rebate for every day our channels are off the air.

While we know you're frustrated about missing your shows, we want you to know the truth. We are choosing to not be bullied into essentially giving away our programming to a company that resells it so they can make millions. We do not think it is right. So, we are standing up for ourselves. We encourage you to do the same thing.

If we cannot come to a resolution, you could lose our TV stations on DISH for good. So, if you want our channels back on, let them know it.

Where can I watch WRAL and FOX 50 news?

All WRAL newscasts are available live right here on WRAL.com or you can stream the newscasts live on Roku, AppleTV and Fire TV. Just download the WRAL app on those devices.

Where can I watch NBC or FOX network shows?

Our channels remain available on Spectrum, DIRECTV, and all other cable companies serving this television market. You can also watch NBC and FOX network programs with an antenna.

Our very reputation has been built on integrity and community service. We did not want you, our viewers, in the middle of this. We even extended our contract multiple times to try to work it out. We are very sorry for the inconvenience to you.

How can I stay up to date?

We will keep your posted on this page: keepmylocalstations.com.

If there are any updates or changes, we will let you know immediately.