Worry without answer as US agriculture secretary meets with NC farmers

Mount Olive, N.C. — The nation's secretary of agriculture brought no easy answers with him Monday for farmers worried that the one-two punch of hurricanes and a trade war will knock them out of business.

In a pair of question-and-answer sessions, Secretary Sonny Perdue heard from farmers who are frustrated and trending toward desperate with weeks to go before new crops go into the ground.

A trade war has stopped the flow of tobacco to China, once the crop's No. 1 buyer. Trade deals with Mexico and Canada have been reworked, but their approval depends on Congress. A pair of hurricanes devastated crops across this part of the state two out of the last three years.

"It's the most critical time I've seen in agriculture, and I started farming in 1975," Jerome Vick told Perdue.

Take this message back to Washington, Vick said: "This is not just a bump in the road. In eastern North Carolina, the house is on fire."

Take this one back, too, Brent Leggett said, reading a text message from his 12-year-old son, Colin: "Tell (Perdue) to tell Trump to make a deal with China."

Hundreds of people applauded in a cafeteria at Mount Olive University. They had packed the room until it was difficult to move. They did not sound angry, but frustrated. North Carolina Farm Bureau President Larry Wooten would later say they felt futility.

Perdue expressed some optimism that a deal will be struck "soon" with China. But the secretary, who has been in the agriculture business himself in Georgia, said the negotiations are not unlike farming.

You must do things in order, and there's a patience to it, he said. Short-term pain yields long-term gains, he said, and President Donald Trump is "in it for the long game."

The message was little comfort for some, though others said they felt heard, at least, during the Q&A sessions.

Perdue told reporters after the events that there was little sense sugarcoating his message because farmers can "smell what you've been stepping in." At one point, he told a produce grower worried about falling prices that the core issue was that's "the way the economy works." 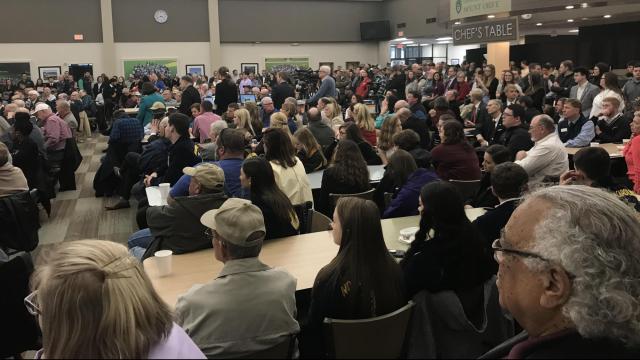 The secretary said he hopes to see new federal disaster funding for North Carolina move through Congress soon. He called on farmers to pressure their representatives to approve the U.S.-Mexico-Canada Agreement, which is a trade deal to replace NAFTA.

Perdue said his agency is looking at regulatory changes to make it easier to bring in labor through guest-worker programs. He also said he's working to freeze adverse wage rates that a number of farmers complained are too high.

But Perdue said major changes to immigrant labor rules will have to wait for a broader bargain on immigration reform, which has been caught up in the fight over Trump's border wall.

The recent government shutdown will likely delay implementation of the new Farm Bill, he said, but not by the month-plus the shutdown lasted. He didn't even want to contemplate a second shutdown, which could come as soon as Friday, when another budgetary deadline hits.

The federal government authorized tariff supports last year to help farmers weather trade battles with China and other countries, but several farmers said Monday those won't help them. The programs depend on crop yields, and much of North Carolina's harvest was wiped out last year by Hurricane Florence.

Perdue said farmers would have to rely on other safety-net programs, like crop insurance. The coming disaster recovery bill should also help, and several farmers thanked state officials in attendance Monday for funding that the state government has put up to help.

But Wooten said morale among farmers is probably as low as he's ever seen it. Prices are low, tariffs are choking trade, the storms were tough and hog farmers are still stung by a series of nuisance lawsuits that have returned multimillion-dollar verdicts against Smithfield Foods, the world's largest pork producer.

Stop-gap funding from the government goes only so far, Vick, who has been farming for decades, told Perdue.

"We all hang around the mailbox every day." he said. "A disaster check ... is really good, bBut it's going to take more than that."