Working gallery peels back the curtain on the Washington arts scene 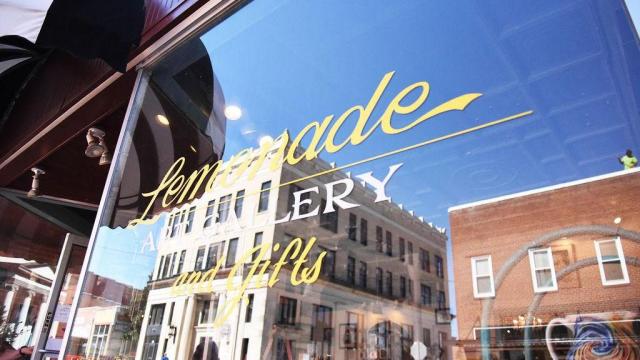 With six art galleries serving its population of around 10,000, Washington's art scene rivals cities three times its size. While several of these galleries only house one or two artists, a handful of them are dedicated to providing a space for dozens of diverse artists, like the Lemonade Gallery.

Created five years ago, the Lemonade Gallery was started by a small group of creatives whose previous building was under foreclosure. Now, just two of the original artists remain to run the gallery — Sue Beck and Carol Mann — but the five studios in the building serve as space for 22 other local artists.

For Beck and Mann, the Lemonade Gallery was the epitome of turning a sour situation sweet.

"The reason we got the name Lemonade is because we decided at that point that we were going to make lemonade out of the lemons that were handed to us when our previous space was foreclosed upon," said Mann. "We're trying to keep the types of artists we house very diverse — we're careful about who's in the gallery so our artists aren't competing against each other. We try to limit how many watercolors, how many oil painters, how many jewelry makers, and so on that we have at one time."

Beck and Mann themselves have quite different backgrounds in the art world. For Mann, her interest in painting and watercoloring started as a way to illustrate a cookbook she was writing. Ten years later, she's now teaching watercolor lessons and creating commissioned pieces for clients.

Beck had a similarly unorthodox introduction to the art world. While she moved to the area in 2005 to run a dinner cruise boat with her captain's license, her previous background was mostly in dentistry. Using the skills she developed from shaping wires for things like braces and retainers in the dental office, Beck started experimenting with jewelry making.

"Going from dentistry to something like jewelry making is actually not such an unusual thing. When you're in dental school, you're taught how to cast crowns and gold, and you're used to the manual dexterity and working in miniature spaces," said Beck. "So a lot of dentists will take the gold fillings and things out of people's teeth, and they'll make gold jewelry out of it. I started playing with silver and gold wire, and I was approached to go into another art gallery — I did, and the first day that my things were there, something sold."

While both women had prior careers, the rich creative scene in Washington has helped them make their art a priority. There are several other galleries around town, but none like Lemonade Art Gallery. Since it's a working gallery, guests are free to walk through studios while artists are creating. Not only does this create a bond between the public and the artists, but it also leads to more business for those in the studio.

"People like to see the artist work and connect with them in that way, so whenever I'm working in the gallery, people are free to observe and ask questions. Sometimes when I'm teaching in the small classroom in the back, I'll leave the door open and encourage people to sit down and listen for a while or ask questions," said Beck. "They like to connect and see who they're buying from when they buy a painting, and I really think that connection makes people more apt to support local artists."

Washington may not be the size of most other communities that boast six art galleries, but there's no tension between the artists who call the town home. In fact, if an artist in Beck and Mann's gallery doesn't offer what a customer is looking for, the two are more than happy to refer them to a gallery around town that has what they need.

"If we don't have what they're looking for, or if they just want to explore what other galleries in town, we have art walks here in town, and we encourage people to walk around and browse all the galleries. So we try to support one another," said Mann. "Washington has become an artsy community and the town really does a lot to promote the visual and performing arts around town."

This collaborative spirit helps keep the art community in Washington alive and thriving. Moving forward, Beck and Mann hope to continue harnessing the support for the local arts community by creating a digital footprint for the Lemonade Gallery. Currently, the two are in the midst of designing a website that will feature a full inventory of the over 1,500 pieces for sale in the gallery. Although partially spurred by COVID-19, the website will serve as another way to generate interest in the work of local artists.

As downtown Washington is also wrapping up a streetscape project, Mann and Beck are ready to welcome in guests once some of the uncertainty subsides.

"It's an artsy little town, and while we're trying hard to promote the arts, the town is a huge help," said Beck.