Work Spaces, for Women Only 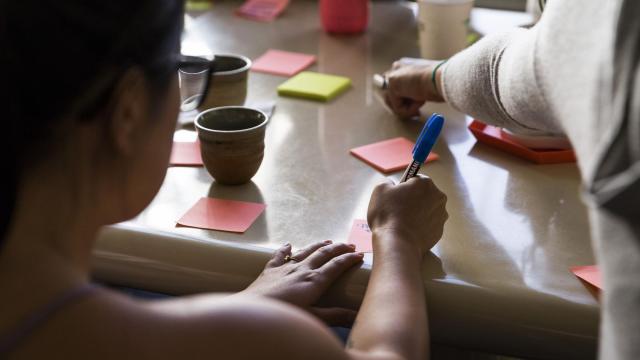 LOS ANGELES — Most wage-earning women have gone through some version of this prework routine: Assemble appropriate outfit (not too flashy, not too drab); add layer to protect against office elements (central air-conditioning; the leering); maybe steel yourself for mansplaining (or worse).

A desire for comfort, both physical and mental, has fueled the growth of women’s-only co-working spaces — some highly branded, like the Wing, and with significant membership fees.

Quilt, a six-month-old startup based in Los Angeles and founded by Ashley Sumner and Gianna Wurzl, is designed differently. Its members, who number around 1,000, work out of one another’s homes in four-hour sessions, and in lieu of annual dues, they pay per-session fees, usually around $20, of which hosts keep 80 percent (some of which they may spend on snacks and drinks).

Hosts have the option of researching who is coming to their home before they open their door, but Sumner said that thus far, all hosts have opted to confirm those who sign up, sight unseen. Guests and hosts can give feedback, though reviews remain internal. (A Yelp for personalities seems problematic.)

The company also organizes one-hour morning coffee chats and longer “learn” sessions on evenings or weekends, during which female experts in various fields expound on their knowledge — be it raising venture capital or reading tarot cards — in their own homes or those of friends.

As on Airbnb, potential hosts list their home’s available spaces on Quilt’s site — listings in South Carolina, Peru, Toronto, Barcelona and Portland, Oregon, are all waiting for approval — and specify how many people they can accommodate. (Such arrangements will be more difficult in New York or Tokyo, where living quarters tend to be smaller.) Hosts also note the possible presence of pets or a male roommate, though husbands and boyfriends often vacate, or hide, when the Quilters come over, the co-founders said.

They believe that women are more likely to develop lasting professional connections in a private home rather than in a club, a bar or a larger co-working space.

“We aren’t some kind of angry, feminist, kitschy, retro place,” Sumner, 29, said. “For us, it’s not about what’s cool, what’s hip. It’s for the everywoman who’s working on her own project, whether it’s a company or consulting or writing.”

Wurzl, 32, said: “Men are going to hockey games or golfing or whatever. Now we’re doing other things.”

The two women met two years ago when Sumner was overseeing membership for NeueHouse, a co-working club for men and women in Hollywood and New York, and Wurzl was working for One Roof, a meeting place for women with locations in Venice, California, and Melbourne, Australia. They bonded over such shared values as hating cilantro, and before long began wondering if together they might bring together creative women without committing to real estate.

“There’s an opportunity to decentralize this model where you have this massive overhead and you’re taking a risk on creating something cool,” Sumner said. And, “because they’re in a home, they tend to clean up after themselves,” she said of Quilt subscribers. “So that’s also brilliant.”

Burman, the graphic designer, could be found in a downtown Los Angeles loft the other morning with 11 other women, all toting laptops, some partaking of “brain tea” infused with ginkgo biloba.

Puno Lauren Puno, 33, the founder of the online marketplace I Love Creatives, was hosting the session, her first, and Sumner and Wurzl had come to make sure things were going smoothly.

At the head of the table, Wurzl, wearing an olive-green fedora, asked the assembled to introduce themselves by describing a professional risk they had taken recently.

“I’ve been looking into the cannabis industry, and it’s just fraught with risk,” Puno said.

“Mine is not a real risk,” began Lydia Mack, 32, the founder of Yes She Can, a website for female entrepreneurs. “It’s an ‘Ooh, I took a vacation, poor me’ kind of risk.” She went to Hawaii to visit her parents. “As somebody obsessed with productivity, it was scary.” Sumner instructed the group to grab Post-it notes and fill out “asks” and “tasks”: things they were in the market for, like feedback on a product, or an accountant, and things they wanted to get done during the session.

“Whether the project is 10 minutes or three hours, you go up, you take it down, you put another one up, and everyone gets to celebrate you,” Wurzl said. “It’s a great way to be accountable.”

The two developed this strategy after interviewing dozens of potential Quilters. “They had this nervousness that they’d just talk instead of working,” Sumner said.

After a few quiet minutes in which Puno contemplated playing the “Jeopardy” theme song, the women stuck their notes to the wall and read them out loud. Tasks ranged from the accomplishable to the never ending, sometimes on the same Post-it (“Write to-do list, start to X off to-do list”). The women dispersed throughout the loft and the air, devices notwithstanding, filled with the sound of polite chatter.

“I used to go to a WeWork, and I never talked to anyone,” said Brianna Duran, 31, who works in marketing. “Besides the free drinks, which you can only do so many times, really, there wasn’t much benefit.”

Anne Autio, a 26-year-old social media manager, said she had visited WeWork and Industrious, a local co-working space, “and I felt like I was constantly on display.”

By the second hour, Puno and Genevieve Fish, 27, the founder of the wellness website the Know Collective, were high-fiving over similar views on the definition of mental health (Fish: “It’s consistent self-care”) and the utility of the errand-outsourcing app TaskRabbit. Fish had recently hired Puno to design her site, but she still paid to attend the Quilt session. “I’ve been working at home for 18 months,” Fish said.

Quilt has raised $1 million from investors, its founders said. The Wing, by comparison, recently raised $32 million. But unlike a club occupying prime plots of land, Quilt has very little overhead and minimal barriers to entry. “There are plenty of women in Starbucks who would be happy to pay $20 a day to be around others like them,” said Sarah Harden, the president of Otter Media and an investor in Quilt.

A few hours after the co-working session ended, Sumner and Wurzl traveled to the home of Christina Topacio, the 30-year-old founder of Track, an accelerator for women who want to start a company, in central Los Angeles.

Sumner and Topacio were headlining a session about investment and vulnerability, and between the Quilters and Topacio’s vast network of female creatives, there weren’t enough seats to go around. By the door, a Quilt employee instructed arrivals to mind the excited barking dog and describe their current state of being on a name tag: “on the brink,” “stoked,” “optimistic,” “inspired.”

“I’m a junkie for anything involving women getting together,” Kristel David, the founder of the women’s website Wife Complex, said by a makeshift wine bar. Her name tag: “anxious.”

After the room took three collective breaths, Sumner and Topacio discussed learning to be a leader, how to ask for funding, and the balance between corporate stoicism and freewheeling emotion. Sumner asked how many people had cried that week; everyone raised their hand. “Last night, I ate a Sour Patch Kid and thought, ‘Oh my God, I can’t be a health coach!'” a woman in a chunky gray sweater said.

As Wurzl had in the morning, Sumner invited attendees to describe a professional risk. Kathleen Mahoney, 57, talked about leaving her hometown and boyfriend 29 years ago, moving across the country and starting a music festival. “I had no idea what a business plan was,” she said.

Now a real estate investor, she is considering opening a community hub in Los Angeles, which prompted her to check out Quilt. “It has this very earthy, hippie kind of vibe that goes back to when I was a kid,” Mahoney said. “I haven’t seen it in years. There’s something really organic and natural that happens to women when they congregate inside of the home.”