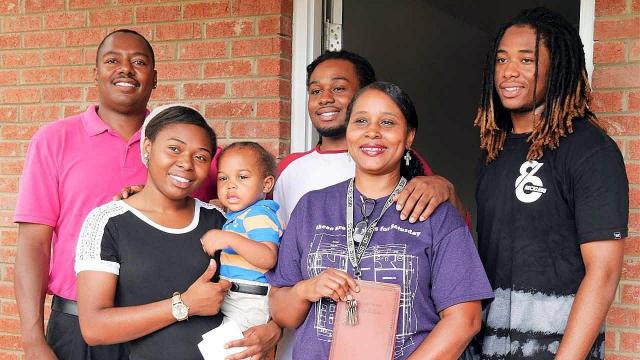 Monroe, N.C. — As Mark Conrad basks in the joy of moving his family into a new Habitat for Humanity home in Monroe, he also gets a perk that may be unique: a dramatically shortened commute to his job.

The Conrad family's handsome brick house sits in a neighborhood of well-kept homes in Monroe, a thriving exurb of Charlotte – the population grew from 26,000 in 2000 to an estimated 34,000 in 2014. In keeping with the city of Monroe's requirement that new houses be comparable to existing homes in a neighborhood, the Conrad family's home is relatively large for a Habitat house; four bedrooms and 1,550 square feet.

One of those bedrooms will be set apart for Mark Conrad's business: Heaven's Technique barber shop. It has a vinyl floor for easy sweeping and hookups for a sink. There will soon be a barber's chair, and customers will enter via a door leading directly to the outside.

One thing it will not have is the traditional barber pole, or even a sign; Conrad wants to retain the residential character of his new neighborhood. And besides, his customers know where to find him.

"I thank the Lord for this blessing," Conrad told the crowd that had gathered in late June for the dedication. "I thank Habitat for this blessing. Thank you for working with my family and providing us with a lovely home."

The Conrad home is the 47th built in Monroe by the Union-Anson County Habitat for Humanity affiliate. It's also the 143rd house the affiliate has built in its service area: Anson, Union counties and Chesterfield County, S.C.

"That's something we're very proud of," Greg Brinkley, the affiliate board president, told the dedication crowd.

The Conrad home is part of the ambitious Mountains-to-the-Sea Challenge, which is building a Habitat home in each of North Carolina's 100 counties. The SECU Foundation has put up $10 million to fund the project. Once a Challenge home is completed and the client family assumes a no-interest mortgage with SECU, the money is returned to the affiliate so that another Habitat home can be built.

Charles Perry, an SECU board member from the Monroe branch, said that the Challenge "embraces the spirit of SECU members," with each giving their $1 per month account maintenance fee for "the cooperative spirit of SECU: People helping people."

Monroe Mayor Bobby Kilgore told the crowd that the Conrads' home was the result of much hard work by many people.

"It's all about giving back and helping these folks get a home."

The city of Monroe also helped by waiving sewer and water hookup fees, which saved the Habitat affiliate thousands of dollars.

Construction manager Troy Pruitt noted that the brick exterior "increases the value of the home immensely" because it's more durable and more energy efficient. The brick - and enough for more than 30 other houses - was donated to the affiliate by Triangle Brick.

The windows, provided at a "huge discount" by Windsor Windows, are 50 percent more efficient than standard windows, Pruitt said. Grant money obtained through the city paid for a more efficient water heater and heat pump.

"This is a very well-constructed, durable and energy-efficient home, Pruitt said.

All of the planning, hard work and generosity was summed up in a few heartfelt words from Jamie Conrad.

"I want to thank all of the churches, families, and volunteers who made this a wonderful and beautiful place. Habitat, any time you need my help ... It really fills my heart, seeing the work from the ground up. Troy was working on two other homes when he was working on ours. I thank God and thank God for all of you." 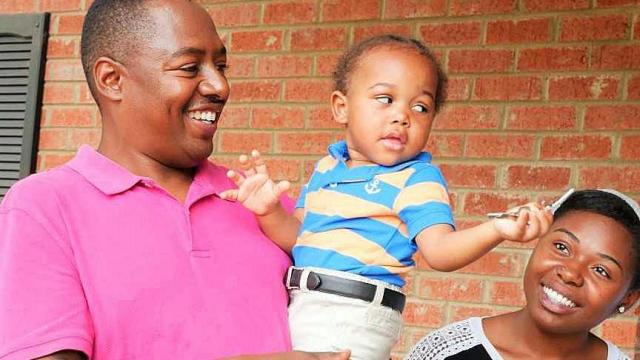 But Union-Anson County Habitat for Humanity isn't sitting on its laurels.

"We're halfway through the year and this is house number six."