Durham, N.C. — Durham police identified the woman and man who died in a shooting outside a health clinic Monday as Victoria Amanda St. Hillaire, 28, and Lequintin Ford, 33. They said it appears Ford shot St. Hillaire, then himself.

The UNC Family Medicine Center off Durham-Chapel Hill Boulevard will be closed all week after the incident.

St. Hillaire was an employee of UNC Family Medicine, at 3708 Mayfair St. The shooting took place in the parking lot of the building just before 8 a.m., around the time that the offices — for family medicine and sports medicine — opened for the day. 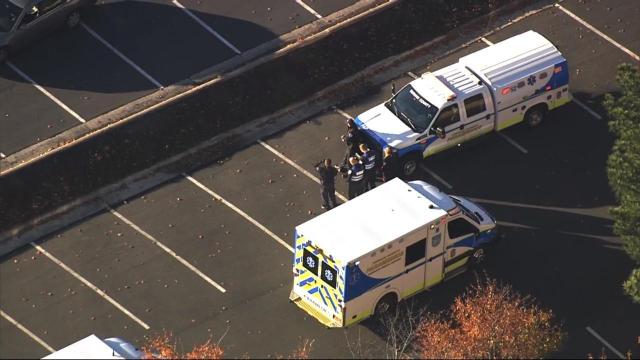 Sky 5 video showed police tape stretched across the parking lot around the building and two bodies on the ground. By 9:30 a.m., police said the scene was secure and they were not searching for a shooting suspect.

Construction crews working nearby told WRAL News the gunshots came from the parking lot, but Durham police did not confirm that information.

"I thought it was firecrackers, because they sounded very quiet," a witness told WRAL News. "But I did hear like 5, maybe 6, gunshots."

Police said anywhere between 25 and 35 patients and staff were inside at the time of the shooting.

At 9 a.m., the office was on lockdown, and ground video showed employees sitting in the parking lot.

Employees were visibly emotional, crying and hugging, as police moved them over to a staging area next door to the clinic.

Officials said the clinic would be closed Monday, Tuesday and Wednesday. It was already scheduled to close Thursday and Friday for Thanksgiving.

Ford was convicted of assaulting a woman in 2011.

He was scheduled to appear in court in January for numerous charges, including felony stalking, violating a domestic violence protective order and harassing an individual by phone, court records show.

The shooting is one of several to have occurred in Durham in less than 24 hours. A man was shot and killed outside an apartment at McDougald Terrace around 1:15 p.m. on Sunday, and two others were shot Sunday night while sitting inside a car.