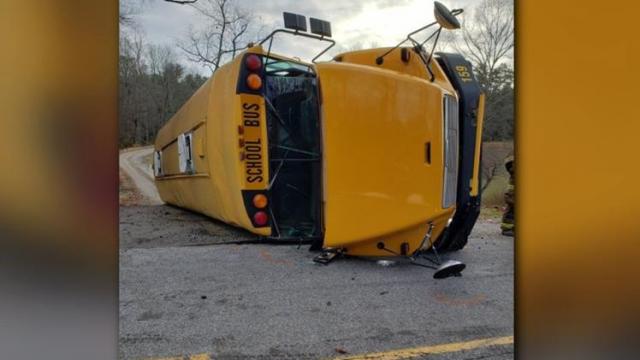 Hickory, N.C. — A woman is facing charges after her car crashed into an oncoming school bus Monday morning, injuring over a dozen students who were on their way to school when the bus left the roadway and overturned in Alexander County, authorities said.

Kimberly Ann Austin, 56, of Taylorsville, has been charged with driving while impaired and driving left of center, State Patrol Trooper Jeffrey Swagger said in an email statement to WRAL News. Austin was rushed to Frye Regional Medical Center for treatment, but her condition was not immediately released.

According to the North Carolina Highway Patrol, emergency crews responded to a crash on Icard Ridge Road near Bulldog Lane around 7:30 a.m. The crash happened near West Alexander Middle School near the Bethlehem community.

Authorities said a bus driver and 19 children were on board when the crash happened.

According to the statement, one person was listed in critical condition while 12 of the injuries were categorized as minor.

Six children from the bus were not injured and taken to the school after the wreck, police said.

Austin was ordered to provide a blood sample, the results of which will be reviewed by prosecutors to determine if more charges are warranted, according to the police statement.