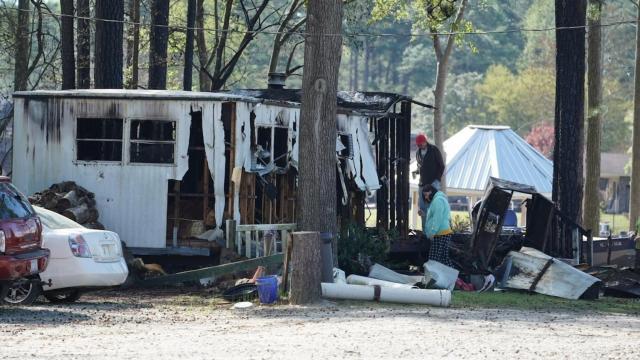 Fayetteville, N.C. — A woman and a cat died Saturday morning in a fire that destroyed a mobile home in Cumberland County.

The cat died after alerting a second woman, who escaped, of the emergency, according to Stoney Point Fire Chief Freddy Johnson.

The fire occurred around 3:30 a.m. in a single-wide trailer at 2561 Lakeview Drive. When firefighters searched the home, they found the body of 53-year-old Donna Leslie Parker near the back door, Johnson said.

A second woman inside the home, 26-year-old Dawn Tiffany Jarrett, was awakened by the family cat and got outside in time. Jarrett tried to get Parker out of the house but could not wake her before conditions deteriorated and she was forced outside.

Jarrett was treated for smoke inhalation on scene, officials said.

When the fire was out, family members sorted through what was left of the old single-wide trailer.

A neighbor said the woman was the sister-in-law of the man who owns the property. It was unclear how the two women knew each other.

The mobile home sat near a dried up pond known as "Upchurches Pond" by locals.

The cause of the fire is under investigation. An autopsy will performed on Parker's body.