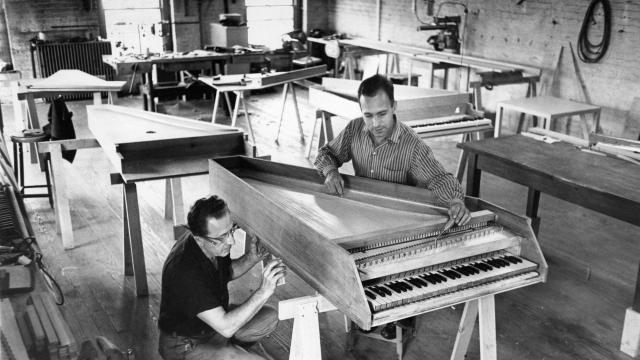 As the 1950s were ending, Wolfgang Zuckermann, a piano technician and self-taught harpsichord builder, found himself so busy making service calls from his West Village workshop to adjust his customers’ harpsichords that he had little time for anything else.

“Realizing that most people approach a harpsichord with caution, the way they do a vicious dog,” Zuckermann wrote in his book “The Modern Harpsichord” (1969), “I decided that the only way they might lose their fear of harpsichord maintenance was to go through the process of building the instrument for themselves.”

His ingenious and influential solution was a low-cost do-it-yourself harpsichord kit, widely referred to as the Z-Box: a 35-pound box containing a keyboard, strings, plectrums (or pluckers), jacks (plectrum-holders) and tuning pins, but not the wood for the cabinet. Customers had to visit a lumber yard for that.

Thousands of people around the world — high school students, retirees, Broadway actors, Wall Street lawyers, nuns, organists, doctors — bought Zuckermann’s kits, allowing them to play music written for the harpsichord the way it was meant to be played.

“A prison warden once wrote us that a convict had made a harpsichord while serving time for murder,” Zuckermann once recounted.

Zuckermann’s kits placed him in the middle of the postwar renaissance of the harpsichord, the quintessential Baroque keyboard instrument, which was widely used in Europe for hundreds of years until it was gradually replaced by the piano in the 18th century.

“Wolfgang Zuckermann was for the harpsichord a little like Charles Lindbergh was for aviation,” Marc Ducornet, a renowned French harpsichord maker who knew and worked with Zuckermann, said in an email.

His death was confirmed by Eric Britton, a friend since 1959.

Zuckermann began his career as a piano mechanic and tuner in Manhattan in the 1950s. A short and wiry man, he also played cello in Baroque groups and started looking to buy a harpsichord. But they were expensive and rare, so he set out to make one, using the specifications of both historical and modern models, and finished his first one in 1955.

He understood the singular sound of the instrument and how to re-create it inexpensively.

“To the educated ear, music composed for the plucked strings of the harpsichord doesn’t sound quite right on the hammered strings of the piano,” he said in an interview with The New York Times in 1958.

Sales were steady until 1958, when an electrical fire at his workshop on West 14th Street destroyed all five of his completed harpsichords. From the ashes he salvaged his piano tools and his wife’s Italian-made bicycle.

News of the fire raised his profile — there were, after all, not many harpsichord makers at the time — and business started to boom after he resumed work in a loft on nearby Clarkson Street, where he devised the kit.

In the late 1960s, barely a decade into production, Zuckermann sold his company to David Jacques Way, who had received a Z-Box years earlier as a birthday gift. After Way’s death in 1994, the company, now called Zuckermann Harpsichords, was sold to Richard Auber. The popularity of Zuckermann’s harpsichord kits led other companies to follow him into the field. Today, little of his former company’s thriving business is connected to the kits. Instead, it makes harpsichords.

“He put these harpsichords out all over the world and created interest by church choirs, concert series at synagogues, and endless groups that formed with the harpsichord at its center,” Auber said in a telephone interview. “You can’t do anything in early music without it.”

Wolfgang Joachim Zuckermann (named for Wolfgang Amadeus Mozart and Johann Wolfgang Goethe) was born on Oct. 11, 1922, in Berlin. His father, Aron, owned a metal and leather factory, and his mother, Gittel (Hutschnecker) Zuckermann, was a singer.

“We did more quarreling than playing since we were all essentially at different stages of development,” Zuckermann said in a 1968 article for Harpsichord magazine. “I was industrious but not gifted.”

The Zuckermanns, who were Jewish, fled Nazi Germany in 1938 and settled in Manhattan, where Aron Zuckermann opened a leather goods factory. Wolfgang changed his given name to Wallace, and was known to some as Wally; fought with the 10th Armored Division in France and Germany during World War II; and graduated from Queens College, where he studied English and psychology.

He worked for a while as a child psychologist but abandoned the field to study piano mechanics at a trade school, believing it was easier to fix a musical instrument than the problems of a child.

“Wolfgang operated on the serendipity principle,” Britton said. “Through a series of accidents having to do with piano tuning and repair, someone asked him to repair a harpsichord.”

By the time Zuckermann sold his company, he had grown disenchanted with living in the United States. He protested the Vietnam War and detested paying taxes to fund its escalation. He had been arrested in 1968, when he was a partner in Caffe Cino, an off-off-Broadway theater in the West Village, for staging a play where a character uttered an obscenity at a performance at which the audience included a child.

“When I was busted,” he wrote in a letter to The Village Voice in 1971, “and carted off to the Tombs without bail or a phone call, I saw the most frightening face of America.”

In 1969 he moved to Devon, England, where he bought a 15th-century manor house and continued for a while to work on harpsichords. He later wrote papers for EcoPlan International, Britton’s consulting firm, about environmental and public policy issues, and a book, “End of the Road” (1991), about the problems caused by over-dependence on automobiles. He also collaborated with illustrator Roger Tweedt on a book, “Family Mouse Behind the Wheel” (1992), which he wrote to raise children’s awareness of environmental issues.

Soon after moving to Avignon in 1994, he opened Shakespeare Books, which he stocked with English-language books that reflected his interests in politics, culture and history.

“He would sit there, read The Herald Tribune, drink a cup of coffee, eat a scone, meet a girl for lunch, then go back to work,” Britton said.

If one of Zuckermann’s motivations in creating the harpsichord kits was to curtail service calls, another was to introduce people to the inner workings of an instrument he found fascinating.

“Why not educate at least a tiny portion of the population to the beauty of the machine — something in which all parts moved in just the right relationship to produce the desired results?” he wrote in the 1968 in Harpsichord magazine article.

If people understood their machines, he said, — be they computers, typewriters or harpsichords — “they would not stand in awe of them.”