Cedar Grove, N.C. — Orange County Animal Services warned the public Monday about dogs on the loose that could be a cross between wolves and German shepherds.

The dogs escaped from their enclosure in the Cedar Grove area of Orange County about a week ago, and while eight were safely captured, four others remain loose. Officials said they haven't confirmed that all of the dogs are wolf hybrids.

There have been no reports of the dogs attacking or hurting any people, animals or livestock. But, officials noted, the dogs may display aggressive tendencies when confronted by people.

"These hybrids tend to be a little bit larger than a typical dog, and they may be more unpredictable because they are bred with wolf," said Dr. Tara Harrison, an associate professor at North Carolina State University's College of Veterinary Medicine.

"Feral dogs in general, particularly larger dogs, can certainly be very concerning," Harrison said. "I suspect, if they’re all from the same place, they’re probably going to stay near each other. Packs can be more dangerous just because they’re all helping each other."

It is not uncommon for people to purchase these kinds of pups as pets, sometimes, for thousands of dollars. 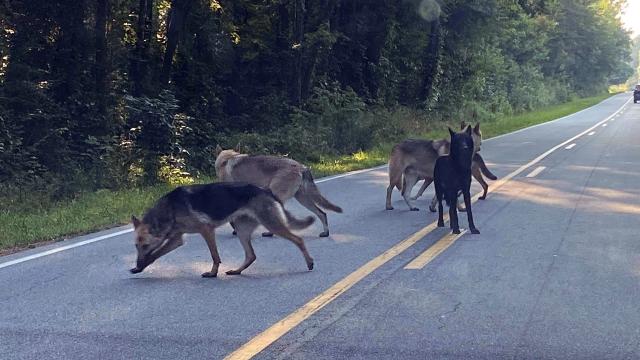 Charles Dysart, a breeder from North Carolina, said that he has never seen any of these kinds of dogs have behavioral issues. People should not be concerned that these animals are loose, he said.

"Wolves are very submissive," he said. "They’re not confrontational with humans. That’s the only way they’ve survived in the wild, is staying away from humans."

Owning a wolf in North Carolina is prohibited, Harrison said, but anything less than 100 percent wolf is allowed as a pet, although every county has its own rules. Wake County does not allow these kinds of animals, Raleigh has no rule banning them, and Cary allows ownership of a wolf-hybrid as long as the government is notified.

The rest of the counties in the viewing area do not allow ownership of these pups.

Orange County, where those dogs are on the run from, does not allow ownership. The owner could potentially face criminal charges and fines.

Two people who know the dog owner spoke with WRAL News anonymously. They both said that the dogs were not aggressive, but loving and kind.

The reason the dogs got loose, one woman said, was because their owner's health was deteriorating. He was not able to keep them in a secure enclosure or run after them.

The woman said that she has known the puppies since they were born, and has never had any problems with them.

The owner had one male dog, she said, and then he also got a female German Shepherd. The owner thought the shepherd was spayed, but she was not. After that, he had 10 pups.

"39 I just want people to know that these dogs are not going to harm them," she said. "They’re not going to hurt them. Now, don’t go up to the dogs. Let them be trapped."

Nancy Brown, founder of Full Moon Farm, has experience with these kinds of wolf-dogs. She said they are portrayed as scarier than they really are.

She says these pups would not harm a person if provoked. But social media posts say that the pack has been aggressive.

Animal control officers have set traps in the Cedar Grove area, and officials urged people to call Orange County Animal Control at 919-942-7387 if they spot the dogs and not to try to feed, capture or confine them.

Harrison said a rabies vaccine exists for hybrid dogs, but there's no proof it works for this particular mix.