'I still can't believe this' 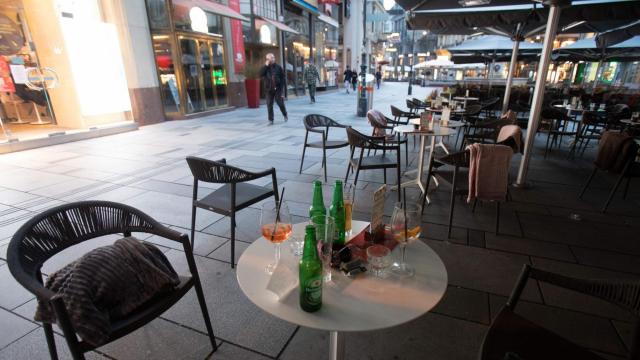 CNN — Vienna, Austria (CNN) -- Rabbi Schlomo Hofmeister watched in horror as a gunman weaved in and out of bars and pubs in central Vienna, shooting at people enjoying a last night of fun before Austria's nationwide coronavirus curfew came into effect.

"He was working like a professional, trained attacker," Hofmeister told CNN. "He looked professional, he didn't look confused and he wasn't shooting around randomly -- it was very targeted and coordinated, like a fighter."

Hofmeister witnessed the attack Monday evening at the busy Bermuda Triangle entertainment quarter, watching from his home near the Seitenstettengasse Temple, the synagogue where he gives religious instruction.

Hofmeister called the police and told them that a gunman was running towards people at a bar, shooting "dozens, maybe hundreds, of rounds."

Police in Vienna told CNN that it is still unclear if Monday night's shootings involved a lone gunman or two or more attackers. Authorities there advised parents to keep their children home from school on Tuesday, in case other assailants are on the loose.

An Austrian law enforcement source told journalists on Tuesday that authorities had identified six locations by a stretch of the Danube canal where shootings took place: the streets of Salzgries, Fleischmarkt, Bauernmarkt, Graben, Seitenstettengasse and Morzinplatz.

Jimmy Eroglu, a waiter at Cafe Theo, described how guests sitting at outside tables suddenly rushed into the restaurant as shots rang out.

"I ... went to look and asked: 'What's going on?' And they said there's a shooting, and then I heard for sure at least 15 or 20 shots," he said, smoking a cigarette Monday night to calm his nerves. He said he had locked the customers inside the cafe until police arrived.

"I still can't believe this. At the beginning I thought I was somewhere in the US," he said. "This is something we only see in America, or in Iraq or Afghanistan, but not here in Austria."

Eroglu, a Turkish Muslim who migrated to Austria when he was four years old, said he wanted to send a message to the world that the attacker did not represent Islam: "Islam isn't bad. Islam doesn't tell us to kill anyone — it's the opposite," he said.

Werner Beninger was having dinner with his wife nearby when he heard a series of shots ring out. He told CNN he initially thought the noises were fireworks. "The shots came closer and then I realized that it was a volley of shots."

"People fled into the garden of the restaurant, many were nervous," he said. "Then [special police unit] WEGA came and told us to go to the basement, and there were roughly 50 people, and we waited it out in the basement."

Beninger said they stayed there until after 1 a.m., when police finally gave them the all-clear to leave the scene.

The bloody attack, in which at least four people were killed and more than 20 injured, took place in the city's historic first district, an area known for its art nouveau architecture and narrow cobblestone streets lined with fashion boutiques.

The area was busy on Monday night, as friends met for a final drink before Vienna -- like the rest of Austria -- went into coronavirus lockdown on Tuesday. Unseasonal warmth had also attracted crowds of people to the area, many sitting outside in thin jackets.

Robert Schneider, 39, told CNN he was heading towards the area from his home in the city when he noticed a laser pointing at his chest -- he believes it was likely from a weapon belonging to police officers called to the area in response to the attack.

"I was just going to have a meal with friends" he said on Monday night. "All we wanted to do have a meal and some drinks and enjoy the evening. Now we need to have a drink to calm down."