Without backing of or reproach from colleagues, NC senator insists Trump won

The senator's Republican colleagues are largely silent about his repeated insistences, which are based on a deep belief in shifting and unsubstantiated conspiracies. In past conversations, Steinburg has said China, the CIA, the FBI and potentially a blackmail campaign against U.S. Supreme Court Chief Justice John Roberts are or may be involved in a long-planned coup that culminated in the November elections.

WRAL News reached out via email Thursday morning to the other 27 Republicans in the state Senate, seeking to determine how widespread these beliefs may be. None responded beyond a statement from Senate President Pro Tem Phil Berger's office, which speaks for leadership.

"Sen. Steinburg is an elected member of the North Carolina legislature and can and does speak his mind," spokesman Pat Ryan said in an email. "We are not in the business of policing the speech of other members, who are responsible only to the voters who elected them."

And who won the 2020 presidential election?

“The Trump campaign exhausted all legal avenues to press its claims regarding the election," Ryan said. "The evidence produced in court did not meet the standard necessary for something as serious as changing the outcome of a presidential election. Joe Biden is president, and hopefully he does a good job.”

When emails to rank-and-file Republican senators didn't elicit responses, WRAL called seven directly. One took the call, none returned messages. Sen. Warren Daniel, R-Burke, said the election is over and "we need to move on."

"As far as I know, everybody in America can still have their own opinion," Daniel said, "and Sen. Steinburg can have his.”

Pressed on whether he sides with Steinburg at all that this election was stolen – a core falsehood that led to a "Stop the Steal" rally in Washington, D.C., earlier this month that culminated in a fatal attack on the U.S. Capitol – Daniel replied, "I’m a lawyer, and I’d like to see evidence before I take a position on an issue.”

Steinburg, in a video posted to his personal Facebook page on Inauguration Day, conceded that Biden is the president. He focused largely on the way forward, calling on Republican legislatures around the country, including in North Carolina, to tighten election rules.

He opened like this: "I, like many of you, probably 75 million or more of you, who do not believe that Joe Biden actually was elected.” 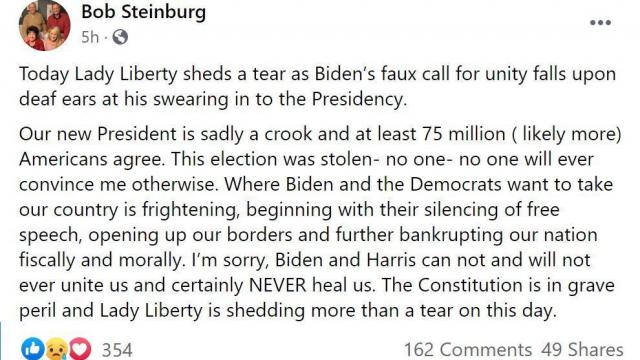 Earlier in the day he’d written that Lady Liberty was shedding a tear.

“This election was stolen – no one – no one will ever convince me otherwise," he wrote.

Steinburg was re-elected in November to a two-year term by about a 10-point spread. He represents much of coastal North Carolina. Told via text this story was forthcoming, the senator said it "doesn't really matter what anyone else thinks."

"This is what I think, and if I'm not mistaken, I believe free speech and having an opinion are still 'technically' legal in America," he wrote. "But for how much longer with the new regime is anyone's guess."