With Trump in the White House, the Family Business Takes It Down a Notch 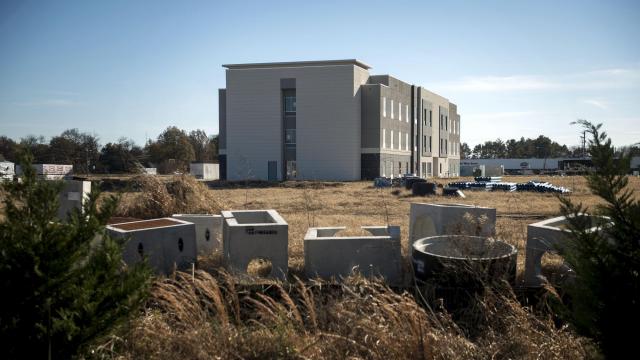 It does not look like much, but the unfinished development in this small Mississippi Delta town stands as the only major new deal by the Trump family business since President Donald Trump took office in January.

When the president turned over daily operations of the Trump Organization to his eldest sons, Eric and Donald Jr., they spoke excitedly about picking up where their father left off.

But the crawl toward completing the hotel reflects how difficult it has been for the company to expand its footprint with Trump in the White House. The Trump Organization has taken on a distinctly un-Trumplike feel this year: Its ambition for new development is subdued, and the signature showmanship for announcing deals is largely absent.

Six months before his election, Trump told The New York Times that his business had about 120 deals in the works worldwide. The company had just undergone a decade of significant growth, opening five-star hotels in Chicago, Las Vegas and Washington, and snatching up golf courses across the country. It had also signed marketing deals that attached the Trump name to luxury towers in global destinations like Istanbul, Manila and Panama City.

Today, the pipeline of potential deals sits at about 30, all in the United States, according to the company.

In an interview, Eric Trump said the company decided to focus primarily on its existing properties, which consist of 16 golf courses, a winery, seven stand-alone hotels and a portfolio of commercial real estate properties.

As a private, family-run business, the Trump Organization need not answer to shareholders, he said, so it had the freedom to slow new development. That also means the company does not have to disclose how well, or not well, it is performing financially, nor are the identities of partners in the pipeline publicly known.

“We have the best properties in the world; they’re doing extraordinarily well,” he said, without providing details on the company’s financial performance. “And if we have to take a break for an eight-year period of time or a four-year period, then it is what it is.”

Eric Trump said his father’s presidency had complicated the company’s ability to start new deals. The company pledged not to pursue new foreign ventures, and it is vetting potential domestic deals to avoid controversy, retaining Bobby Burchfield, a Washington lawyer, to protect the Trumps from doing business with partners that might have conflicts of interest or checkered pasts.

Eric Trump, who has effectively assumed the role as the leading executive at the company, is also a much more cautious businessman than his father, people who work with the Trumps say.

“Donald is very aggressive, and Donald pushed it while he was active — and they don’t have Donald now,” said Phil Ruffin, a billionaire casino owner who partnered with the Trumps on the Trump International Hotel Las Vegas. “The boys are doing as well as anybody could. I haven’t seen any difference, except they’re not really doing anything new.”

The difference in management styles partly reflects Eric Trump’s sensitivity to criticism of the company now that his father is in the White House. There is also the criminal investigation by special counsel Robert Mueller III, who may ultimately scrutinize aspects of the family business before he finishes his inquiry.

Since the sons took control of the company, the biggest new initiative has been the rollout of two domestic hotel brands, Scion Hotels and Resorts, a four-star line, and American Idea Hotels, a budget-friendly chain. The company recently posted websites for both chains.

But the Trumps have announced only one Scion business partner, the developers of the hotel here in Cleveland, a city of 12,000 about a two-hour drive from Memphis. The Trumps and their partners have delayed the project as they revised the construction plans.

This week, the partners applied for a new permit at Cleveland’s community development office, an indication that they were close to getting started again, said Brett Moorman, the co-director of the office, who has been fielding questions from the community about the status of the project. “Everywhere I go, whether in church or in public, someone says, ‘What’s going on with that hotel over there?’ I say, ‘Your guess is as good as mine,'” Moorman said in an interview at his office last week.

In a statement, the Trumps’ partner, Chawla Hotels, said construction “should recommence after the holidays” and were expecting the hotel to open in 2018.

Cleveland’s downtown strip is on a street called Cotton Row, named for the crops on nearby farms. The town is home to Delta State University and the recently opened Grammy Museum Mississippi, which showcases musical history and the deep local roots of the blues.

Local officials said they were eager to see the project finished to provide hotel rooms for visitors to these attractions.

“We were looking forward to the doors opening up in 2017,” said Willie Simmons, a Democrat and Mississippi state senator who owns a local soul food restaurant, the Senator’s Place.

While the Delta has cultural richness, it is among the poorest regions in the United States — a federal judge last year ordered the town, which has a large African-American population, to desegregate its high schools and middle schools. The Scion in Cleveland is being built across the street from a strip mall and within walking distance of a Dollar General discount store, making it an unusual new market for the Trump Organization, which is known for luxury accommodations in major cities.

While Mississippi overwhelmingly favored Trump in last year’s presidential election, the Delta leans Democratic. But politics has not been a major issue with the new hotel. Jay Burchfield, a self-described moderate, who owns the Lennys Subs franchise across the street from the future Scion, said the hotel was needed.

“I don’t care whether it is Democrat or Republican — it is a hotel,” he said.

In June, the Trumps announced the partnership with Chawla Hotels, which is run by the brothers Suresh and Dinesh Chawla, who own 17 hotels in the Mississippi Delta, including Comfort Inns and Hampton Inns. In addition to the Scion hotel in Cleveland, the Chawlas plan to convert three of their hotels into the first American Idea properties, but little has been said publicly about those plans, and the Chawlas declined to give an estimated completion date. Their late father, V.K., an Indian immigrant, had received advice from Donald Trump decades ago, which helped jump-start the family business. During the presidential campaign, Suresh Chawla wrote a letter that appeared in several local newspapers about his father’s experience, which triggered a series of encounters with the Trumps that culminated with the Chawlas going into business with them.

The Chawlas were already building what was originally to be named the Lyric Hotel and Spa, the anchor of a real estate development, which included restaurants and entertainment space, called the West End District. They originally planned to open the Lyric this fall.

With the Trump deal, the project took on the name Scion West End. The Chawlas said they spent the past few months working with the Trump Organization to rework the design plans, including relocating the lobby to another building on the property that has not yet been built. (They are planning a total of nine buildings.)

The Chawlas, who are financing the reported $20 million project through a bank loan, would pay licensing and management fees to the Trumps. The Chawlas say “final costs are still being evaluated.”

“It has been a fascinating experience,” the Chawlas said in response to written questions. The Trump Organization, they said, “is incredibly adept at taking ideas and helping us expand our knowledge base. The team has expertise in every area imaginable that a developer would want to tap into.”

The deal with the Chawlas cleared the Trump Organization’s vetting process, but other deals have had more trouble.

Bobby Burchfield, the Washington lawyer who serves as the company’s outside ethics adviser, scrutinizes the Trumps’ potential hotel partners, as well as transactions that involve a government agency and certain other business arrangements worth more than $2.5 million, among other things. In large part, his task is to verify that the terms are at market rate and that potential partners, and their sources of financing, are appropriate. Burchfield has said he will not approve deals that will otherwise “embarrass or diminish” the office of the presidency.

Burchfield, who represented George W. Bush in the 2000 Florida recount and was head of ethics for President George H.W. Bush’s re-election campaign, raised concerns about a potential Scion deal in Dallas after it was revealed that a prospective business partner had ties to Russia and Kazakhstan, according to two people briefed on the process who were not authorized to discuss the private deliberations. The Trump Organization cut off negotiations with that potential partner in April.

Since then, Burchfield has raised questions about other potential deals, the people said. Those questions prompted the Trump Organization to delay or pull back from transactions.

The Trumps have also been cautious about sending potential deals to Burchfield until all of the lenders and investors are lined up, the people briefed on the matter said. The same caution has put off public announcements of possible deals.

“Making sure every ‘i’ is dotted and every ‘t’ is crossed and everything is perfect — does that kill deals? One hundred percent,” Eric Trump said. “Is it the right thing to do when your father is commander in chief, 100 percent it is. Will we have to do it the day he is out of office? No we won’t.”

The Trump Organization pledged before Trump’s inauguration that it would not negotiate new overseas deals during his presidency, but it has proceeded with previously negotiated licensed developments in India, Indonesia, the Philippines, Dubai and elsewhere, projects that Eric Trump noted are of a much bigger scale than the Mississippi hotel. Major work is underway on an almost-completed tower near Manila, Philippines; a second golf course in Dubai, United Arab Emirates; Trump Tower in Punta Del Este, Uruguay; and residential towers in Mumbai and Kolkata, India. Other overseas projects are not moving as quickly. The company announced in 2015 that it would move ahead with the Lido resort project in Indonesia that would include a golf course, country club and luxury condominiums. A second project was scheduled for Bali, an Indonesia resort island. But only the Lido golf course is under construction.

In the United States, some hotel properties have soared since the election. The Trump International Hotel in Washington, a magnet for Republican officials and lobbyists, turned a nearly $2 million profit in the first four months of this year, records show. The company’s hotel in Las Vegas is also raking in money, Ruffin said.

Overall, the Trump Organization’s business portfolio brought in at least $597 million in revenue during his 2016 campaign and the first few months of his presidency, down about 3 percent from the prior period, according to the president’s most recent financial disclosure, released in June.

Trump SoHo, the company’s hotel in a trendy area of Lower Manhattan, struggled since the election, in part a reflection of the oversaturated hotel market in New York City as well as a move by some professional sports teams to stop using the hotel. After the Trump Organization negotiated a buyout fee, the Trump name was removed from the hotel Wednesday night and is under new management. It is now called the Dominick Hotel.

“Visit our brand-new flagship store,” the sign in the Trump Tower lobby says, “for Trump apparel, accessories and more!”