With Student Loan Borrowers, DeVos Would Rather Fight Than Forgive 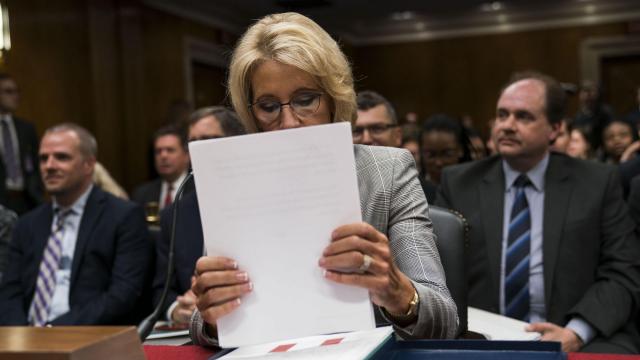 The students attended institutions with pragmatic names like the Minnesota School of Business and others whose branding evoked ivy-draped buildings and leafy quads, like Corinthian Colleges. Tens of thousands of them say they are alike in one respect: They were victims of fraud, left with useless degrees and crushing debts.

Now the government program meant to forgive the federal loans of cheated students has all but stopped functioning.

No Education Department employees are devoted full time to investigating borrowers’ complaints, according to three people familiar with the agency’s operations. Instead, the agency’s staff has fought in court to reduce the amount of relief granted to some students and to halt a rule change intended to speed other claims along.

That has left more than 100,000 claims for relief in limbo, according to the Education Department’s most recent data.

“It’s just dream-crushing,” said Meaghan Bauer, who owes $45,000 for her time at the New England Institute of Art. The for-profit school, in Brookline, Massachusetts, closed last year and was sued on fraud charges by the state attorney general in July.

“I can’t afford to go back to school,” Bauer, 27, said. “Will I ever be able to buy a house? Or get married? I spent so much time working on a useless degree, and it could ruin me financially for the rest of my life.”

The relief program, called borrower defense, became a popular way for students to seek debt forgiveness after several major for-profit schools went bust in recent years. During the Obama administration, the Education Department approved about 30,000 claims, more than half in the final two weeks before the new administration took over. All of those borrowers had their loans fully forgiven.

But President Donald Trump’s education secretary, Betsy DeVos, who before taking office invested in companies with ties to for-profit colleges and student-loan debt collectors, has derided the program as a “free money” giveaway and vowed to make changes. She has also appointed a former dean of DeVry University — a for-profit school that is the subject of about 10,000 fraud claims by former students — to oversee the unit that runs the program.

As of mid-2018, her department had approved only 16,000 claims, and Education Department officials confirmed that about 15,000 of those were granted partial forgiveness. Tens of thousands more still await a decision.

“There’s nothing in the regulations to stop the secretary from slow-walking the processing of claims,” said Clare McCann, a senior policy adviser at the department during the Obama administration. “I’m positive there will be more litigation from borrowers who have been sitting in the backlog.”

Under President Barack Obama, the Education Department approved claims involving three schools. In nearly two years, the Trump administration has not granted approvals to students from any additional schools, even failed institutions like the Minnesota School of Business, which shut down after a state court ruled that it had misled students and broken state fraud laws.

The department’s attempts to reduce the amount of forgiven debt and block a new forgiveness rule have drawn rebukes from federal judges.

A judge in California found that the department had illegally obtained data from the Social Security Administration on the earnings of former Corinthian Colleges students as it sought to offer some of them only partial loan relief. Last month, the judge granted class-action status to 110,000 former Corinthian students who have applied to have their loans forgiven and may have been granted partial relief.

Also last month, a federal judge in Washington told the department to institute a rule written by the Obama administration requiring a “clear, fair and transparent” process for handling borrowers’ loan discharge requests. The rule also orders the department to automatically forgive the loans of certain students who were enrolled when their schools closed or who withdrew shortly before then, without requiring borrowers to apply for that relief.

But even after that court victory, critics of the Education Department are skeptical that there will be much progress.

“This rule is only as good as the administration’s intent to implement it,” said Toby Merrill, director of Harvard Law School’s Project on Predatory Student Lending, which has represented dozens of borrowers in lawsuits against schools and the Education Department.

Liz Hill, an agency spokeswoman, said the Education Department would comply with the court’s decision and carry out the new rule “soon.” But she said DeVos considered the rule “bad policy” and intended to rewrite it.

Many applicants whose claims have lingered might not get much help from the new rule, anyway. The crux of it — establishing a federal standard for determining if a borrower was defrauded — applies only to loans made in 2017 and beyond. Borrowers with earlier loans must prove that their school broke a state law.

Borrowers have sought loan forgiveness after attending institutions large and small — from DeVry, which boasts on its site that it has awarded more than 300,000 degrees, to the Marinello Schools of Beauty, a defunct cosmetology chain the government said had committed student loan fraud. Julian Schmoke, the former DeVry dean who is the department’s enforcement chief, has recused himself from issues related to DeVry, a department spokesman said.

The program has forgiven nearly $535 million in debt, meaning the government absorbs the loss. That’s one reason DeVos has said the program should be overhauled.

“Students who have been defrauded and suffered harm should absolutely be made whole,” Hill said. “The department also has a duty to safeguard taxpayer dollars. It would be irresponsible to give 100 percent relief to every claimant without first assessing their claim and understanding whether or not harm was suffered.” The Education Department is the biggest lender to Americans who borrow for college, with more than $1 trillion going to 33 million students. In the fine print of its promissory notes, the agency spells out its terms: Borrowers must repay what they owe even if they drop out, are unhappy with their education or can’t find a job in the field they trained for.

But there’s one escape clause. If borrowers were significantly misled by their school, they can ask the government to forgive their loans. Just as a bank appraises a house before it issues a mortgage, the Education Department is supposed to ensure that the programs it effectively funds are legitimate.

The provision was mostly overlooked for decades. Between 1995 and 2015, the department received only five such claims, according to a report from the agency’s inspector general. But after the Obama administration and a group of state attorneys general cracked down on vocational schools that lured students in with false promises, several large chains collapsed.

Corinthian was the first. In May 2015, it went bankrupt and closed its campuses, leaving 350,000 recent students with job training they called subpar and credits that most other schools would not accept. An activist group, the Debt Collective, dusted off the borrower defense rule and mobilized thousands of former Corinthian students to file claims.

Unable to deal individually with so many cases, the Education Department hired a special master and began to develop a system for investigating and adjudicating claims. It also announced that many Corinthian students would qualify to have their debts erased.

“You’d have to be made of stone not to feel for these students,” Arne Duncan, then the education secretary, said in June 2015. “We will make this process as easy as possible for them.”

The complex work of evaluating the Corinthian claims has taken time. By January 2017, the department had approved nearly 32,000.

But when Obama’s administration ended, about 41,000 complaints still awaited review. The Education Department had granted relief for borrowers who met specific criteria at two other schools, ITT Educational Services and American Career Institute, but it had not delved into thousands of claims involving other institutions.

After Trump took office, the existing claims sat untouched for nearly a year as tens of thousands of new ones arrived, according to agency documents.

In December, DeVos’ department approved nearly 13,000 claims, mostly from Corinthian students, under the criteria established by the Obama administration — but to many, she granted only partial relief. Since then, the department has approved only 4,000 more applications.

Those approvals have barely put a dent in claims against ITT, one of the nation’s largest for-profit educational companies before it closed in September 2016, just before the start of a new school term.

In January 2017, just days before Trump’s inauguration, the department’s borrower defense unit circulated a 14-page memo recommending that the debts of some ITT students be fully forgiven. The value of the education the school provided them was “likely either negligible or nonexistent,” the investigators concluded.

On that recommendation, the department forgave the debts of 33 ITT students. It has not yet taken action on claims from 13,000 others, according to data sent to members of Congress.

Joseph White is among the ITT students who say they were cheated. He filed a claim with the Education Department three years ago and has heard little since.

White, 41, of St. Louis, graduated in 2008 with a bachelor’s degree in software engineering. But when he landed a position as a web developer, he quickly discovered that he lacked the skills to do his job.

Instead of teaching students to program computers, White said, instructors had handed out sheets of code and simply had the students retype them. At one final exam, the instructor stood at the front of the classroom and read the answer key aloud, he said.

To finance that degree, White took out loans totaling more than $80,000.