With Rubio, Corker Back on Board, GOP Speeds Ahead With Tax Plan 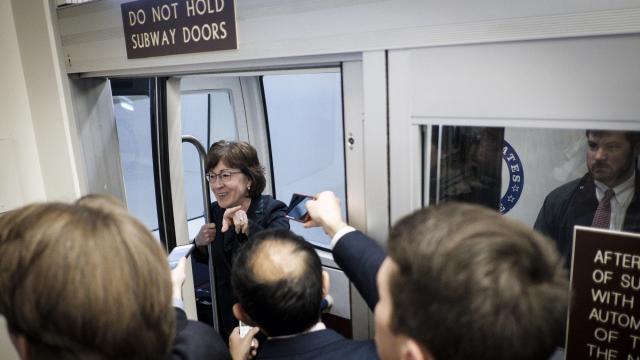 WASHINGTON — Republican leaders moved closer to a swift victory on their $1.5 trillion tax plan after one wavering senator, Marco Rubio, R-Fla., and one senator who voted no on the original Senate bill, Bob Corker, R-Tenn., threw their support behind the final bill.

The unexpected support from Corker, who had opposed the initial Senate legislation over concerns about its impact on the deficit, put the Republicans on the 1-yard line in the final seconds of the tax bill debate. Lawmakers plan to vote next week with the aim of getting a bill to President Donald Trump by Christmas.

On Friday, as details emerged about the final bill, it became clear that the agreement would provide slightly more generous tax breaks to low- and middle-income Americans by reducing some benefits for higher earners, one of several tweaks intended to solve the budget problems standing between the bill’s passage and President Donald Trump’s desk, according to people briefed on the final plan.

With the finish line to their first legislative victory in sight, Republican negotiators agreed to provide a more generous child tax credit in the final bill to shore up support from Rubio, who said he would not vote for the legislation unless it helped more lower-income Americans.

A spokeswoman for Rubio said the senator will vote yes on the legislation, given the changes that were made. The final bill will allow families who owe no federal income taxes to still claim up to $1,400 of the $2,000 child tax credit, up from $1,100 in the original version.

In a tweet Friday, Rubio called it “a solid step” and suggested he would now vote for the bill.

The move to satisfy Rubio appears to have been financed, at least in part, by reducing the ability of higher earners to take the $2,000 per child tax credit. The Senate bill lowers the income cap for families who could claim the credit by phasing out the benefits of the credit once families earn $400,000 a year, down from the $500,000 in the original Senate bill.

Corker, a longtime deficit hawk, said he was swayed to support the bill as the result of “many conversations over the past several days with individuals from both sides of the aisle across Tennessee and around the country.” Corker said the bill “is far from perfect, and left to my own accord, we would have reached bipartisan consensus on legislation that avoided any chance of adding to the deficit and far less would have been done on the individual side with items that do not generate economic growth.”

New details from the text, shared with The New York Times on Friday, reveal that lawmakers offset other last-minute changes to the bill — such as eliminating the corporate alternative minimum tax and lowering the top individual tax rate to 37 percent from 39.6 percent today — through slight adjustments, not sweeping changes. And it was still unclear how they were going to pay for the entire package, which can add no more than $1.5 trillion to the deficit if it is to pass without support from Democrats.

The bill’s text, which was signed by Republican negotiators from the chambers’ conference committee Friday, includes few major changes from the version that passed the Senate earlier this month. The 2025 expiration date for the individual tax cuts remains, as does the estate tax, which would apply to fewer Americans down the road. At the center of the $1.5 trillion bill are large tax cuts for corporations and other businesses, which Republican lawmakers say will create jobs, investment and economic growth.

Compared to the Senate bill, the revised legislation would lower some thresholds for entering a higher individual marginal tax bracket. For example, the top bracket for a married couple filing jointly would begin at $600,000 a year, down from $1 million in the Senate bill.

Owners of pass-through businesses, who pay taxes on their profits at the owner’s individual tax rate, would receive a slightly less generous tax break than the original bills called for, allowing a 20 percent deduction on profits they earn. That deduction would phase out — with some exceptions — starting at $315,000 of income for couples. The Senate bill included a larger deduction, 23 percent, and a higher phaseout point, $500,000 for couples.

Two newly revealed changes on the business side would help offset revenue losses: a provision that would allow corporations to deduct 80 percent of their net operating losses in the future, down from 90 percent in the Senate bill, and one that would effectively reduce the annual value of research and development tax breaks starting in 2022.

In changes revealed earlier this week, the bill would reduce the corporate tax rate to 21 percent from a high of 35 percent today; the Senate and House bills had lowered the rate to 20 percent. It also allows taxpayers to deduct up to $10,000 a year in state and local taxes — a mix of property taxes and either income or sales taxes paid — in a bid to blunt tax increases on higher-earning workers in high-tax states such as New York and California.

Republicans planned to release the bill’s text Friday afternoon and aim to vote on it next week. A late change intended to shore up Rubio’s support would allow 70 percent of the $2,000 per-child tax credit to be refundable, up from 55 percent in the original draft of the bill, according to lawmakers and those briefed on the change. The change would allow families with no tax liability to claim up to $1,400 in tax refunds per child, up from $1,100 in the version that passed the Senate earlier this month.

The change appears to be a victory for Rubio, who said Thursday he would not vote for the bill unless it included a more generous credit that would allow families without any federal tax liability to claim the credit for each child.

Rubio wanted to raise the amount that is refundable above 55 percent by what he calls a meaningful amount.

The bill appears to be heading toward the finish line but at least three other Republican senators remained publicly undecided Friday, including Mike Lee of Utah, who has allied with Rubio in pressing for an expanded child credit, and Sen. Jeff Flake of Arizona, who has been trying to extract commitments from Republican leadership related to the Deferred Action for Childhood Arrivals, or DACA, program. Sen. Susan Collins of Maine has also expressed reservations about the bill’s reduction in the top individual tax rate and pushed for party leaders to support measures to bolster individual health care markets as a condition for her vote.

Collins’ office said on Friday that she had not yet seen the final bill.

A spokesman said Flake was undecided on the final bill.

Lee, in a statement, sounded upbeat about the bill, saying Rubio and other senators “have done a tremendous job fighting for working families this week and they have secured a big win.” He added: “I look forward to reading the full text of the bill and, hopefully, supporting it.”

Trump, when asked about Lee and Rubio on Friday, said he had no concerns about their support.

Trump also told reporters he had seen the bill, and he liked it.

“I have seen it,” Trump said in brief remarks at the White House. “I think it’s going to do very, very well. I think that we are going to be in a position to pass something as early as next week, which will be monumental.”