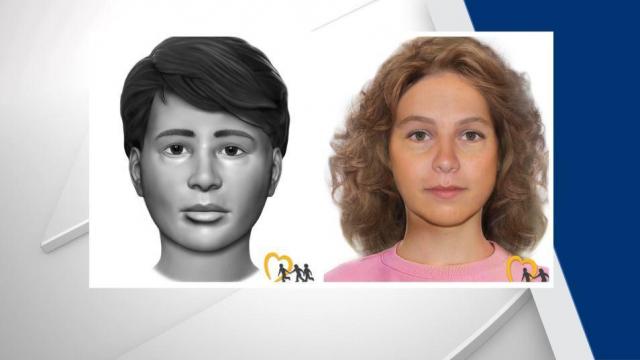 Hillsborough, N.C. — The Orange County Sheriff’s Office and the National Center for Missing and Exploited Children is asking for the public’s assistance to identify two sets of remains that were found in Orange County in 1990 and 1998 respectively.

Authorities hope new facial reconstructions for both “John Mebane Doe” and “Jane Hillsborough Doe” will help someone to recognize the children.

Anyone with information about the children, or anyone who believes they know who the victims are, should contact the National Center for Missing and Exploited Children at 1-800-843-5678 or the Orange County Sheriff’s Office at 919-644-3050.

On September 25, 1998, skeletal remains of an unidentified boy were found in Mebane. He was found in heavy brush near a billboard sign along Industrial Drive ,which is a service road adjacent to the westbound lanes of Interstate 85 and Interstate 40.

The child had been dead at this location for several months. The remains were identified as a male, 9 to 12 years old. His race is Caucasian or Hispanic. He stood approximately 4’11” tall and had straight brown hair. The child was found wearing khaki shorts, socks and black sneakers. A small amount of cash was found inside his pocket.

Testing revealed that the boy was likely not from North Carolina but from the southeast, with the highest potential from Alabama and Georgia.

On September 19, 1990, remains of an unidentified female were found along the eastbound lanes of Interstate 40 in Hillsborough. Her body was found over the guardrail, east of the New Hope Church exit. The female had been dead at this location for approximately 4 to 6 days.

The female is Caucasian and was 14 to 22 years old at the time of her death. She stood 5’3” tall and weighed approximately 108 pounds. She had brown or blonde hair that was possibly color treated and cut just above her shoulders. She had a 3-inch surgical scar on her lower right side of her abdomen that was consistent with an appendix scar.

The girl was found wearing an oversized pink sweatshirt with three cartoon bunnies on the front, a bra and ankle socks. She was also found wearing a thin yellow metal ring on her left ring finger that appeared to be homemade and a thin twisted metal bracelet on her left wrist.

Both images were created by Forensic Artists at NCMEC.