With court rulings clarifying NC mail voting rules, how to make sure your ballot counts 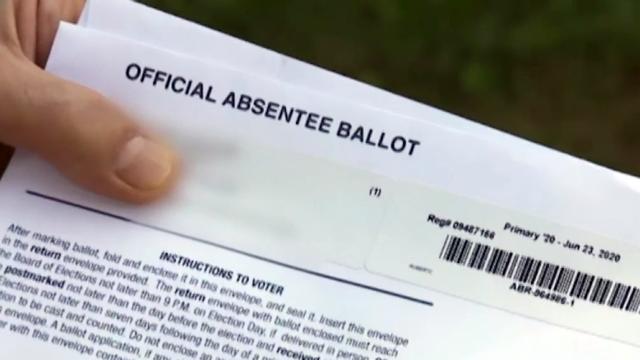 Raleigh, N.C. — After months of legislative and legal fights over the rules for absentee-by-mail voting, North Carolina finally has some clarity two weeks before Election Day.

On Monday, the state Court of Appeals allowed a legal settlement between the State Board of Elections and a group of elderly voters backed by a law firm affiliated with the Democratic Party to go forward, after both sides agreed with Republicans to change one part of the agreement. Late Tuesday, the 4th U.S. Circuit Court of Appeals also decided to not block the settlement.

This means that thousands of voters who have had their ballots held in limbo since Oct. 1, at least, will now get answers. Their ballots will either be accepted, they will have to sign a certification fixing a problem on the ballot’s absentee envelope or they will have to vote a new ballot.

It will take two to three days for counties to work through the backlog and notify voters about their ballot status, said Karen Brinson Bell, elections director for the State Board of Elections.

“Luckily, we’ve got a little bit of time. We were glad to get the clarity through the court so that we could move quickly,” Brinson Bell said. “Any voter also has the option of going and voting in person if they’re comfortable in doing so if they’re worried about the time constraints with the absentee-by-mail process at this point.”

The state is running right up against the deadline to get ballots to voters.

Chris Cooper, a political science professor at Western Carolina University, said he’s expecting voters to return another 250,000 ballots over the next few weeks. For months, election officials have expected thousands of those ballots to arrive after Election Day. But it’s unclear exactly how many voters would be affected by the deadline extension now before the courts.

In July, the U.S. Postal Service sent letters to states all around the country warning them of slower mail delivery time and therefore a risk to voters of not receiving or returning their by-mail ballots on time.

To vote by mail, voters need to have their ballots

When voters request absentee-by-mail ballots, their county board of elections needs to approve that request and mail out a ballot. The Associated Press reported it took more than a week before a ballot was sent in some counties in September and the first few days of October. With fewer requests coming in and more people now voting in-person, the response times are now two to five days.

Yet, even after the ballots are mailed, some voters around the state have waited weeks for ballots that never arrived, having to request a new ballot or decide instead to go vote at an early voting site.

Brinson Bell said she is confident counties can get ballots to voters, even if they request them on the Oct. 27 deadline. But election officials aren’t recommending that.

“We have been encouraging voters all along to make those requests early and return them as quickly as possible, either by dropping them off at the county board of elections or returning them by mail,” Brinson Bell said.

Now, with early in-person voting open in every county and Election Day around the corner, voters have back-up options if they are worried about voting by mail.

Voters can check the status of their absentee-by-mail ballots using the state’s new tracking tool or by looking themselves up in the state’s voter search tool, then checking under the “Your Absentee Ballot” tab. If a ballot is marked “accepted,” that means the voter has done everything properly.

Where the law stands now

In North Carolina, absentee-by-mail voters need someone to witness them voting their ballot. The rule is a deterrent against fraud. Both the voter and the witness need to fill out information on the ballot envelope. If that information is not complete, county elections officials cannot accept those ballots outright. If the witness forgot to sign, those ballots cannot be accepted at all.

The fate of those 10,000 absentee ballots with incomplete information has been mired in uncertainty for weeks, as Republicans and Democratic-aligned groups fight in court over last-minute efforts to change the rules regarding which absentee ballots can be accepted.

Black voters and other voters of color are overrepresented in this group, according to Cooper.

“What that means is that whites who have requested absentee-by-mail ballots are more likely to have had those ballots accepted than people of color,” Cooper said.

But the problem is not likely one caused by racist or discriminatory intent at boards of elections. On this point, Cooper, voting rights advocates and a federal judge who reviewed this issue all agree.

In past years, Republicans made up the majority of by-mail voters. This year, that dynamic is flipped amid criticism of the voting method nationally by President Donald Trump.

Registered Democrats and unaffiliated voters, who are more likely to be voters of color, are using vote-by-mail at much higher rates than Republican voters, state data shows. They are also more likely to be first-time by-mail voters, and therefore less familiar with the process.

“One of the things 2020 has taught us is that the mode of balloting has become politicized, first of all, and obviously is almost a partisan cue at this point,” Cooper said.

In previous elections, absentee-by-mail ballots with errors on the return envelope would be rejected outright. This year, North Carolina has a process to allow voters to fix problems – officially referred to as a “deficiency” – on their absentee ballots.

The official term for allowing a voter to fix their ballot is to let them “cure” the deficiency. This process is meant to ensure that any errors or omissions on the absentee-by-mail ballot envelope are not indications of voter fraud.

But legal challenges that have played out in both state and federal courts have held this process up.

While lawyers and judges worked through the challenges in court, the ever-growing number of deficient ballots sat in secure boxes inside county boards of elections across the state. The State Board of Elections directed counties to not notify any voter that their ballot had a problem, and voters who were already notified could not do anything about it, even to cancel the ballot and request another.

Voters and county elections workers finally got definitive guidance on the cure process on Oct. 19.

As of Monday afternoon, county boards of elections were directed to contact voters whose absentee ballots had problems that needed to be fixed.

Most problems – including missing addresses and signatures in the wrong place – could be fixed by the voter signing a letter to certify that their ballot was properly cast. Counties will send the letter to voters by mail and, if the voter provided it when requesting the by-mail ballot, by email.

But ballots missing a witness signature must be thrown out and a new ballot cast.

How to make sure your ballot is counted

Some voters, like Larry Kline in Durham, will not have to do anything else to have their ballots accepted. Kline submitted his ballot back in September. The Durham County Board of Elections notified him that his ballot envelope had a deficiency and that he could cure it. Kline turned in the cure letter, but not before the lawsuits froze the whole process.

Since the deficiency on Kline’s ballot was not a missing witness signature, the county processed that cure on Monday and accepted his ballot.

This process and the legal back and forth, though, has confused many voters, according to Tomas Lopez, executive director for the voting rights group Democracy North Carolina. His organization sued the state in June, and as a result, a federal judge told the state it must have some kind of cure process for voters.

“If you’re in a situation where you’re trying to figure out what’s going on with your ballot, one of the best things that you can do is contact your county board of elections,” Lopez said.

As long as the ballot has not been accepted by the county board of elections, a voter can still decide to vote in person. That may be the best option, Lopez said.

“We don’t want to discourage people from voting by mail, if that is ultimately the way that they feel most comfortable doing it,” he said. “But I think we are trying to be up front to say, 'Look, the most kind of locked-in, rock-solid way that … if you want 100% certainty, the way to do that is going to vote in person.'”

Voters who chose to vote by mail because they have health conditions that put them at higher risk of serious complications should they get COVID-19 can still vote in person without waiting in line.

For years, North Carolina has had a “curbside voting” option where voters with disabilities or health issues can vote from their cars. But the demand for that option is high this year because of the pandemic.

“I would encourage folks who are looking to curbside vote to recognize that this doesn’t make for a speedier process,” Brinson Bell said.

In at least four counties, Buncombe, Durham, Forsyth and Wake, voters can check the wait times for in-person voting before they go. Voters can go to any early voting site in their county. Early voting is the most flexible voting option, because voters can also turn in their absentee-by-mail ballots in person or register and vote at the same time.

This story was jointly reported and edited by Jordan Wilkie, Kate Martin, Laura Lee and Frank Taylor of Carolina Public Press; Ames Alexander of The Charlotte Observer; Tyler Dukes and Jordan Schrader of The News & Observer; Nick Ochsner of WBTV; Emily Featherston of WECT; Randall Kerr of WRAL; and Jason deBruyn of WUNC.