With Control of Congress at Stake, Trump Reprises a Favorite Theme: Fear Immigrants 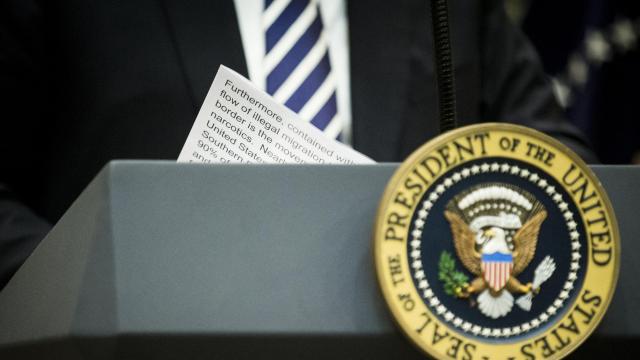 Immigration has been the animating issue of the Trump presidency, and now — with the possibility that Republicans could face significant losses in the midterm elections Tuesday — the president has fully embraced a dark, anti-immigrant message in the hope that stoking fear will motivate voters to reject Democrats.

In a rambling speech Thursday afternoon that was riddled with falsehoods and vague promises to confront a “crisis” at the border, Trump used the official backdrop of the White House to step up his efforts to demonize a caravan of Central Americans that has been making its way through Mexico, assail Democrats, and promote a vision of the United States that would be better off with fewer immigrants.

The president said he had ordered troops to respond to any migrants in the caravan who throw rocks as if they were brandishing firearms, saying, “I told them: Consider it a rifle.” He said his government had already begun to construct “massive cities of tents” to imprison legal and illegal immigrants who try to enter the United States.

The president also played fast and loose with the truth. At one point, he said that 97 percent of immigrants do not show up for their trials; the number is closer to 28 percent. He also said the government is no longer releasing immigrants while they await trial. Meanwhile, migrants are being caught and released at the border regularly, as has happened for decades.

He repeated his oft-stated, misleading description of the situation south of the border, saying that “large, organized caravans” are heading toward the United States, filled with “tough people, in many cases.”

“A lot of young men, strong men,” he continued, “and a lot of men we maybe don’t want in our country.”

“They have injured; they have attacked,” he added.

In recent weeks, Trump has promised a number of actions to demonstrate a renewed crackdown on immigrants. While he has followed through on one of them — ordering an increase in military units on the border — there was no mention in the speech of the presidential proclamation on asylum and the new policy on family separation that he has promised.

Mostly what the president offered was a repeat of the angry rhetoric that has been a central theme of his campaign rallies and in Fox News interviews for the past two weeks.

A new proposal to give migrant families the choice to willingly separate from their children? “We are working” on it, Trump said. The presidential proclamation and regulation aides had promised to bring an end to asylum for unauthorized immigrants? They are “finalizing” them, he added. He promised an executive order next week, providing no details but saying it would be “quite comprehensive.” Raising fears about immigrants has been a central theme for Trump since he first announced he was running for president. At a rally in Columbia, Missouri, on Thursday night, Trump ranted about “caravan after caravan” headed toward the United States.

“We’re not letting them into our country,” he bellowed to a boisterous crowd at an airport hangar.

In the past week, as a series of pipe bombs sent to prominent opponents of the president and then the killing of 11 people at a Pittsburgh synagogue dominated the news, the president’s political team has urged him to put renewed emphasis on it and use his bully pulpit to ratchet up the nation’s sense of alarm about the dangers of migrants heading for the border.

The president did not need much convincing. On Wednesday afternoon, he tweeted out a 53-second, expletive-filled video that features immigrants charged with violent crimes and images of a throng of brown-skinned men breaching a barrier and running forward. The president’s message was clear: Immigrants will kill you, and the Democrats are to blame.

“It is outrageous what the Democrats are doing to our Country,” Trump wrote in the tweet, part of a grim warning about the dangers of immigrants that has left some Republicans — including House Speaker Paul Ryan — uneasy heading into Tuesday’s voting.

Still, the president’s dark rhetoric has clearly put some Democratic candidates on the defensive, especially in conservative states where Trump won by wide margins in 2016. In the last several days, Sen. Claire McCaskill, D-Mo., has embraced some of the president’s anti-immigrant messaging as she fights for re-election, telling Fox News that “I do not want our borders overrun, and I support the president’s efforts to make sure they’re not.”

In his remarks on Thursday afternoon, Trump appeared to promise a lethal response from the military if migrants threw rocks at soldiers. At Northern Command, the military headquarters overseeing the newly announced deployments to the border, military officials were shocked upon hearing the president’s comments.

A Defense Department official said the U.S. military’s rules of engagement allowed deadly force to be used if a service member was faced with an imminent threat of death or injury. But the official said the military units headed to the border with weapons, such as the military police, would keep them stored unless told otherwise. The official could not say if they would be issued ammunition, but did not expect them to be in a position to use their weapons.

But the president dismissed questions about whether all of his ideas would be legal under U.S. law.

Others say that it would depend on the details of Trump’s proposals, which have not been disclosed. If Trump moves to deny asylum to all unauthorized immigrants, for example, that would be illegal, according to Stephen Legomsky, a Washington University School of Law professor and former chief counsel for U.S. Citizenship and Immigration Services.

“Such a policy would be in clear violation of the U.S. asylum laws and an equally clear violation of our international treaty obligations,” he said. “Once a person enters our territory, there is no analogous law that permits a blanket denial of asylum.” But details aside, Trump is betting that a relentless focus on the threat he envisions from immigrants crossing the Mexican border, combined with his repeated assertion that Democrats are to blame for letting them into the country, will energize conservative supporters. And he is hoping that the dark imagery will not alienate suburban voters — especially women — who have already been abandoning Republicans in droves.

It is a risky bet. Last year, the Republican candidate for governor in Virginia lost after running dark ads warning of the dangers of marauding MS-13 gangs in the state. And the president’s determined effort to shift the conversation away from issues like low unemployment, tax cuts, conservative Supreme Court justices and reduced regulation has worried many Republicans.

At the beginning of the week, Trump’s campaign put out a 60-second television ad appealing to the message those Republicans have advocated. It featured a suburban woman who frets about the possibility that the economic recovery could be fleeting. But the president’s comments about the dangers of the Central American caravan and his new ad about violent immigrants attracted far more attention.

Two people close to Trump declined to say whether it was made by the White House video unit or someone on the campaign. But one White House official, who was not authorized to speak publicly, said that it had been in the works for several days, and was released Wednesday in an effort to change the focus of cable television from the pipe bombs and the Pittsburgh killings.

“My guess is this is exactly the reaction they were looking for,” said Jim Innocenzi, a Republican media strategist, referring to the outraged responses that have driven news coverage of the immigration ad. “It accomplished the goal.”