With a Hollywood Touch, Cuomo Tries to Push Trump on Rail Tunnel 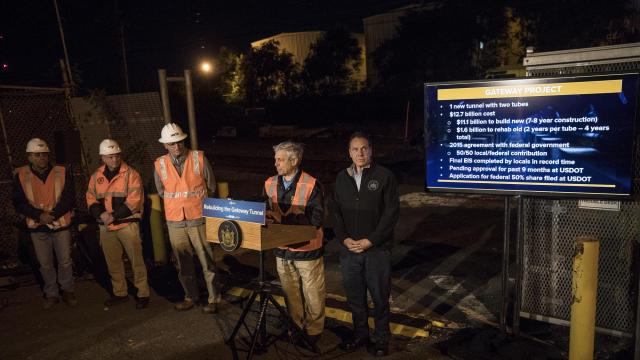 President Donald Trump and Andrew Cuomo, the liberal governor of New York, may not share much common ground, but they both like to build big things.

Cuomo, who fancies himself a modern-day Robert Moses, wants to appeal to the master builder in Trump to gain his support for a new $11 billion rail tunnel under the Hudson River that is critical to the region’s economy.

To make his case, Cuomo led a late-night expedition into one of the century-old rail tunnels beneath the river to gather evidence of the urgent need to replace them. And taking a cue from Hollywood, he brought along a film crew.

“If anything is going to convince the president, seeing is believing,” Cuomo said Wednesday, standing on a flatbed truck that carried him over the rails halfway across the Hudson. The tour was turned into a video designed solely to win over an audience of one who sits in the Oval Office.

The fate of the plan to build a new tunnel, known as Gateway, is in the president’s hands. New York and New Jersey have pledged to provide half of the estimated cost. The administration of Trump’s predecessor, Barack Obama, had agreed to cover the other half. But the Trump administration reneged on that arrangement.

“We’re nowhere right now,” Cuomo said, describing the state of talks between the regional officials and the White House. “Are we open to negotiate? Of course. But there’s just no conversation right now.”

Cuomo’s subterranean adventure marked a complete turnabout for him. In 2015, he disavowed any responsibility for replacing the crumbling tunnels that carry trains operated by Amtrak and New Jersey Transit to and from Pennsylvania Station in Manhattan.

“It’s not my tunnel,” Cuomo said at the time.

But now he talks about the importance of maintaining a dependable rail link between New York City and the states west of it.

“The New York concern is that these are people who are coming into New York to work,” he said. “It would have been easy but irresponsible for me to say it’s not my problem.”

It became his problem, at least in part, when the Port Authority of New York and New Jersey became the sponsor of the Gateway project. Cuomo controls the Port Authority, along with his counterpart in New Jersey, Gov. Philip D. Murphy, who like Cuomo is a Democrat.

Officials in the two states have been pushing for a new train tunnel across the Hudson for years. Work had begun on a project that preceded Gateway, but in 2010, Chris Christie, then the Republican governor of New Jersey, canceled it.

The need for a new passageway grew much more dire six years ago when Hurricane Sandy flooded the rail tunnels with “a toxic stew of Sandy salt water,” said Rick Cotton, executive director of the Port Authority. Since then, he added, the residual salt has been eating away at the concrete-and-steel walls of the tunnels and corroding the high-voltage cables that provide power through the tubes to Penn Station.

“This is what lies ahead on a massive scale if we don’t replace these tunnels,” Cotton said.

Cuomo pointed out spots where large chunks of the concrete walls were missing, and steel spines that had rusted and splintered.

Pressing his point, the governor climbed off the truck and onto one of the shelves that border the tracks, and dangled his leg into a chamber that holds the 12,000-volt cables. He peeled off a strip of metal so thoroughly rusted that it shed flakes as the governor pointed it toward the truck.

“There’s nothing you can do to arrest it,” he said. “The salt is in those cables.”

That progressive decay is threatening to cause the shutdown of the tunnels for extensive repairs that would take years to complete, an inevitability that transportation experts say would cripple the economy of the Northeast. The tunnels, which were built in 1910, carry about 450 trains every weekday.

During the commuter rushes in the morning and evening, as many as 24 trains pass through the tunnels every hour. But the shutdown of one of them would leave just one track in and out of the city, cutting the capacity down to just six trains per hour.

“I’m hoping that when the president actually sees the video and sees the damage and understands that you’re talking about the northeast United States — we’re not talking about one subway stop here,” Cuomo said. “I hope he gets the message.”

The video was sent to Trump on Thursday. No word yet on whether he has seen it.