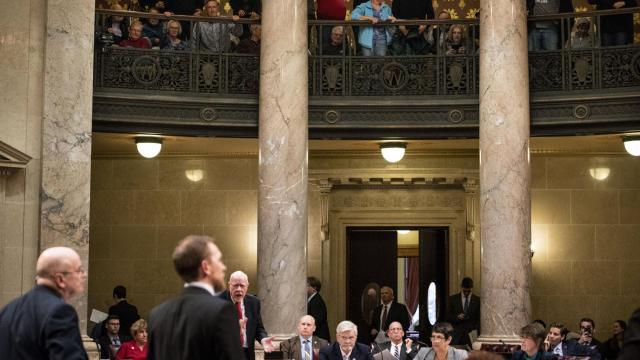 MADISON, Wis. — When Wisconsin Republicans pushed through a sweeping set of bills Wednesday to limit the power of the state’s newly elected Democrats, it was another hardball maneuver by a man who has played a key role in driving the state sharply to the right.

In the days after Gov. Scott Walker’s stunning loss last month — the end of eight years of one-party control of the state’s government — Robin Vos, the Republican speaker of the Assembly, was defiant.

“We are going to stand like bedrock to guarantee that Wisconsin does not go back,” Vos told local reporters after the midterms.

Vos became the first official to publicly suggest that Republicans consider reining in the authority of the incoming Democratic governor, Tony Evers. “If there are areas where we could look and say, ‘Geez — have we made mistakes where we granted too much power to the executive,’” he told reporters, “I’d be open to taking a look to say what can we do to change that to try to rebalance it.”

This week, during an extraordinary special legislative session, Republicans managed to do it. After hours of mysterious closed-door meetings that went past midnight, the Wisconsin Senate convened at 4:30 on Wednesday morning and passed by one vote a package of bills devised to curb the powers of the incoming Democratic leaders. The state Assembly followed suit by a much larger margin later in the morning.

The legislation was aimed at undermining Democrats. There would be a new limit on early voting, which tends to benefit Democratic candidates, after an election that saw record-breaking turnout. Lawmakers, not the governor, would control the majority of appointments on an economic development board. The legislation would also prevent Evers from banning guns in the Wisconsin Capitol without permission from legislators.

The bills would also require Evers to get permission from lawmakers to seek adjustments on programs run jointly by federal and state governments, such as public benefit programs. The legislation would block Evers’ ability to withdraw the state from a lawsuit challenging the Affordable Care Act, a major campaign promise.

But the legislative package was so sprawling and rushed that many Democrats were still trying to assess the damage.

“Wisconsin has never seen anything like this,” Evers said in a statement. “Wisconsin values of decency, kindness, and finding common ground were pushed aside so a handful of people could desperately usurp and cling to power while hidden away from the very people they represent.”

Walker, the one-time presidential hopeful, has signaled support for the measures, though he has yet to sign them.

For eight years, Vos has been an important ally to Walker as Wisconsin Republicans have carried out a series of uncompromising moves that stunned Democrats, sent protesters flooding into the Capitol and left lawmakers dazed in marathon hearings.

Together, they passed measures that crippled Wisconsin unions, a bedrock of Democratic Party power for years. In 2011, they cut benefits and collective bargaining rights for most public sector workers. In 2015, they pushed through a so-called right-to-work bill over the furious chants of labor union members.

“This all started a long time ago and it’s more of the same,” said Martha Laning, the chairwoman of the state’s Democratic Party. “This is what their leadership has been, but this time it’s more than just Democrats who are appalled by the level of this. This is as brazen as it gets, to do this after an election you don’t like.” In recent days, Vos, 50, became the most visible, most fervent spokesman for the package of measures that would limit Evers’ power and strengthen that of lawmakers. Many of the bills introduced last week were proposed by a committee chaired by Vos, who is in his seventh term in the Assembly and became speaker in 2013 after serving as chairman of a powerful joint finance committee.

Vos, a former Racine County supervisor who has owned a popcorn packaging company, has a reputation in Madison as being a bulldog legislator who is effective at keeping party members in line.

The package of bills passed Wednesday take aim at the powers of not just the governor, but those of the newly elected Democratic attorney general, Josh Kaul. Under the legislation, the attorney general would need lawmakers’ approval to settle certain suits, and legislative leaders would be permitted to intervene and hire their own lawyers — in addition to the attorney general — if the constitutionality of a law was being challenged. The attorney general could no longer appoint a solicitor general to represent the state in major lawsuits, and would be restricted in how he spent settlement money, which lawmakers would now oversee.

Senators also confirmed 82 last-minute appointees of Walker’s despite the protestations of legislative Democrats, who said the candidates had not been thoroughly vetted, and of Evers, who asked that the posts remain vacant until he takes office in January. The posts ranged from the obscure, like the pharmacy examining board, to the high-profile and vital, such as the university board of regents.

During news conferences and on the floor of the Assembly this week, Vos defended the legislation as a necessary check on executive power and brushed aside claims of an undemocratic power grab. “What it does is make sure we have an equal amount of power at the table,” Vos said.

His tone was brusque at times, accusing the Democrats of fanning hysteria and overstating the effects of the bills.

“You are so grossly exaggerating the words of this bill it makes me sick,” Vos said.

Other times, Vos sounded more conciliatory. “I certainly don’t think that what Gov. Evers ran on is evil. I think that he loves Wisconsin,” Vos said shortly before the final vote Wednesday. “No one here doesn’t respect the state. We have different paths to get to the same destination.”

But Gordon Hintz, the Democratic leader in the Assembly, said the legislation undermined the power of democratically elected officials.

“We’re here because you don’t trust Tony Evers and you don’t want to give up power,” he said. “You’re sore losers.”