Raleigh, N.C. — The first taste of winter finally made its way to North Carolina Thursday morning.

Days after enjoying temperatures in the 70s, parts of the Triangle saw a mixture of freezing rain and sleet early Thursday that later turned to wet snow. Meanwhile, there were reports of freezing rain in the Fayetteville area and light snow in Sanford.

The weather changed over to mostly rain across the central part of the state by late morning. Temperatures are expected to be in the mid-30s Thursday night. On Friday, highs are expected in the lower 50s.

"I was in the right lane, going about 45 to 50 mph, and I must have hit a patch of ice and just cut across all four lanes," said driver Nelson Casko, whose car slammed head-on into a median guardrail on Interstate 40 near Aviation Parkway. "I grew up in Boston. I know how to drive in the snow. Like I said, once I started fishtailing, I just lost total control of the vehicle."

The Highway Patrol was so backed up that dispatchers told drivers in wrecks without injuries that it could be up to two hours before a trooper could respond. Col. Fletcher Clay, the commander of the Highway Patrol, decided to put members of the administrative staff, including himself, out on the road.

"Myself, the lieutenant colonel, all of the command staff, we all went out to help the Wake County-based troopers. We were just trying to improve response times," Clay said.

State Department of Transportation crews sprayed a brine solution on major roads Wednesday afternoon to prepare for the winter storm. The salty spray helped prevent ice from forming on the roads and made the work of salt and sand trucks easier on Thursday morning.

But the wintry conditions contributed to a fatal accident on U.S. Highway 264 near N.C. Highway 231 in Nash County.

Road conditions were expected to improve throughout the day, but authorities urged motorists to slow down and drive safely.

"When you look at the big picture, we could have been socked a lot worse than what we were by mother nature," Clendenin said. 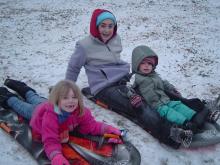 Many parents criticized the Wake County school system for waiting until about 7 a.m. to call off classes, but Evans said officials had little choice.

"We try to make the call as early as possible to minimize the impact on families because we do know families have to scramble in times like this. But given the fact the storm came through as fast as it did and that it was very dicey from an intensity point of view, we felt it was more prudent to take a cautious decision," Evans said.

Wake County students who were scheduled to have exams Thursday will have those tests rescheduled to Friday, he said.

Durham Public Schools also won't make up the missed days, while Chapel Hill-Carrboro City Schools will hold a make-up day on Monday, which had been scheduled as an optional staff workday. Make-up days for other school districts haven't been announced.

The winter weather comes nearly two years to the day that less than an inch of snow brought the Triangle to a standstill. Slick roads created gridlock, and people spent hours trying to get home from work. The weather caused school buses to get stuck, and some students had to spend the night at school.

Raleigh leaders adopted a snow plan in place to avoid a repeat. The plan includes asking drivers to stay off main roads and keep phones line clear if there is unexpected winter weather.

Another batch of mixed precipitation is possible in Central North Carolina Sunday afternoon and evening.

Please post your observations about the winter weather in the comments area at the bottom of the story. You will need to be registered and logged in to do so. We also invite you to submit your weather photos.