Traffic and travel: State officials say avoid driving if you can

Raleigh, N.C. — After a snow system dumped up to a foot of snow across North Carolina, motorists were urged to stay off the streets and avoid roads that were becoming more treacherous moment by moment.

At a 5 p.m. press conference, Gov. Roy Cooper said crews have placed two million gallons of brine on state roads using 600 trucks and 5,000 tons of salt and sand since Monday. The North Carolina State Highway patrol said it has answered 2,200 calls for service, nearly 1,600 of which were related to collisions, across the Tar Heel State.

"The good news is that there have been no fatal accidents so far in North Carolina," Cooper said.

Cooper said drivers should stay off the roads if at all possible.

"Wherever you are tonight, you really need to plan to be there through tomorrow morning," WRAL traffic reporter Brian Shrader said.

Three lanes of Interstate 440 were closed for about two hours near Capital Boulevard on Wednesday night after a four-car crash that left one person pinned between a vehicle and a guard rail.

At one point, Interstate 85 was closed in both directions near Exit 68 due to multiple crashes although it reopened several hours later. A truck that slid off the roadway was blocking an I-85 ramp near Duke Street at about 4:30 p.m.

Two women were rescued Wednesday afternoon by a Durham police officer after their car slid off an icy road and into a creek. No injuries were reported.

The winter weather system has prompted the cancellation of several flights at Raleigh-Durham International Airport and by 5 p.m., Southwest Airlines had canceled all flight operations through noon Thursday. Passengers were urged to check with their carriers before heading to the airport since many flights were delayed or scrapped altogether. 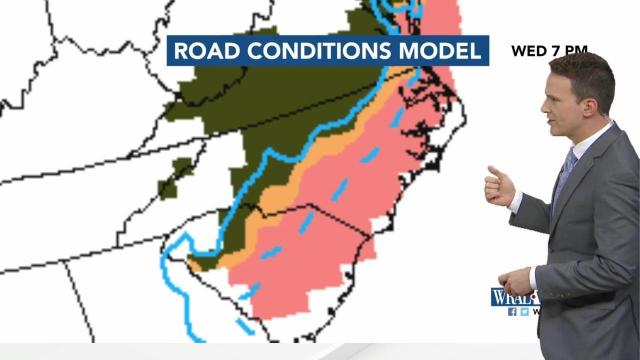 Several motorists were seen on the side of the road after becoming stranded.

Early in the day, Sgt. Michael Baker said residents who could stay off the roads should do so. He said all troopers were on standby status and could be brought in on a needed basis. Officials in the city of Cary said they began plowing roads when the snow has accumulated to 1 inch in depth.

NCDOT crews put down about 138,000 gallons of brine over the past few days and will begin laying down salt when the temperature drops Wednesday night.

"You just have to salt overnight and when the sun comes up and the temperatures come up in the morning, that's when we put the plows out and push it off," said Jason Dunigan with the Wake County DOT.

"As those temperatures drop tonight, that slush hardens over and we've got an ice rink," he said.