Raleigh, N.C. — Thursday's line of severe storms had passed Friday morning, but now the threat is wind and flooding.

The Triangle can expect sustained winds of 15-25 mph and gusts of 40-50 mph Friday morning and into the afternoon.

Trees that had fallen onto houses and into roads left over 13,000 still without power in central NC, and over 30,000 were without power across the state. A wind advisory has been issued for Wake, Durham, Orange and many other counties from 5 a.m. until 4 p.m. Click here for all weather alerts. 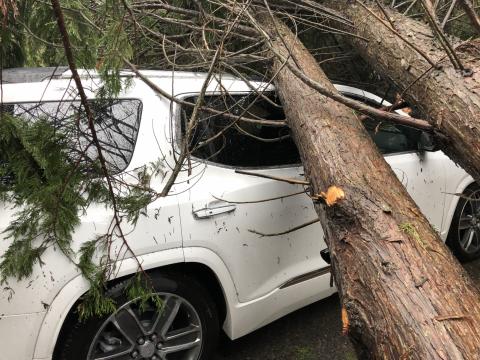 The primary risks Friday morning and afternoon were predicted to be fallen trees, flooding and high winds. Several roadways were reported impassable due to trees. With the saturated ground and Friday's afternoon predicted to be blustery, there is still more risk of trees falling and more outages occurring.

See which NC rivers are expected to flood

Many school systems opened on a delay, including Wake and Durham schools.

Damage around the Triangle

A Johnston County school bus crashed, causing several reported injuries. Several people were loaded onto an ambulance, but authorities could not confirm if students were involved. Johnston County Public Schools were under a two-hour delay on Friday but did not close like other schools in the viewing area. Officials said the bus was headed for Corinth Holders High School with 13 students on board. One student was taken to a nearby hospital for minor injuries, and the bus driver was transported due to neck pain.

A small fire started on a power pole on U.S. 401 in Garner after strong winds brought down power lines. U.S. 401 is closed near Old Stage Road.

In Johnston County overnight, a car hydroplaned on Little Divine Road in Selma and slid into a tree. The tree crushed the driver’s side door and trapped the driver. Crews rescued the driver, who was sent to WakeMed with injuries.

The Glenwood Ave. sign hanging over I-440 blew loose in the high winds, flying over I-440 before slamming into a passing vehicle's windshield. Drivers are encouraged to be cautious driving Friday due to wind advisories, which have potential to cause flying debris.

The flooding in roadways caused trouble during the afternoon, making roadways impassable. One van was trapped in floodwaters in an apartment complex in Chapel Hill.

There were several reports of fallen trees crushing parked cars, pulling down power lines and blocking roadways. One Raleigh family had a frightening experience as four trees crashed down on their home. They said they raced to their basement as they heard the trees falling around them. Portions of their home flooded, as well.

Charlotte and Bunn were two of the hardest hit communities, with powerful winds and even tornado warnings. Like many homes and businesses, the Bunn Fire Department reported wind damage. Friday's sustained winds of 15-25 mph with gusts of 40-50 mph could cause more wind damage around the Triangle, especially with the saturated ground. 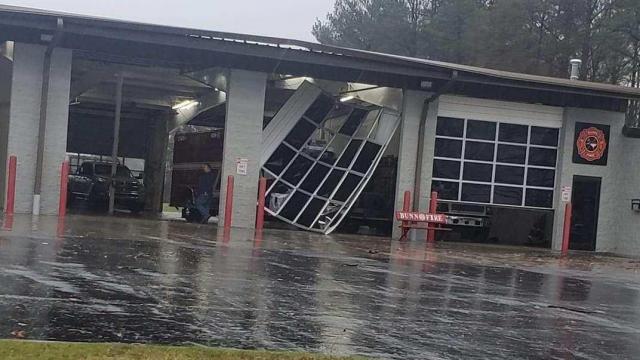 10:45 a.m.: Durham Public Schools students announced Wednesday, Feb. 12 will be a make-up day for all.

9:20 a.m.: Officials report at least 10 trees are down in Raleigh, including one at Athens Drive High School stadium.

7:50 a.m.: Wilson and Rocky Mount were hit by the line around 7:30 a.m. Gardner said people should expect to have more trees down after the lines passes through.

6:45 a.m.: A line of showers and high winds pushed through Raleigh.

Friday morning wind speeds in the Triangle area were around 15 mph sustained, with gusts upwards of 24 mph. WRAL meteorologist Elizabeth Gardner said those wind speeds are likely to pick up as we head through the morning.

The Triangle area had 36 storm reports as of Friday morning -- 29 of wind damage and 7 of hail -- but those numbers could grow through out the morning and afternoon.

All that wind is going to blow in colder air, causing temperatures to drop from the spring-like warmth the Triangle enjoyed earlier in the week. Friday morning temps were around 57 degrees, but will drop through out the day to a chilling 31 overnight.

Temperatures quickly rebound back into the upper 50s and 60s by Sunday, with a high of 67 on Monday. However, the Triangle has more potential for showers and storms next Tuesday.