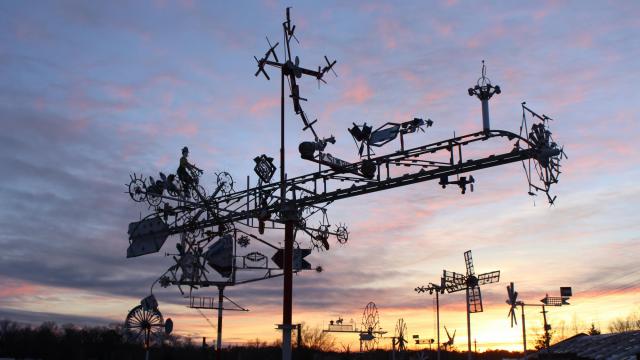 WILSON – On a recent windy day every wheel spins furiously in mesmerizing colorful swirls of motion in the Vollis Simpson Whirligig Park in downtown Wilson. To see the 30 enormous folk-art sculptures built by the late Vollis Simpson are alone worth taking the exit off nearby Interstate 95 or Highway 264.

The whirligigs were lovingly reconditioned and repaired and dedicated in the park last November. Now, with warm weather, the Whirligig Park will become the site of another swirl of activities worth taking the Wilson exits from the highways.

Gig in the Park!

The Whirligig Park will be the site of a free concert series to bring some of the best of east coast beach music, classic rock, rhythm and blues, reggae, country, tribute bands and more.

This family-friendly event offers something for everyone, including an array of food trucks, kids' activities, dancing and cold beverages. Free photos of attendees will be offered as souvenirs at the park’s first concert.

Movies in the Park

On Fridays starting on April 27, be sure to bring a chair or a blanket at 8 p.m. when the Whirligig Park becomes the site to watch family-friendly movies.

The new Wilson Farmers & Artisan Market will be held Wednesdays and Saturdays, 8 a.m. until 1 p.m., in the Pavilion at the Whirligig Park starting April 21 through Oct. 27.

Artisans and artists will offer handcrafted items such as jewelry and paintings, soaps and lotions, Adirondack and pallet furniture, and home-baked breads and desserts.

Adjacent to the structure, designed with a roofline emulating the historic tobacco warehouse that once sat on the park’s site, are picnic tables where visitors may enjoy the tasty treats available from the wide array of farmers’ offerings and food trucks.

All Whirligig Park events are sponsored by the Wilson Downtown Development Corp.

He kept making his "whirligigs" until about six months before he died at the age of 94 in May 2013.

His field of whirligigs was 11 miles outside Wilson, and after the rise of the Internet, Simpson’s farm became one of Wilson County’s top tourist destinations. His works appear at the American Visionary Art Museum in Baltimore and the American Folk Art Museum in Manhattan.

As Simpson’s health declined, he wasn't able to grease or paint the 50-foot sculptures made from recycled industrial parts.

In 2010, a plan was made to create the Vollis Simpson Whirligig Park in historic downtown Wilson. The whirligigs were restored, rebuilt in some cases and repainted. The Park opened in Nov. 2017.