Wilson County, N.C. — What started as an investigation into dead dogs found in trash bags around Wilson County has turned into a political issue.

Ten dogs have been found dead over the past few weeks and Sheriff Calvin Woodard posted online that he believes the timing of the scrutiny of the case is somehow designed to undermine his upcoming election to retain his office.

After several news stations covered the investigation into the dead dogs, Woodard made a post on Facebook questioning why the story was getting coverage so close to the election and implying that there was an agenda to derail his campaign. 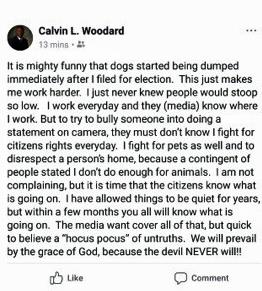 The posts have since been deleted, but not before citizens in Wilson County saw them.

“I was really concerned that an elected official of his caliber would react in that manner,” said resident Michelle Inscoe. “For him to stoop to that level and to make that rant on Facebook, I don’t think it was very becoming.”

The incidents have Wilson citizens and animal rights activists demanding answers from Woodard and an online petition has called for a change in leadership at the sheriff’s officer and animal control.

“They have the right to know what’s going on in the community and what’s going on with the investigation,” said sheriff candidate Dinise Williams. “I don’t think anyone is conspiring against the sheriff during this campaign.”

Williams and Chris Boykin are facing Woodard in the upcoming Democratic primary.

“There is no conspiracy against the sheriff or anyone else,” Boykin said. “I don’t think anyone has an agenda as far as dumping these dogs. It’s a tragedy, whoever is doing it is a sick person.”

WRAL News has made 14 attempts to get a comment from Woodard or his spokesperson, including visits to his office, phone calls, emails, texts and Facebook messages, but he has not responded.

Woodard’s post was shared by a local blogger who supports him and says animal welfare issues have been a bit problem in Wilson County for years and that the sheriff inherited the concerns and is being unfairly targeted.

In a previous statement to WRAL News, a spokesperson for the Wilson County Sheriff’s Office has said several dogs have been examined to determine cause of death and evidence suggests they have died from natural causes or medical issues and their bodies are being disposed of improperly.