Wilson County man has more than 250 tattoos of celebrity autographs

Lucama, N.C. — A Wilson County man has a very unique goal -- to collect the most autographs from famous people and have them tattooed on his body.

"You'd be amazed at what I've been asked," said Griffin, a walking autograph book. "I have them on my arms, my legs, my sides, my back, and I've got six on my neck."

Most of the signatures are those of celebrities, like Maggie Peterson from The Andy Griffith Show and Lee Meriwether from the Batman television show.

Griffin has met each person behind the pen. He even met Burt Reynolds and took a photo with him three weeks before the actor died. 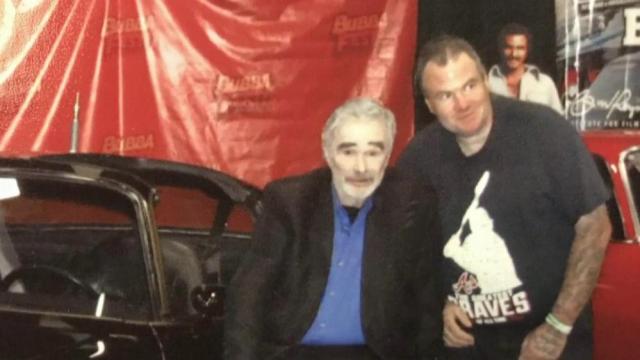 "I had been wanting to meet him since I was a kid," said Griffin, who usually meets the celebrities at shows in big cities like Chicago or Miami.

Griffin currently has 254 autograph tattoos, and he's getting more. Some stars sign right on the skin, he said, and others sign on paper. During Griffin's interview with WRAL, he even asked Renee Chou if she would sign him. 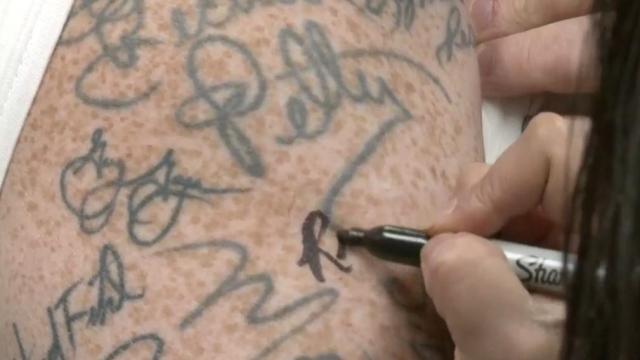 After he gets his autograph, tattoo artist Ernie of Warlock's in Raleigh draws it right on. "I get stopped quite a bit in restaurants and some people have the crazy notion to ask me if they're real," laughed Griffin. "I say, no, my wife gets bored at night and she just writes on me."

Griffin said his goal is to have 1,000 tattooed autographs -- as long as he doesn't run out of space first. He has tattoos from wrestlers, actors and athletes -- but Renee was his first news anchor.

Griffin would like to be recognized by the Guinness Book of World Records. There is not a category for most autograph tattoos, but he has put in that request.