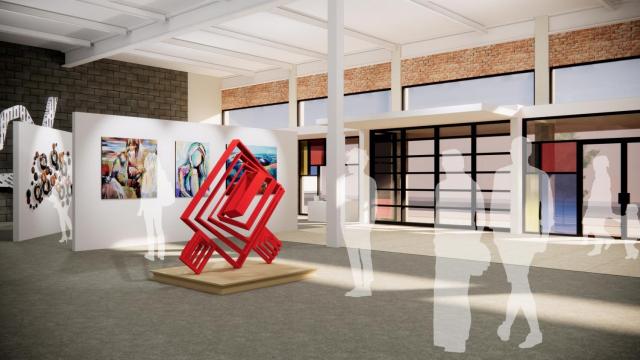 The Wilson Arts council is in the midst of a rebrand. With a new logo, building renovations, curriculum expansions and more, the organization is hoping its relaunch will open up new opportunities to an already artistically rich community.

Cathy Hardison, director of Wilson Arts, has been actively involved with each step of the rebranding and renovation — all of which the organization hopes to see completed by December 2020. For her, listening to community input and filling areas of need were crucial in starting the process on the right foot forward.

"We're trying to be a vibrant cultural arts center that's accessible to every person in the community and we felt we would be more approachable if we changed our public-facing name to Wilson Arts," said Hardison. "We're hoping that through all of these pieces, people will look to us for art programming, and we can realize our full potential as a vibrant cultural arts center."

While the building renovation has been in the works for some time now, the logo refresh was the first major step in creating a new image — both literal and figurative — for Wilson Arts. The former logo, which referenced sculptures down the street from the council's previous location, no longer had a real connection to the organization. The new logo, created by a local artist, still incorporates the primary colors (an important representation of the arts) from the previous logo which now intertwine to form a "W."

In using these three primary colors, the new logo not only retains a connection to the older version but also serves a symbolic purpose. The primary colors of red, yellow and blue can be used to create almost any other color — a nod to a foundational principle of art as well as the diversity of the Wilson community.

"We refreshed our strategic plan about a year-and-a-half ago, and through that process, we did some surveying in the community, and we found that the connection with our brand wasn't as strong as we wanted it to be," said Hardison. "We were able to use those survey responses to then form our new strategic plan and bring home the core belief that the arts are for everyone."

The new logo is just one piece of the puzzle to a new brand.

Since the council's previous space was in a building on the National Register of Historic Places, they wanted to preserve the historic elements as much as possible — a task that would've been both time-extensive and costly. Instead, they decided to move their operations just a stone's throw down the street from the new Wilson Arts Building, which offers 20,000 square feet of space for a fresh new start.

As the needs of Wilson Arts and the community at-large have changed over the years, its new home base will give the organization a chance to better address those needs.

"Phase one is going to feature a 5,000 to 6,000 square-foot gallery space, and we combined all the small galleries in our former space and put them together. Additionally, the gallery walls are going to be moveable so that we can design around the artworks," said Hardison. "Having that flexibility, the ability to have a single artist displaying 20 pieces but still not filling up the whole space, is going to be amazing."

In addition to the more intentional use of space, the building will also be one of the largest spaces in Wilson. This creates opportunities for Wilson Arts to host more community outreach events, from art markets to live performances, as well as rehearsals for the local theater program.

The building will also house several rooms for art classes and conferences, as well as a kitchen for culinary classes.

"Having space for all this to happen and creating a hub of artistic energy is going to be super great for the city," said Hardison. "I've had people come in and say, ‘The pandemic has had me down, but this is something to look forward to.' They'll have these experiences here in Wilson in a way that they haven't had them before, and it'll be a new and exciting type of fun."

Wilson Arts couldn't be successful without the support of the Wilson community, and luckily, it already had a strong artistic base to build upon. While the organization's new building will be the latest addition to the arts scene, it's far from the only one.

From performing arts at the community theater to large-scale installations downtown to museums and galleries up and down the streets, Wilson has come into its own as a hub for arts and culture. The development of the council's revamped headquarters and increased curriculum will serve as yet another piece of the community's vibrant atmosphere.

"I've had the pleasure of working for another art council in the past, but in Wilson there's a unique sense of community — and for a city of this size, there is a lot of innovation going on in the art world," said Hardison. "This art center is going to anchor that spectacular element of Wilson and give people a place to go to share in it."