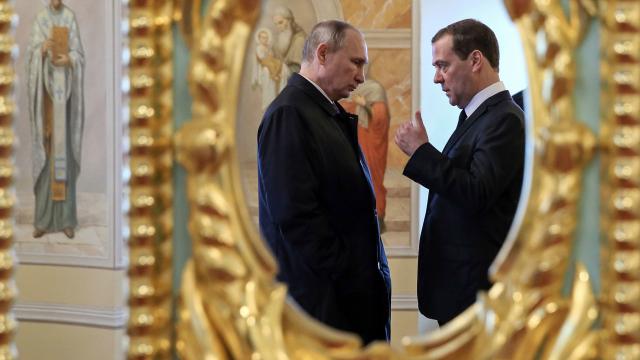 By Analysis by Luke McGee, CNN

CNN — When Russia's entire government resigned on Wednesday, even long-term Kremlin observers were taken by surprise.

Earlier in the day, Vladimir Putin had announced his plan to push through reforms that would make his successor as president less powerful, by redistributing power in such a way that that the Russian parliament and office of prime minister will have greater clout.

He thanked the resigning members of the government for their service, but said that "not everything worked out."

In the last two years, Putin's approval ratings have taken a dip, partly a result of unpopular pension reforms and a stagnating economy. 2019 was also riddled with street protests over municipal elections as Russia's fragmented opposition expressed discontent with what they see as a president and the ruling elite that have overstayed their power.

However, as the exact details of this mass resignation -- led by current prime minister and former president Dmitry Medvedev -- unfurled, it was clear that this was no protest at Putin's proposed reforms.

In his statement on the government's resignation, Medvedev indicated that it was doing so in order to make life easier for Putin.

He said that the president had "outlined a number of fundamental changes to the constitution," and that "in this context, it's obvious that we, as the government ... should provide the president of our country with the opportunity to make all the decisions necessary for this."

Those changes appear to be a redistribution of power, giving parliament the power to appoint prime minister, who will then appoint a cabinet to be approved by parliament. In Putin's own words: "In this case, the president will be obliged to appoint them; that is, he will not have the right to reject parliament-approved candidacies."

The Russian constitution forbids Putin from standing for re-election as president in 2024. However, there is nothing stopping him from becoming prime minister, as he did in 2008, when he and Medvedev swapped roles for four years.

"My personal view is that this is a stitch-up between Putin and Medvedev," said Valeriy Akimenko, a long-term Russia analyst currently working for the Conflict Studies Research Centre. "Medvedev not an independent figure by any stretch of the imagination and made no waves against Putin during his time as president. As was the case in 2008, this looks like a mutual agreement between the two."

Not all analysts believe it is inevitable that Putin will eventually install himself as prime minister. Oleg Ignatov at the Center For Current Policy, a Moscow-based think tank, points out that Putin also spoke about changing the constitutional role of Russia's State Council, an advisory body to the head of state.

"There are rumors that Putin could lead the new State Council rather than becoming the new Prime Minister," Ignatov told CNN. "If this happens, it's possible that his word will be the last word. He will not be interested in technical details, but everything will be under his control."

Akimenko agreed that this sort of role could play in Putin's favor: "The State Council's future role is currently undefined, but it could be an arbitrator, meaning that when there is a dispute, the State Council could have a final say."

Whatever the outcome, a narrative of Putin consolidating his grip on power is already emerging. Alexi Navalny, Russia's most outspoken opposition leader, tweeted that "remaining the sole leader for life, taking ownership of an entire country, and appropriating wealth to himself and his friends is the only goal of Putin and his regime."

By taking steps to tighten his grip on power, Putin is also sending a message to the wider world. More Putin in Russia means more Putin on the international stage. And if the last few years have taught us anything, that means a Russia willing to go to extraordinary lengths to act as a direct rival for influence to the US-led world order -- and create more headaches for America and its allies.