Will the Defeat of the IDC Bring a Blue Wave in Albany? 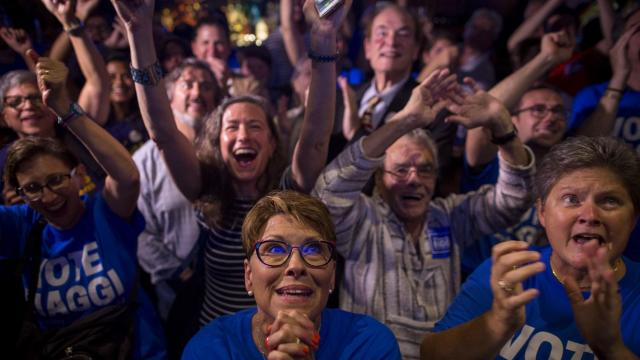 They had already been hailed as courageous reformers, the insurgent candidates who dared take on New York state senators laden with money, influence and name recognition.

But as the results from last week’s Democratic primary settled, the challengers who successfully toppled seven incumbents immediately took on a new mantle as the new, pulsing nucleus of hopes for progressive change.

For many in the leftmost wing of New York’s Democratic Party, who had watched in dismay as Cynthia Nixon and her allies fell in their quests for statewide office, their plans for progressive, even radical reform in Albany were redirected from the defeated statewide candidates to the seven Senate victors. Six of the vanquished incumbents were former members of the Independent Democratic Conference, a much-reviled group of Democratic senators who had empowered the Republicans.

“By a power of 10,” George Albro, a co-chairman of the New York Progressive Action Network, said of how the Senate challengers’ wins would supercharge progressives’ influence in the state capital.

But how much of that optimism is rhetorical, and how much of it is actually likely to become reality? Let’s break it down.

Before anyone can talk about a progressive agenda in Albany, there is one little obstacle: The Democrats need to take back the Senate.

Currently, the Republicans hold a razor-thin majority in the chamber, with 32 votes to the Democrats’ 31. For Democrats to regain leadership of the chamber, defeating once-disloyal Democrats in the primary is not enough. They must also flip Republican seats in November’s general election.

It seems likely that the Democrats will succeed. The massive turnout in the primary — nearly three times higher than four years ago — lent credence to the theory of an energized Democratic base, and several Republican incumbents in swing districts have said they are not seeking re-election.

If Democrats succeed in taking the Senate in November, what comes next is up for debate.

— What Do Progressives Say?

For the progressive wing of the Democratic Party, a new majority could usher in long-awaited policies that have been sidelined for years by the Republicans. (The Democrats control the state Assembly by a virtually untouchable majority, and Cuomo is expected to win re-election as well.)

That could mean, finally, the codification of Roe v. Wade. An overhaul of campaign finance laws. An expansion of voting rights.

The Assembly has long passed bills to do all those things, only for them to die in the Senate. “I think now it’s maybe going to be the reverse dynamic. The Senate is going to take the lead on voting on a lot of these things,” Albro said. “They’ve been in the wilderness for 20 years and are champing at the bit to do this.” Sen. Michael Gianaris of Long Island, who had recruited several of the anti-IDC candidates to run, said the ouster of the renegade group’s former members would embolden Democrats to pass legislation that may once have given them pause, for fear of pushing the IDC back toward the Republicans.

“That whole question of, ‘Is that always a threat that’s looming?’ is for the most part settled now,” Gianaris said. “We don’t have to walk on eggshells.”

— How Will Insurgency Play in November and Beyond?

In order to flip swing seats upstate or on Long Island, Democratic candidates there would need to be more moderate than the victorious primary challengers, all but one of whom came from New York City’s liberal bubble, said Bruce Gyory, a Democratic political consultant.

“The progressive pulse doesn’t beat there nearly as strongly,” he said. “That could move the equilibrium point in the conference a little more to the center.”

And even if the Democrats do wrest away some Republican districts, then there is the matter of keeping them. Once in the majority, the Democrats would need to calibrate their progressive agenda carefully to avoid alienating those swing voters and losing their majority again, Gyory said.

“Our conference has conservative, liberal and progressive members within the conference. Everyone’s going to have to learn how to work with each other,” said Sen. Luis Sepúlveda, D-Bronx, who said he identifies as progressive. “Governing is the more difficult part. Winning the election is the easier part.”

Andrew Gounardes, a Democrat who is hoping to flip a Republican Senate seat in southern Brooklyn, pointed to his own district as a reason that Democratic control might not immediately signal an onslaught of check marks on the progressive wish list.

“We’ll see some more activism and energy in the progressive wing. It’s great for the state Senate finally to be flipping blue,” Gounardes said of the anti-IDC victories. “But I don’t think this is all of a sudden a radical takeover of Albany by any means.”

Kenneth Shapiro, a former counsel to the Democratic majority in the state Assembly, was more blunt in his assessment: “Some of the people coming in right now are people who are not realistic as to what can get done,” he said.

— What Do the Candidates Themselves Say?

Though they have often been spoken of as one progressive bloc, the challengers differ — sometimes significantly — on their particular blends of idealism and pragmatism. They all agree they want immediately to strengthen reproductive rights and protection for immigrants. But when it comes to more logistically complicated policies, such as rent regulation or health care reform, some signaled an appetite for slow, steady action, while others cited an electoral mandate to deliver on lofty campaign promises.

“For the folks who may push back on some of the progressive agenda that we’ve been talking about, the response to them is simply that the people are not going to stand for it,” said Zellnor Myrie, who defeated a former IDC member in Brooklyn. “There are going to be real consequences for not at least having these things discussed.”

Some of the primary winners said they would be interested in forming a progressive caucus within the Democratic conference. Others emphasized their desire to assimilate into the larger group. Their differences speak to a reality about the insurgents’ victories: that they may have been propelled more by alliances between Democrats of all stripes, who shared a distaste for Republican-aligned Democrats, than by any surging energy in the more polarizing left-most wing alone.

Alessandra Biaggi, who defeated Sen. Jeffrey D. Klein, the former leader of the IDC, said some of her volunteers had disagreed with her on certain stances. Biaggi, a former aide to Cuomo, did not tie Klein to Cuomo during her campaign, although many of the anti-IDC groups that fueled her campaign did.

“But we did agree that it was incredibly important to have real Democrats in these seats,” she said. “That specific starting point allowed the dialogue to begin.”

— And Then There’s the Governor

Cuomo is perhaps the single most unpredictable element in determining whether a fresh-faced, Democrat-controlled Senate will spell sweeping change in Albany. While he has consistently denied enabling the IDC, he has not exactly celebrated its ouster, never mentioning it during a postelection rally on Tuesday.

In a news conference the day after the primary, he also seemed to downplay the significance of the anti-IDC victories. He rejected the idea of a progressive wave that would knock out his own more moderate brand of politics. And he pointed out that some of the IDC challengers had won the backing of major labor unions that also endorsed him over Nixon, a fact that had “made a difference” in their races, he said.

It was that union support — what he called the “primary power in politics” — that had determined the Senate races, Cuomo seemed to suggest, and not any swelling leftist energy.

Some who believed that Cuomo deliberately stifled progressive legislation via the IDC have wondered if he would find new ways to bottleneck policies he opposed.

“The governor, he professes to be as frustrated by the inability of these things to pass as anybody else,” Gianaris said. “Hopefully that’s accurate.”