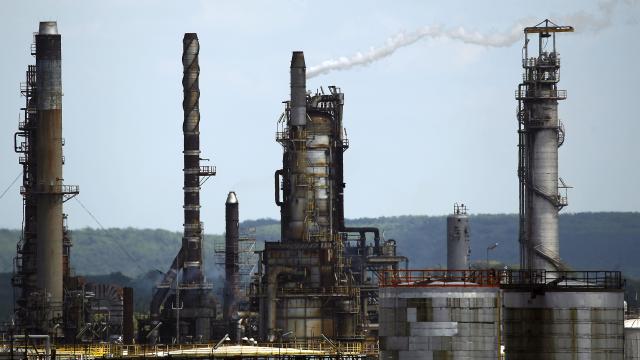 (CNN) — The United States is pumping more oil than any other country in the world. And yet ExxonMobil's oil production keeps shrinking.

Exxon's output has declined in eight of the past nine quarters. America's largest oil company is expected to disclose another dip on Friday when it reports third-quarter results.

The trend is surprising given the shale oil boom that has turned the United States into an energy powerhouse. US oil output topped 11 million barrels a day in August for the first time ever, according to new government statistics. That's more than either Russia or Saudi Arabia.

But Exxon (XOM) was late to the shale revolution. Instead of drilling in North Dakota and Texas, Exxon plowed resources into expensive projects overseas, including ones in Russia that didn't pan out.

"They missed the boat on the shale boom. They're playing catch-up," said Brian Youngberg, senior energy analyst at Edward Jones.

Exxon spent $5.6 billion in early 2017 to buy assets in the shale oil hotbed of the Permian Basin, which stretches from Texas to New Mexico. The deal was announced two weeks after former Exxon CEO Rex Tillerson stepped down to focus on his nomination as President Donald Trump's secretary of state.

That deal, along with other US shale investments, are starting to pay off. Exxon's production in the Permian Basin and Bakken of North Dakota soared 30% in the second quarter. And Exxon signaled plans to pump more out of the Permian, which has turned into one of the largest oilfields in the world.

Investors are hoping Exxon was able to ramp up production to capitalize on higher oil prices. Even though crude has pulled back in recent weeks, prices last quarter were significantly higher than a year ago.

Exxon disappointed investors in the second quarter by reporting a worse-than-expected 7% drop in oil and gas production. Analysts are calling for another drop in the third quarter.

"They need to show improvement. The company needs to get back going to increase confidence from investors," said Youngberg.

Others don't think Exxon's recent production declines are a big deal in the long run.

"People in the oil industry know Exxon is the best in the business," said Jerry Bailey, a former Exxon executive who is currently president of oil producer Petroteq Energy.

"They're run by a bunch of guys in the business, not guys in pinstripes on Wall Street," said Bailey, who owns Exxon shares.

Exxon was held back in the second quarter by technical issues, including unscheduled maintenance that sidelined operations. The hiccups were a surprise because Exxon has a history of being a top-notch operator.

In the long run, Exxon has several overseas projects that look poised to eventually grow the company's bottom line. Exxon is most excited by its development in Guyana, which the company estimates contains 4 billion barrels of recoverable oil.

But turning Guyana into a moneymaker will take considerable time and resources -- something investors may not have patience for.

"They're taking the long-term approach," said Youngberg. "I think it will pay dividends, but we won't be seeing it for another three years."