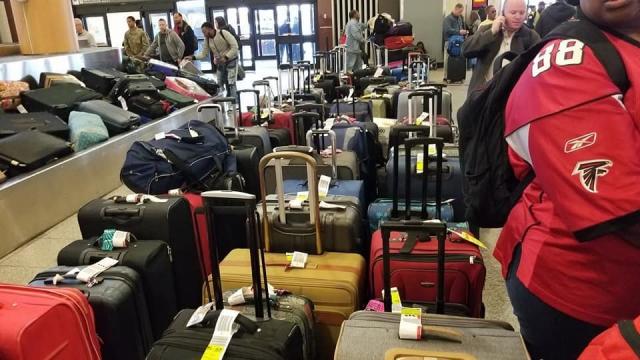 NEW YORK (CNNMoney) — The massive power outage that crippled Atlanta's main airport on Sunday came at a particularly bad time. The city is believed to be a leading contender to host Amazon's second headquarters.

Experts cite Atlanta's cost of living, talent pool and access to the world's busiest airport as some of its top advantages.

But now one of its biggest selling points -- Hartfield-Jackson Atlanta International Airport -- could also be a trouble spot.

"The timing is really horrible for Atlanta," Ilir Hysa, a senior economist at Moody's Analytics, told CNN Tech. "Amazon might be in the process of short listing who's in and who's out at this point."

The airport outage began with a fire at a Georgia Power underground electrical facility, according to Atlanta Mayor Kasim Reed. The fire stranded passengers on planes and in dark terminals. More than 1,000 flights were canceled in and out of the airport. The cause of the fire is still being evaluated.

"[The airport] turns now from an attraction to sort of a problem," said Hysa.

While Hysa doesn't believe the incident will stop Amazon from choosing Atlanta, the outage will likely become a talking point.

"It definitely will be on its radar," he said. Amazon will probably want to learn more about what triggered the issue and whether it has the potential to happen again, Hysa added.

Earlier this year, Amazon encouraged cities to submit proposals to host its second headquarters. The company later said 238 cities and regions across North America sent in requests for consideration.

Amazon says that's it's looking for a suburban or urban area with more than 1 million people and access to mass transit, as well the ability to attract technical talent . The new facility, to be called HQ2, will cost at least $5 billion to construct.

However, Sunday's incident is a reminder of Atlanta's potential infrastructure issues. The city already suffers major traffic congestion, and its public transportation system isn't as sophisticated as other cities, according to experts.

Still, an influx of 50,000 workers to the city would add to existing traffic problems, said Bert Sperling, founder and CEO of Sperling's BestPlaces.

Atlanta is the eighth most congested city in the world. The average commuter spends 70.8 hours in traffic per year, according to a 2016 survey from transportation analytics firm INRIX.

But Sperling doesn't expect drawbacks such as heavy traffic and Sunday's airport power outage to hurt Atlanta's chances with Amazon.

"The [outage] won't make an impact, unless it somehow points to a vast infrastructure meltdown," he said. "[Atlanta] maybe has less negatives than anywhere else does."

"You can't do better than Atlanta if you're looking at an air hub, in terms of connections offered," Ballvé said.