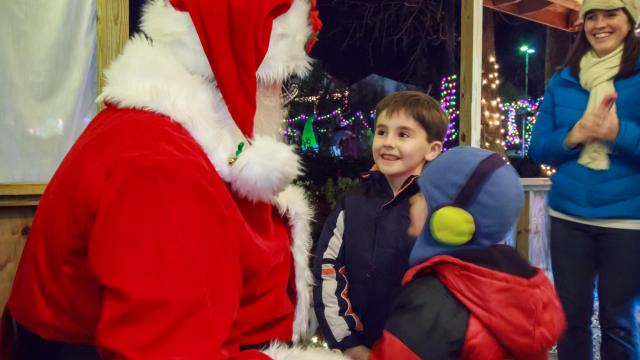 Wilkesboro, N.C. — Wilkesboro resident Steve Clark lives his day-to-day life as a retired citizen, but when the holiday season approaches, he transforms into Santa Claus.

It's a job that doesn't pay, but Clark thinks it is one of the best around, as he receives the opportunity to spread the holiday spirit.

“We had this suit custom made," Clark said. "Told the lady we would like it old world style."

For the past twenty years, Clark has been dressing up in his custom made Santa suit and asking thousands of kids what they want for Christmas.

“The children is what it’s all about,” he said.

Clydesdales to stop in Raleigh for pictures, meet and greets with Santa

Children have requested a variety of items including horses, puppies and even a monkey, according to Clark.

“What’s the monkey going to do," Clark said. "What’s he going to climb?"

The Santa impersonator needs to get creative at times to help kids make more realistic requests. Clark said the child who requested a monkey decided he wanted Hot Wheels instead.

The little boy was one of dozens of children to sit on Santa's lap on Friday during an appearance at a Lowes home improvement store.

Clark said it wasn't much later that a 5-year-old girl sat on his lap and made a heartwarming request.

“I proceeded to say, now what would you like for Christmas. Just as sincere as can be, she said, 'Santa, I don’t want anything.' I said 'What?' She said, 'I don’t want anything'. She said, 'Me and my little brother, neither one needs anything. We’ve got all the toys we need, we’ve got all of the clothes that we need. What we would like is for you to give our toys to children who don’t have as much as us,'" Clark recalled.

The Santa impersonator said the request almost brought him to tears.

“I have never, never in all my years had a child to say anything like that. It was just surreal," he said.

The Santa Question: What should you tell your kids?

Clark said he doesn't normally hug children, but on this day he did.

“This is Christmas, through the eyes of a five-year-old girl." Clark said. "This is what Christmas is about and she knew it.”

Clark said if everyone thought like the young girl, the world may be a better place.