Wildlife making itself at home in Triangle 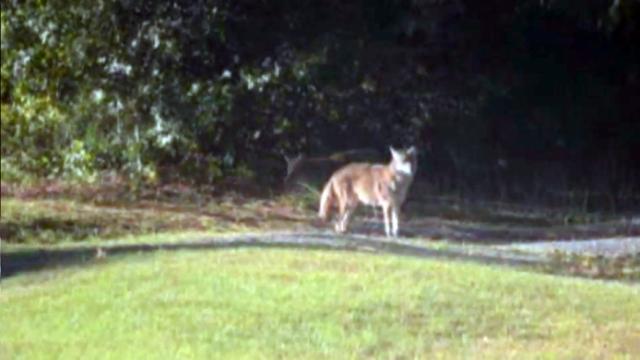 Raleigh, N.C. — Area residents are encountering more wild animals in urban settings, and researchers say people should get used to the idea.

Sharon Mixon said she was walking her dogs one recent night in a west Raleigh neighborhood when she saw a coyote.

"It was pretty scary. The coyote just kept following us," Mixon said. "We stood up on the picnic table, and every time I started yelling at it, it would bark back at me."

Mixon said she managed to get back home safely.

"I could not turn my back on it. I just kept walking backwards," she said.

Her encounter came weeks after a man was stalked in Schenck Forest by a trio of coyotes.

On Sunday, Harry Goodman, 93, was sitting on his front porch in north Raleigh when a gray fox ran up and bit him on the foot.

"I don't blame the animal," Goodman said. "He was doing what he thought was right. You know, we are invading their territory. This was animal territory."

Animals continue to view the Triangle as their territory, despite the growing urbanization and human population.

Coyotes have been in North Carolina for decades – they can be found in all 100 counties – and although biologists don't have hard numbers, Moorman said their population in central North Carolina is increasing.

"If you live near a greenway or parks, I think your chance of seeing a coyote or fox are going to be greater than if you live in the inner city," he said, adding that people who live downtown shouldn't be surprised to see one.

"The urban environments offer protection from hunting. They definitely offer more food," Moorman said, noting that coyotes have been found living in the middle of Chicago.

Still, there has never been a report of an unprovoked coyote attack on a human in North Carolina.

Moorman said coyotes are skittish of humans and typically don't approach them.

"Just because you see a coyote or fox doesn’t mean you should be alarmed," he said.

He advised people to stand their ground if confronted by a coyote and make noise to scare it off.

"I will not walk the dogs without a cellphone now," she said. "I tell the kids, 'Keep your distance.' Wildlife is – we live in a wooded area – it's going to be normal."