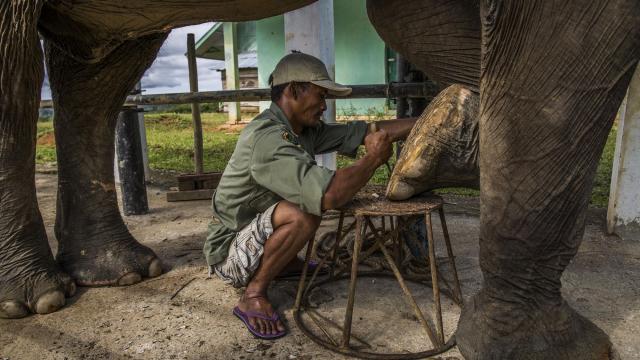 GAJAH MAKMUR, Indonesia — This small agricultural village in the hills of Sumatra island, in the province of Bengkulu, is a testament to happy days in human-elephant relations: When the village — whose name translates to “Prosperous Elephant” — was founded in 1991, residents nursed an injured wild elephant back to health until it one day disappeared into the forest, never to be seen again.

But when wild elephants raided, villagers organized into brigades and used everything they could gather — pots and pans, a megaphone — to scare off the rampaging giants, forcing them to a palm oil plantation elsewhere.

It was just one example of how the rapid expansion of palm oil plantations into elephant territory here has brought humans and elephants into more frequent conflict, especially in remote villages far from ranger bases. Increasingly, that conflict is deadly.

Sumatra, in western Indonesia, has one of the largest populations of Asian elephants outside India. But their numbers are decreasing quickly, from an estimated 2,800 in 2007 to around 1,700 in 2014, the most recent year there was a thorough count. Along with habitat destruction, poaching is considered a major threat to the species.

It is difficult to prosecute elephant poisonings and other wildlife crimes, which in Sumatra include tiger, orangutan and rhinoceros poaching. And that has spurred Indonesian conservation groups to go beyond their traditional advocacy work to conduct independent criminal investigations.

“The government’s resources to investigate are limited,” explained Dwi Adhiasto, who leads the group’s investigators in Indonesia. “To really conduct an investigation, you need a long time. Not a week, or a month, but sometimes a year.”

For example, in the summer, Mawardi, a fisherman in Mekar Jaya, a nearby village, spotted two dead elephants on his way to the river. Elephants do not naturally die in pairs, so conservation groups immediately suspected that the deaths were the latest in a string of poisonings.

But when government investigators descended on Mawardi’s village, they made little headway in identifying the killers — or even locating the victims. “It was totally unclear,” said Sumarsono, 45, a forest ranger who investigated the case and who, like many Indonesians, goes by one name. “No one could find the elephants.”

He said the case had since been closed.

Further complicating matters in these cases, villagers are often reluctant to give information to the police that could get community members in trouble, said Supintri Yohar, a field coordinator for Auriga, a local conservation organization.

The wildlife society’s detectives typically approach poaching suspects, often posing as buyers, to track wildlife parts to market, and then deliver evidence to the police to encourage them to prosecute.

“Our investigators can’t be differentiated from ordinary people,” said Dwi, the leader of the group’s investigators. “When the police conduct an operation, it’s usually clear who they are.”

Dwi said his team had seen results: Of 101 sting operations conducted by Indonesia’s government in 2016 to detain wildlife traders, 49 were aided by the society’s detectives, the group’s figures show.

Other conservation groups are also taking on investigative efforts.

In April, the police in Lahat, a town in southern Sumatra, raided the home of Ahmad Fajrullah, a young man suspected of wildlife trafficking. They confiscated his goods and charged him with possessing seven antelope bodies, one flat-headed cat tail, eight deer skins, one Asian wildcat skin, one sun bear fang, seven Sumatran tiger bones and a hornbill beak.

Much of the investigative work that led to Fajrullah’s arrest had been conducted by Animals Indonesia, a conservation organization.

“The perpetrator had previously sold elephant tusks in a market in Lampung,” in southern Sumatra, said Suwarno, the director of Animals Indonesia. “So we followed him and met up with him a few times, pretending to be a major buyer.”

Once the investigators verified the illegal products in his possession, they notified the police, who swiftly arrested him.

“In an ideal world, it obviously would be law enforcement conducting these investigations,” said Shayne McGrath, an independent environmental development consultant based in Sumatra. “The reality, though, is that now that NGOs are engaging in it, it does seem to improve results.”

Still, that may not be enough to save Sumatra’s elephants. Investigators say elephant poisonings are particularly tricky to prosecute, because elephant killers are generally not repeat poachers, but instead ordinary farmers fed up with having elephants maraud their plantations.

“Villagers will always say they had no intention of killing the elephants, the poison was intended for wild pigs,” said Suwarno of Animals Indonesia. “It’s just an excuse the community can use to avoid a legal case.” Erni Suyanti Musabine, a forensic veterinarian employed by a government conservation unit in Bengkulu, regularly travels to remote stretches of rain forest to conduct elephant autopsies. Though her lab results regularly detect poison in the elephant carcasses, Suyanti said the police had never asked her to testify in an elephant killing case.

Suyanti said conservation organizations with experience investigating elephant poachers, like the wildlife society, did not have teams based in Bengkulu. “That’s why cases don’t make it to court,” she said.

The authorities in Bengkulu have adopted other strategies to stave off poisonings of elephants by farmers.

At a government hill station on the edge of palm plantations in rural Bengkulu, 12 tame Sumatran elephants — former circus performers — have been recruited into a “flying squadron” to chase wild elephants away from palm oil plantations or villages.

“The goal is to prevent conflict,” explained Barokah, a mahout, or elephant rider, patting his large charge, Nelson.

Nelson, a gentle giant named after a prominent local palm oil executive, has a tusk-sized hole in his ear from when a wild male elephant attacked him during one of the clearance operations, making him something of a hero to the squadron’s mahouts.

The village of Gajah Makmur is ringed by charred soil, as locals clear the surrounding rain forest to make room for a palm plantation. As a result of regional development, herds of displaced elephants have begun tearing into palm plantations at the edge of the village, damaging the crops and terrifying locals.

“People ask why the lands that they tend to are being destroyed by these elephants,” the village chief, Gutomo, said. He said it would be difficult to stop his villagers from killing elephants if the invasions continued.

Gutomo then reflected on the village’s bad luck of being visited by elephants. “It’s all because our village has the wrong name,” he said, chuckling.