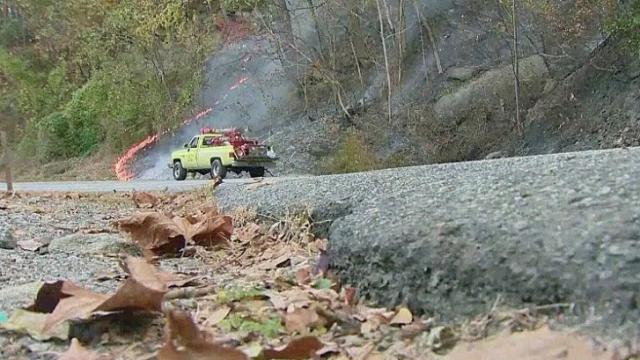 ASHEVILLE, N.C. — Wildfires are still causing problems in western North Carolina and weather forecasters are not offering much hope for help.

Officials said in a new release Sunday night that dry conditions are expected to continue with no rain forecast.

Smoke will continue to cause problems. Air quality problems are expected to continue downwind from fires in Ashe and McDowell counties, with more problems in Cleveland, Rutherford and Wilkes counties.

A total fire ban is in effect for all of the Nantahala and Pisgah National Forests. The North Carolina Forest Service has banned all open burning in 25 counties in the western quarter of the state.

"It's really important for folks to still not burn because we haven't had any rain in a considerable amount of time," said Victoria Tillotson, a spokesperson for the North Carolina Forest Service.

Jack Buckingham lives in a home overlooking Chimney Rock. He was allowed back into his home on Monday.

"Our biggest nerve-racking thing was, we weren't sure if we were going to have a house," he said. "(The firefighters) assured us it would be here and sure enough it was."

The largest fire is the Tellico fire in Swain and Macon counties that has burned nearly 13,900 acres. The fire started Nov. 3.