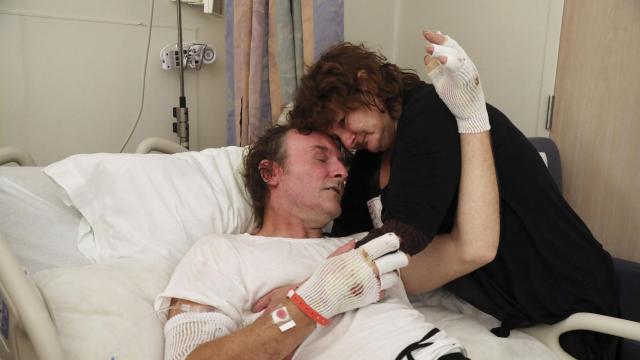 LOS MOLINOS, Calif. — Bill Blevins had pulled himself out of homelessness and addiction with a job as an alarm systems repairman, dexterous work with tiny electrical components that he enjoyed.

But last week he was forced to confront a new hurdle: His left pinkie finger was amputated. It was his third surgery since his hands were ravaged by the wildfire that devastated the town of Paradise, California, last month. And now he’s not sure if he will be able to work again.

Those who were burned but survived are only beginning to deal with the consequences of the wildfire, which killed 85 people with 10 still unaccounted for, according to the Butte County sheriff, and consumed more than 18,000 structures. For the people burned in the Camp Fire, the battle is far from over; many are still hospitalized, facing yearslong journeys of surgeries and rehabilitation.

“Long after people forget that the fire ever happened, across the U.S., there are still people here that live that nightmare every day,” Blevins’ fiancée, Mary Sykes, said as she held a cup of water to his lips as he lay inside their trailer home. “Our lives will never be the same again. Every time he looks at his hands he will be back in that fire.”

The number of people burned by wildfires is not tracked, according to the American Burn Association, but hospitals in areas prone to fire are girding for future influxes of such patients as wildfires occur more frequently.

“We are worried about the increase in fires that we get; it seems like they come fast and furious,” said Dr. David Greenhalgh, who leads the burn division of University of California, Davis, where the Camp Fire victims are being treated. “In terms of taking care of a massive burn, it’s not only the initial care, it’s the weeks and months of skin grafts and dealing with sepsis.”

To deal with the possibility of a large increase in fire burn patients, UC Davis has formed a consortium with 25 hospitals across eight Western states, Greenhalgh said, with procedures in place and medevac helicopters on standby to transfer patients to those burn centers around the region. The hospital has also added another burn specialist to its team this year, for a total of five. “We are ready for that surge,” he said.

On Nov. 8, Blevins was staying with a friend in Paradise when the fire started. He initially tried to flee, but turned back when his car caught on fire. They managed to survive by keeping the fire at bay with garden hoses; in the adrenaline of the firefight, Blevins did not realize he had been burned until he looked down and saw the skin “was melting off my hands,” he said.

Rescuers flew him to UC Davis for treatment. At least 11 people were hospitalized with burns from the Camp Fire, which raged across 150,000 acres. Three are still hospitalized; two are considered to be in fair condition, and one is critical. “Our burn center team’s biggest regret is that they didn’t get the chance to treat more patients,” said Karen Finney, a spokeswoman. “The death toll is heartbreaking.”

Burn care is an intricate and multistep process. Doctors must not only heal the wounds with skin grafts and surgeries, but also keep the body in balance as it recovers. From the moment burn victims arrive at the hospital, they are hooked up to intravenous fluids. That is because the immune system responds to charred skin as a foreign invader — “like it’s a splinter,” Greenhalgh said. The surge of inflammation puts the rest of the body at risk of dehydration, in a sense, from the inside out.

Skin from Blevins’ hip was grafted onto his hands. For some with large burns, artificial or donor skin, which the hospital keeps frozen in a bank, must be used as a temporary patch until the body can grow enough skin of its own for the graft.

Throughout recovery, patients are frequently connected to feeding tubes because their metabolism kicks into high gear: Even lying in hospital beds, patients burn calories about 1.5 times as fast, according to Greenhalgh, as the body goes into overdrive trying to repair itself. Blevins was released Nov. 15, but returned Nov. 29 after infection set in, forcing amputation.

Stroking Blevins’ hair as he lay on the bed in their home, his swaddled hands propped on pillows, Sykes described how he had saved her from a life of methamphetamine addiction, bringing her from Yakima, Washington, to California about five years ago for a cleaner life. Both are recovering from addictions, replacing drugs with the joy of motorcycling side by side. Now they fear that the narcotics Blevins has been prescribed for pain could send them spiraling. “The last thing I want to do is come in as a burn patient, and leave as a heroin addict,” Blevins said. Blevins’ jobs as an alarm technician and a home health care provider took the couple from living in a car in 2014, to the little creeper-covered home they share with five cats and three dogs in Los Molinos, about 45 minutes’ drive northwest from Paradise. They now fear they will lose it. Unlike residents of the fire site, they are ineligible for much of the federal and state aid pouring into the area, because their house did not burn down.

Then there are the nightmares.

Days revolve around mitigating Blevins’ anxiety — a scented candle his fiancée lit set off a panic attack, he said — and his twice-daily bandage changes. It is a painstaking process that takes nearly three hours as Sykes cuts away gauze, removes dead tissue and rebandages each finger.

A few days before his amputation surgery, Blevins said that in some ways, he felt blessed. News reports of his condition led to a reunion with estranged family members, he said, and his bond with Sykes has deepened. Others, he knows, have lost far more.

“I pray to God that the families that have lost will heal,” Blevins said. “The same way I have got to heal physically, they have to heal emotionally.”